Is Gwyneth Paltrow Coming Out With a Food Magazine?

Share All sharing options for: Is Gwyneth Paltrow Coming Out With a Food Magazine? 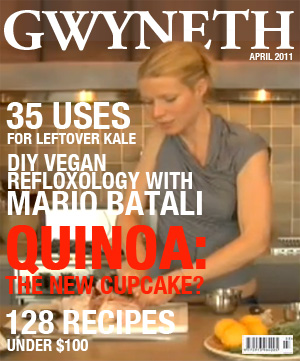 Look out, world: actress/newsletter sender/cookbook author Gwyneth Paltrow is maybe shopping a cooking magazine. A "reliable source" is telling the New York Post that she's "trying to expand her empire outside of the Hollywood realm with a magazine project."

The source also says Hearst — which publishes Food Network Magazine and Oprah Winfrey's O — is "intrigued" by the idea. (Hearst denies there's anything in the works.)

Oh good! We have so many questions: will it be called GOOP, like her email newsletter? Include recipes by pals Mario Batali and, as the Post calls him, food writer Jeffrey Steingrate? Essays full of lofty crypto-macrobiotic lecturing? We can't wait.

· Paltrow Said to Be Cooking up a Food Magazine [NYP]
· All Gwyneth Paltrow Coverage on Eater [-E-]
[Photo: Eater.com]