Fat Ho Burgers is a new restaurant in Waco, Texas, and, as you can imagine, the name has stirred up some controversy. There's even a Facebook group dedicated to getting owner Lakita Evans to change the name! It's called "Keep Waco Texas Positive," and when they reached out to Evans to see if she needed the group's help, she apparently responded by saying "no thanks im good."

Evans is heroically defending the name all over the press. She wonders how her restaurant's name is all that different from Hooters, and, in the video below, tells a local news reporter that the name might be doing some good in this sick, sad world of ours: "Look at what's going on over there in Japan. I mean, it's quite clear to us that this world's not going to get any better...somebody's got to keep their sense of humor around here." 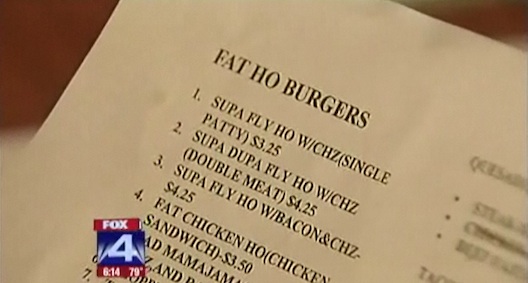 And it sounds like maybe their sandwiches — which have names like "Supa Dupa Fly Ho With Cheese" and the "Sloppy Ho Brisket" — are good? The news report below mentions they've been well-received and does, in fact, show a line heading out the door.