Beth Ditto Says No To Pizza, Yes To Squirrel Dumplings

Share All sharing options for: Beth Ditto Says No To Pizza, Yes To Squirrel Dumplings 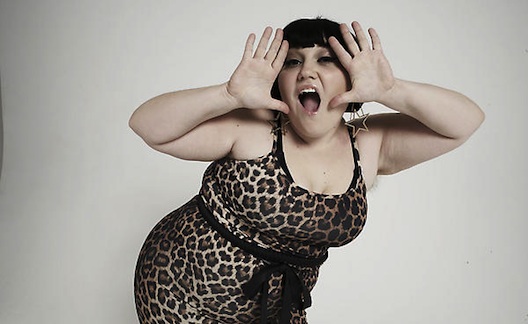 The dance-rock band, The Gossip, has always been defined by infectious rhythm and thunderous vocals. It could also be said Gossip front woman, Beth Ditto, has one of the most distinctive and powerful set of pipes in music. Ditto recently completed a solo EP to be released on March 29 featuring glam club tracks and her signature powerhouse vocals. Beyond being a musical force, Ditto is also an outspoken champion of the LGBT community and has spoken out on controversial topics like body image pressure for women and the defunding of Planned Parenthood. I caught up Ditto this week to chat about her favorite Portland haunts and country eating in Arkansas.

You live in Portland, Oregon now. It's a great food city! What are some of your favorite local spots?
My favorite spots in Portland is Pho Jasmine because I'm friends with the owner, who's amazing, her name's Joy. And I know Joy so well from Pho Jasmine that sometimes when I go in there I forget to order because we'll just talk for so long. They have really amazing, cheap and really good food. I love their tofu there, even though I eat meat. It's one place my girlfriend and I can go to and enjoy together because she's a vegetarian.

There's another place called Russell Street Bar-B-Que where they serve really great Southern style barbecue and play country music over the speakers, which I really enjoy. I really appreciate that actually because I hate when you go into a barbecue joint and the music does not fit the food - it's just not right! Actually I eat at Russell Street so much that they named a drink after me!

Also there's a really great all-vegan bakery here called Dovetail which I really like, my friend runs it. It's all gluten-free, all vegan and it's really good. I always buy sticky buns from her for the morning after.

So is your Russell Bar-B-Que drink called the Beth Ditto?
Yeah it's just called the Beth Ditto, it was actually really embarrassing. I was like, 'Well I guess it just goes to show I eat here a lot.' But I mean, because I eat there a lot I always get my hush puppies for free, so that's great!

Portland has really become THE city for street food. Do you have any favorite local food carts?
Oh my gosh yes! In Portland if you can find a way to put food on a cart or serve something on wheels, they'll do it. If you can imagine a food they'll have a street cart for it -- you name it. Grilled cheese, Hawaiian, vegan, hot dogs. They love street food in Portland. I will go sometimes but a lot of people I know are really really into it. But I'm really a creature of habit, I will stick with the same places all the time basically. Also, it's really cold and wet here, ya know? I mean I feel like it's more of a springtime jam, really. But people do it, they'll sit under those little heat lamp things and eat their hot dog and I'm like, 'ya know, I'm going to go inside where it's warm and eat something else.' But come Spring, I'll eat my vegan hot dog outside!

What other cities you tour in regularly do you dig for the food?
New York and Chicago are great because you really can't get a good pierogi in this town and they are seriously the jam. So I really look forward to going to Odessa Cafe in New York. I was there recently and it was the first time I'd ever had a pierogi and now I always go back there for those.

You've got one of the most powerful voices and are known for your really lively performances. Do you have any food rituals you swear by for keeping up your energy on tour?
We drink a lot of Red Bull and eat a lot of cereal and peanut butter and jelly. That's a true story. We eat a TON of it, because it keeps and we always have a lot of it around. Really a lot of late night eating peanut butter and jelly on the bus. We don't have really refined palates!

Do you have a go-to cocktail or beer on tour?
You know, I'm really not that much of a drinker, I just usually get grape fruit juice, soda and lime?.but that's a really hard cocktail to mess up so it's always good!
I read on your Wikipedia page that you had said you used to eat squirrel growing up and people were pretty surprised by that...
Oh yeah! I recently turned 30 in February and there was a big surprise party in London and my sister was there. Which is a big deal, we're from Arkansas and she had never been to London before. And one of the questions that people asked her the most that whole night was, 'Did you guys really eat squirrels growing up?' And we totally did. It's really normal where I'm from.

It was a really crazy overlap in time, my little sister is 11 years younger than me and so there was an older group of us and then my mom had two more kids afterwards that were younger. And it was really like they grew up in a different era. Like we never ate fast food growing up, we were country people. My granny grew it, canned it. If you shot it you ate it. So there was a lot of that growing up and there's a whole squirrel hunting season in Arkansas.

There's actually a famous story about my granny -- my mom's grandmother -- she's famous for killing three squirrels with one bullet. And so she's famous there! You know, I was watching Coal Miner's Daughter the other day, it's one of my favorite movies, and there's this part where Sissy Spacek (playing Loretta Lynn) is talking to Beverly D'Angelo (who played Patsy Cline) and they're talking about how they had money now and they're really successful and Patsy Cline was making fun of eating squirrel. And Sissy Spacek says, 'you don't like squirrel meat!? I looooooove squirrel.' I was like, 'yeah, see people!? It's a real thing!' And if you get Loretta Lynn's cookbook there's a recipe for squirrel and dumplings like you would make chicken and dumplings.

Do you ever eat any game now?
Yeah I think it really wore off for me at around age six. But I went home last time my friend's grandmother who we all called Mema was making biscuits and gravy and she made it with deer sausage and I found I had a really hard time eating it. Which is crazy because I grew up on that shit. The fridge was totally stocked with frozen catfish and deer meat, so I think I kind of burnt out on it.

And now for our lightning round of favorite picks!
Best burger: You know, I really don't like big thick patties. I like those thin little burgers you would get at a place like Tastee Freez, the kind we used to get in my town. So I'm going to go ahead and say the tiny little burgers you get from McDonald's!
Best pizza: I hate pizza, hands down! But I'm like the only person in the world so I end up having to eat it a lot and choke it down, true story!
Best taco/burrito: La Bonita in Portland, OR
Best barbecue: Oh my gosh that is hard! I eat a lot of barbecue?.I'm going to go ahead and say that all barbecue is good barbecue. There's just no such thing as bad barbecue, ever!
Best coffee: Batdorf & Bronson in Olympia, WA
Best bakery or sweets shop: There's a place in a small town in Eastern Germany that I can't remember the name of but a friend took me there. And there's this one place in the whole country that makes this one kind of amazing marzipan cake muffin thing. And it's really chewy and really dense. The outside of it would be something like a british flapjack, it's really oaty. And then the middle of it is just pure marzipan. That's the best place I've ever been and that was the best treat I've ever had - I wish I could remember the name of it!

Beth Ditto's solo EP is available for download on iTunes

Check out the video for Ditto's single, "I Wrote The Book"