Share All sharing options for: Top Chef All-Stars Episode 14: Make Sure Your Conch Isn't Too Small 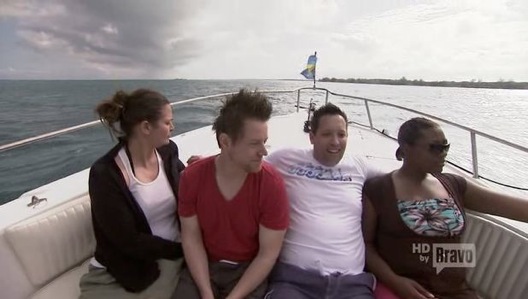 Last night, Top Chef was all about betrayal. Or maybe I should call it treason because I wish it was punishable by death. First, we learn that this week's episode was not the penultimate, but instead the antepenultimate. Like a knife in my heart! Wrap it up, Bravo. You made the call to skip an elimination one week, now it's your responsibility to axe two another week. Don't bull-jive me, bro-bro. This week's other treason? That my once-favorite contestant Richard Blais wears this hat, in the morning. Bad hat: 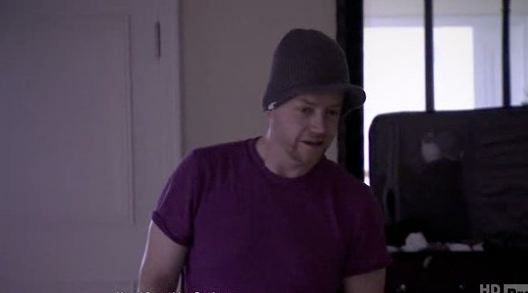 Padma and Lorena Garcia, from America's Next Great Restaurant, greet our four remaining cheftestapants at the Bahamian Club to talk consistency and Quickfire. They're to team up and churn out 100 identical plates in an hour. Padma and Lorena will pick plates at random and judge the chefs on those dishes. I approve of this challenge. The whole "focus on actually making six good plates" got people like Dale a little too far. Mike wants to team up with Blais, because for one, they are boyfriend-girlfriend, and two, Antonia is the black hammer. "She sends people to the losing circle." The Black Hammer? That sounds a lot like a racist superhero from the 80's. (I looked it up, and there was a superhero named the Harlem Hammer. I was close.)

Blais, as always, gets right to developing' some flavor. He wants victory. When it comes to Quickfire this season, his record: "Four wins, never bottom." That's what he said. Isabella calls out the girls for their lack of ambition. While he and Rich make home-made pasta and a bolognese in under sixty minutes, the ladies are prepping what Blais calls the Slice N' Serve: "Piece of tuna, then a salad. Piece of beef, then a mango salad." I do that all the time. "A piece of cheese, then I'm sad." Oh, he said "salad"?

With little time to spare, the teams get 100 plates down. Hungry diners are served. The hungry diners always say things are "well-seasoned" when put on camera. "It's very well-seasoned." Do you mean it has more salt than you use at home? Because that's correct. Otherwise, you are welcome to just say, "it tastes good." I won't make fun of you on this website television recap, which I'm sure is your main concern.

As Padma and Lorena taste random plates of the chefs' food, Mike scoffs once again at the ol' slice and serve. He makes a very complicated analogy: "If I had to do Antonia's dish, I probably could have sent Richard to the store to buy a six-pack while I celebrate the win after doing it all myself." Who is he insulting there? Antonia's dish, Richard's cooking ability, Richard's speed at buying six-packs, Richard's love of beer, how Richard doesn't like celebrating, or his own ability to construct jokes in the subjunctive? 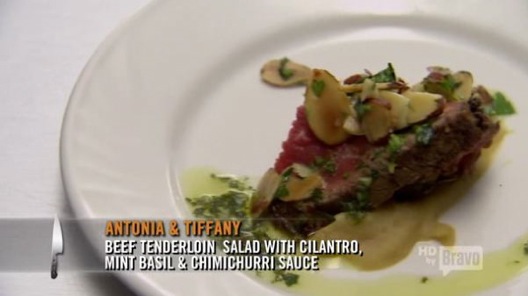 Lorena is impressed with The Guys' ability to make fresh macaroni for the pork bolognese and pecorino cheese, but she'd rather eat the Ladies' beef tenderloin salad with cilantro and chimichurri sauce. As much as it befuddles the dudes, Antonia and Tiffany keep churning out food that people want to eat. Imagine that! The men sulk, and the show goes to commercial break. Upon its return, they decide to show some b-roll footage of a criminal on Cops, apparently. 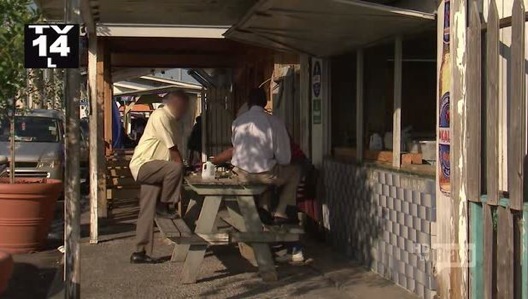 It's the Nassau Yacht Club's 80th birthday, and our chefs will be catering a special deserted island lunch for the Commodore and his wealthy yacht friends. The Commodore? Yeah, I don't know either. They'll need to highlight conch, the national shell food of the Bahamas. Padma and Sammy Hagar show up to drive the chefs to the island. 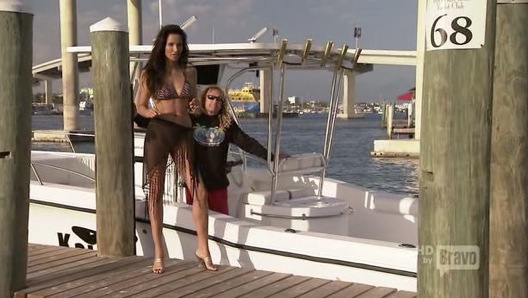 Of course it's very relevant that Padma is wearing a bikini and heels. It's not gratuitous at all, and it will definitely end up being an important factor in the challenge later in the episode. It's called foreshadowing, people. I'm just kidding. It's mostly to get Mike to make this face. 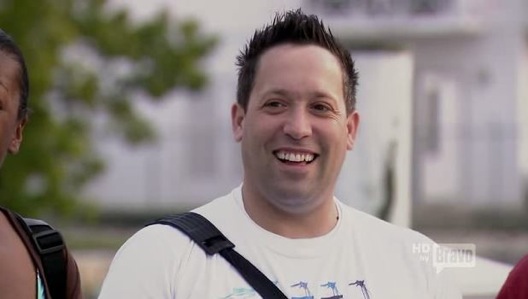 The chefs arrive on the beach, just like in the television program Lost (there are dead bodies everywhere) and tear into the ingredients. Their race off the boat to shore is comically ungraceful. Blais compares their landing to Normandy Beach. Because if American troops had landed in the water like you guys just did, we'd all be buying our Coke Zero with Deutschmarks. 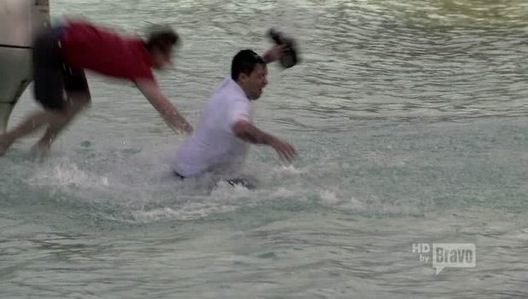 The beach boxes are filled with wonderful stuff, but no conch. Instead of conch, there is snorkel gear. Cool, Mike with his shirt off. Something for the ladies. Blais is not a strong swimmer. Luckily for everyone, the conchs are absolutely planted by the producers every four feet along the shallow ocean floor. 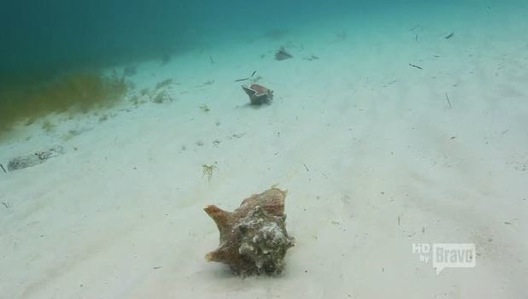 Also why doesn't everybody just walk? Take off your snorkel gear. It would make all this much easier. Blais struggles a lot. 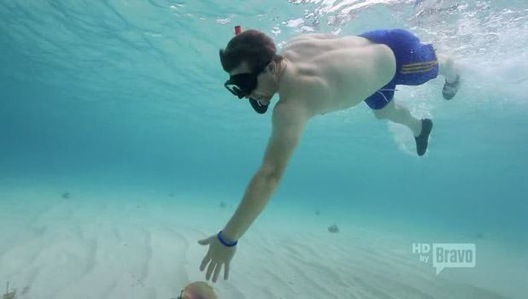 There is some beach cooking. Everybody except Mike has trouble cracking open the conchs. Sand whips around. The fires don't get hot. Blais goes through his usual self-hatred, Antonia makes her very "regular" food, Tiffany seems mostly happy, and Mike talks shit. A normal day at Top Chef.

Our judges and diners gather under a linen tent. They are all dressed in white. Are they about to banish someone from Krypton? Maybe they should banish the ex-Commodore for being Roman Polanski. 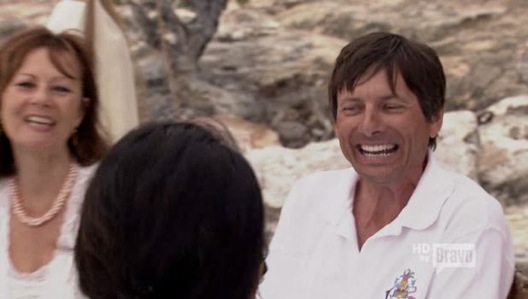 Everyone's food comes out pretty well. Blais serves a Hamptons-style spin on linguine with clams, using the conch and the spiny lobster alongside a homemade sweet potato pasta. That is very impressive to do on the beach and even Tom didn't realize it was only sweet potato at first. Tiffany makes a conch and coconut chowder with a ceviche on top. It's a good chowder, but it's not hot, and even if it was hot, wouldn't it be weird to have the cold ceviche on top? Antonia serves a red snapper with conch tartare and lobster nage. Classic Antonia: a protein and some sides. It's pretty down the middle but as usual that doesn't stop the guests from loving it. Some of the fish is unevenly cooked, though. Mike's got a banana leaf wrapped grouper, over savory pineapple with a conch vinaigrette. It's weird and surprising in all the best ways. Tom could have passed on all the butter, though.

Before Judges' Table, the chefs fret. It was a close one! Richard is worried about how he was the one who didn't do Caribbean flavors. "Mine was too classic." Antonia rolls her eyes. "Yeah, potato noodles are super classic. What's wrong with you?"

The Judges nitpick at a small thing from each of the dishes. Some of Blais's lobster was overcooked, Mike didn't need the butter, Tiff's soup was cold, and Antonia's fish was unevenly cooked. Blais wants the win so bad he can taste it. It is funny the way in which Blais absolutely hates his food right up until he first second someone criticizes it. He doesn't even believe that some of his lobster wasn't perfect. This win would give him the momentum he needs to finish off the competition and win the whole thing. 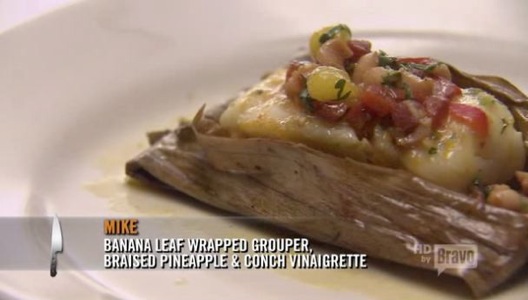 He doesn't get that momentum. Mikey wins again. He's in Blais's head! Maybe he is that good a cook? Who knows, I've never eaten any of his food. And Tiffany, despite making it this far, is sent packing. She gives an emotional goodbye and I'm sad to see her go. It is pretty impressive that a self-taught cook who never worked under a major chef made it this far. Good for her! I am sure Texas will welcome her back with open arms. 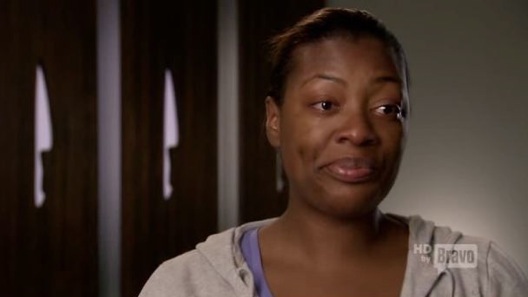