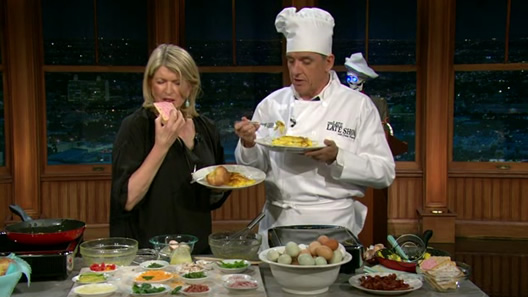 Last night Martha Stewart dropped by the Late Late Show with Craig Ferguson, and it was possibly one of the most important late night segments ever in recent television history (Martha on Colbert was pretty good, too).

First, in the interview segment, they talk about how host Craig Ferguson had preconceived notions of what she smells like, whether or not Martha eats her donkeys, and if shooting birds in Scotland is only a rich people thing. He got to ask her, "Do you ever think, when a holiday comes up, fuck this?"

During the cooking segment — they make omelets using eggs from Martha's farm, of course — Ferguson gets Martha to try a strawberry-glazed Pop-Tart, something she claims she's never even seen. After she says it looks "horrible," he argues, "Well sometimes things don't look attractive but then you put them in your mouth and they're actually alright." Then there's a discussion about how many dates it takes before Martha puts out. She doesn't actually answer the question.

Of note is this exchange after Ferguson tries Martha's omelet:

Holy crap. Mine is like leather compared to that. Now how did that happen, because it's got the same stuff in it? Because you're Martha Stewart, I suppose.
-That's right.
Yeah.
-And you're not.
Not yet! Or, really ever.
-But everybody wants a cooking show. You could have a cooking show if you neatened up a little bit.
I can't neaten up. I can't be tamed, Martha.

Also of note is the exchange about Martha's commute from her offices in New York City to her farm in Bedford:

I go to the farm every night. If I can.
-You travel in and out of New York City?
It only takes 45 minutes.
-Do you have a helicopter?
No, a car. You're not allowed to land helicopters in Bedford. It's one of those hoity-toity communities, they don't allow noise.
-Really? Do they allow Scottish people in a non-custodial...?
You might be allowed in.