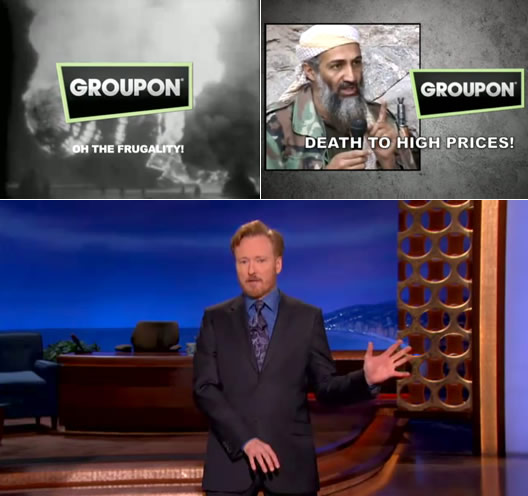 Last night Conan O'Brien aired three controversial and offensive (ie, fake) Groupon commercials that were even racier than the ones aired during the Super Bowl that "exploited" sensitive issues the Tibetan struggle.

One of Conan's "unaired" commercials used Osama bin Laden for savings at a bowling alley ("You'll be the one calling for strikes!"), and another used the Trail of Tears for a Groupon deal on domestic drafts at T.G.I. Friday's.

Another ad used the Hindenburg disaster to promote a Blimpie Sub Sandwiches deal: "The Hindenburg was a terrible blimp disaster caused by a hydrogen explosion... But it's nothing like the savings explosion you can get on a Blimpie's sandwich with Groupon." Oh the frugality!