The New Rules of Beer: Craft Beer For the Big Game

Share All sharing options for: The New Rules of Beer: Craft Beer For the Big Game 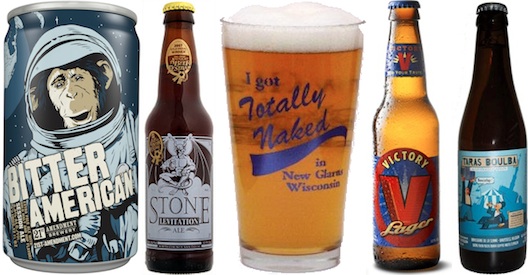 With the Super Bowl this Sunday, the time has come to stock the fridge and cooler with beers, lots and lots of them. This year, no matter how clever and good the megabrewers' ads turn out to be, you have no excuse not to go with craft brews, because of lesson number two in The New Rules of Beer.

Old Rule: Craft beer is way too heavy and strong for the game.

New Rule: There are excellent light craft beers, too. Time to get yourself some cans of the latest low alcohol, full-flavored craft brews.

First of all, the can. The advent of modern American craft beer in the beloved aluminum vessel dates to 2002, when Dale's Pale Ale from Oskar Blues Brewery of Colorado started what they call "the canned beer apocalypse." Today scores of craft breweries are canning, because the brews are easier to take outdoors and are quicker to cool down. More importantly, canning is better for the beer itself (less oxygen in contact with the beer and no light, which spoils beer). While delicious, Dale's rings in at a not-inconsequential 6.5% abv (alcohol by volume), making it no less of a beer but not necessarily one for a long afternoon of watching football.

Enter the session beer. Recently an increasing number of American craft brewers have embraced lower alcohol ales and lagers in response to the arms-race like escalation of strength and hoppiness going on in the States over the past few years. These are sometimes referred to as "session" beers, after the British tradition of mild workers' ale. Generally speaking, a session brew falls between 3 and 5% alcohol (note that Bud Light is 4.2%, as is Guinness Stout), and the point is to enjoy a flavorful, all-malt beer that doesn't wreck your chances of impressing the future in-laws, cooking burgers to perfection, catching the remote when it is flung at your face, or completing any tasks whatsoever at work the next day.

Bitter American, a new seasonal from 21st Amendment in San Francisco, is the finest session beer to come along in a very long time. Founder Shaun O' Sullivan says he and his crew first came up with the beer four years ago and have been tinkering with the recipe ever since. "We love our extreme beers, but the idea was, 'let's be contrary; let's break up your stronger beer session with this. It's more of a power cleanser, a refreshing taste.'"

The result is an extraordinarily crisp, light palate-smacker of just 4.4% abv. It's ideal with pizza and not at all bad on its own, with a surprising roundness of body (thanks to select British barley malt called Golden Promise) and a menagerie of four different hops. The brewers start with Warrior and Cascade, then dry-hop with Simcoe and Centennial, bringing the love, aroma- and aftertaste-wise; this beer will only inflict bitter beer face on crybabies. Are you a crybaby?

Bitter American, available until March and named in honor of "unwitting heroes" everywhere like Ham the astronaut chimp (pictured on the can), is sold across the U.S. (see the company Web site for a beer finder).

If you can't find Bitter American, here are four other excellent, sessionable beers to seek out:

New Glarus Totally Naked, 4.25% - Pale, American-style lager from Wisconsin-only brewers. Rare outside of the state unless it's pirated. New Glarus, you're torturing us.

Victory Lager, 4.8% - It's from Downingtown, not Pittsburgh, but hey, Pennsylvania! Also, it's very good, and the name is obviously a good omen for the Steelers.

Brasserie de la Senne Taras Boulba, 4.5% - a funky, hard-to-find, aromatic Belgian pale ale with musty and floral notes. Definitely an option-play, this is the beer for the die hard craft fan who also happens to be a football junky.