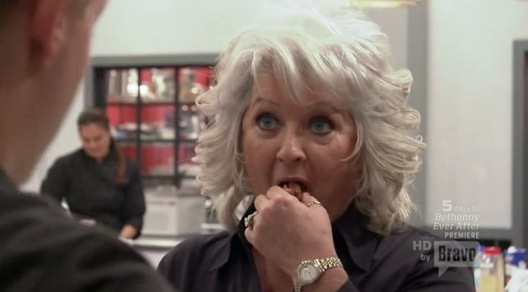 A mere six chefs remain, our dear Angelo the Spy having been jettisoned back to the cold, bone-crushing embrace of his handlers in Mother Russia. And I realize that maybe this metaphor has become confusing. "Is Angelo a spy or an alien, because it seems like you make inconsistent and constant references to both?" you ask. I answer your question with a question: is there a difference between the two? Of course there is, but that we (I) can't tell the difference proves how effective Angelo has been this whole competition, at either being a spy or an alien or both. "I miss my parents in Connecticut and apple pie so darn much that I am leaking saline solution from my human eyes I mean regular eyes."

Before we head to the Quick Fire, Blais and Isabella diddle around at a kitchen table flipping through Blais's Secret Diary, which is filled with doodles of hearts and dream signatures: "Richard Viviani, Richard Blais-Viviani, Mr. & Mr. Richard and Fabio Blaisviani" and so on. Isabella is EXTRA interested in all of Dick Blais's food ideas. He stink eyes some of the sketches, because anytime Mike looks at something he is giving it a stink eye. Why is Bravo showing us this? I am sure it will be of no importance later. 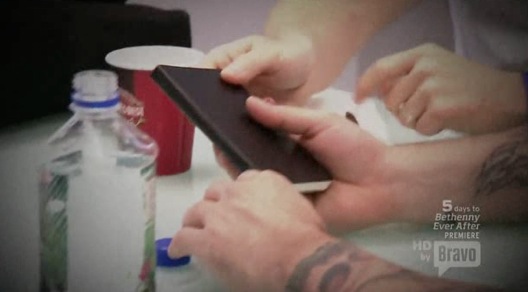 It's Quick Fire time, and our chefs are greeted by the pumpkinny visage of Paula Deen. Their smiles of delight turn to screams of horror as she eats all six of them, one by one, then picks her teeth with Padma. It is very horrible and the show is canceled forever but in some ways I understand because Paula Deen seems very hungry.

She is always so hungry! I love Paula Deen and am happy to see her on the show. It is a rare treat to have a Food Network personality make an appearance on this Bravo program, so let's not waste it. (Though I am still pulling for some guest judging by Ina Garten's husband and former Yale dean Jeffwise Gamgee.) (I am saying he looks and eats like a hobbit from those books.) Paula talks some stuff about how she's Southern. Wait, really? Huh. Weird. Her voice is amazing and I could literally listen to it all day long. It is so dynamic and textural and it has this melodious vibe, like she's hitting 13 notes at once like that blue opera singer in the Fifth Element. 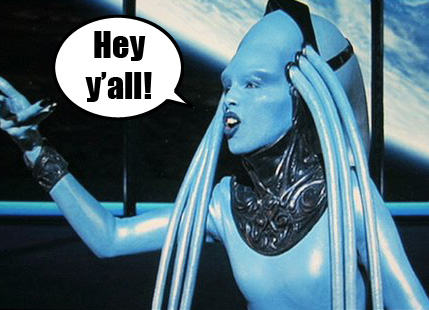 The contestants have 30 minutes to cook something for Paula in a fryer. No doy! The greenest thing that goes inside Paula is Peppermint Rumplemintz and even that is clear. No green for Paula! I am proud to say that I own the exact fryer they use in that challenge. What does that say about me? It mostly says that I'm gross but it also says that I am a fun person to get a dinner invitation from.

Per usual, everyone scrambles for Swanson Chicken Broth and also other stuff. Now here's something that is weird. As soon as Padma says "guh" (she is too lazy to fully enunciate "go") everyone bolts to the Ingredient Zone. But when Richard gets back to his station, it's already billowing with liquid nitrogen? Does his nitrogen tank have an off switch? I realize it's probably just an editing trick, but his mise en place looks like a haunted house at a church community center. 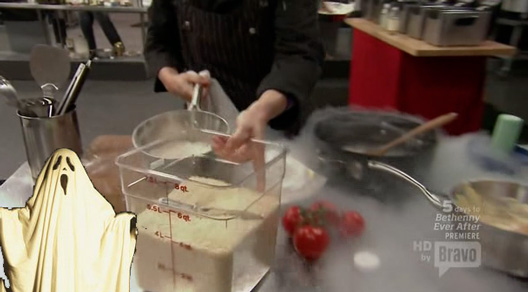 Isabella has this thought process, which he is shameless about verbalizing: "I saw a picture in Richard's book this morning of a chicken oyster served in an oyster shell, and I saw Dale doing an oyster, and people do fried chicken, so probably nobody is going to serve a chicken oyster, which I'll put in a shell, exactly like Richard showed me." Isabella! You are a thief. Won't you even look Richard in the eye? You owe him that much.

Everybody cooks. Paula and Padma come around to judge, starting with Antonia. Antonia didn't plate a second dish, like a dumb idiot. "Oh, Paula's the judge. She definitely seems like someone who enjoys sharing her plate. And Padma is nothing if not very generous." Good one. You are automatically disqualified. And Paula tells her her shrimp and avocado salad would have won, which seems very spiteful to say.

Paula's least favorite dishes are Dale's beef-wrapped oysters and Carla's fried fish with hushpuppies. Paula tells Carla that her hushpuppies were like spitballs, and down South they're so light they float, or something.

Paula loves Blais's wacky-ass coffee-flavored fried mayonnaise and, wait for it, Mike Isabella's Original Chicken Oysters by Mike Isabella. Blais is competing against himself! This Quick Fire just became a LOT like the movie Double Impact. 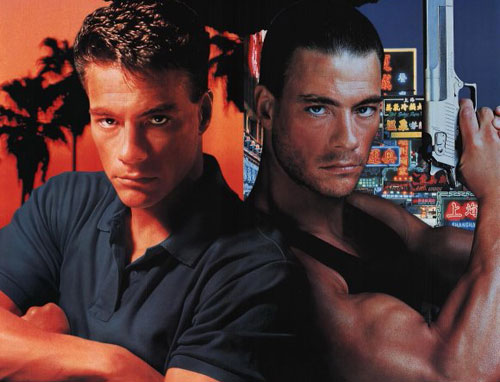 Or maybe it's more like Timecop, and if Blais touches Mike, they'll both explode? Or I'll explode. (JK gross.) Either way, this seems very unfair to Blais, especially considering Mike wins! Oof. That is no fun at all. 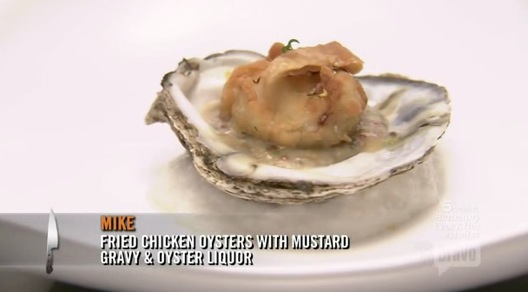 Mike is being pretty relaxed about this whole thing, despite committing a CRIME. Doesn't he know that he violated, as the girls put it, CHEF LAW? You can't violate Chef Law! "There is man's law, then there is chef's law." Remember in the Stallone movie Judge Dredd? Who doesn't remember that perfect movie? 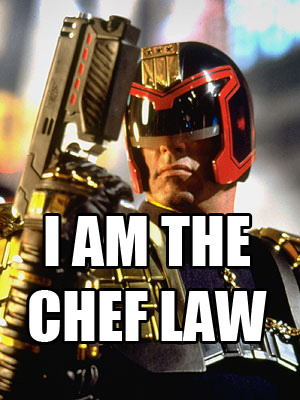 There will be time for sulking later. (Yes there will be.) Famed Louisiana chef John Besh shows up to talk up the Greater New Orleans Foundation, which helps fishermen get their businesses back on track after the various nightmares in the Gulf. I like John Besh. He looks like he should play someone's chill dad on a teen drama. 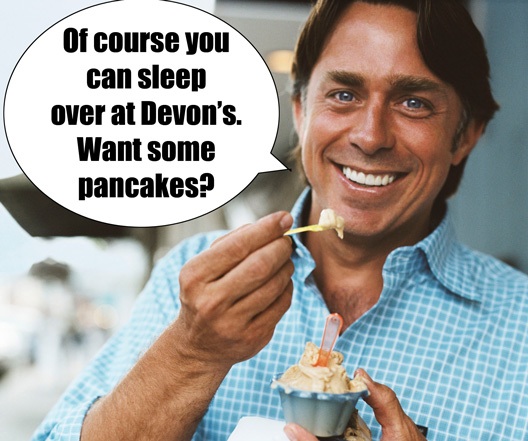 Besh and Paula are hosting a fundraiser to help the foundation, and the cheftestapants will be responsible for 300 attendees' worth of Southern-style Gulf Coast seafood. That's a lot of food! Luckily they have some help. In roll some familiar faces: Tre, Fabio, Spike, Tiffani Faison, Marcel and a still-quivering Angelo. Each carries a Gulf Coast protein with them. Mike gets the first shot at picking a protein and a chef. Tough call! Let's just say some proteins are better than some of the chefs. (Hint: Marcel is terrible.)

Our teams: Mike and Tiffani, Blais and Fabio, Carla and Tre, Tiffany and Marcel, Antonia and Spike, and Dale and Angelo. Fun! Very funny and interesting when I just list information, right? I'll try to do more lists, I realize that's what everyone reading enjoys.

They have fifteen minutes to plan, and there is much to plan. Tiffany, for example, has to plan how much she is going to ignore Marcel (answer: a lot, the correct amount.) Carla starts talking Southern food with her Southern food-expert partner Tre. Tre can't keep up; he's a city boy. Wha-? Carla just shakes her head.

There is much scrambling to get ready for all 300 of their hungry guests. Antonia is slinging Maker's Mark into her sauce. Marcel keeps reminding Tiffany that it'd be a GREAT idea if she used the shrimp heads in the sauce. Again and again. She continues to ignore him, until he shuts her up. This is Dale's impression of Tiffany.

Madness ensues as every single station gets slammed. Blais serves a crispy snapper with pulled pork and citrus grits. Fish and pulled pork? I have never heard of such a thing, but I'm not against it, and Besh is impressed. Paula goes wild for Mike's grits-encrusted shrimp but especially for the potatoes with sour cream and chive. Tiffany runs out of glaze for her shrimp and has Marcel make her another batch, but he doesn't thin it out and it's too sweet for Tom. Carla smothers her fried fish in hot sauce. Antonia's crab cake is delicate. Dale's got a muddled amberjack stew with uncooked potatoes and an extremely mustardy crouton. Things are tough out there.

Antonia, Richard and Mike are called in as the judges' favorites. Richard thankfully gets his revenge on Mike with an Elimination win. He earns himself a trip to Barbados and five grand for airfare. He promises to bring his teammate and life-partner Fabio along with him (and his family, as an afterthought.) 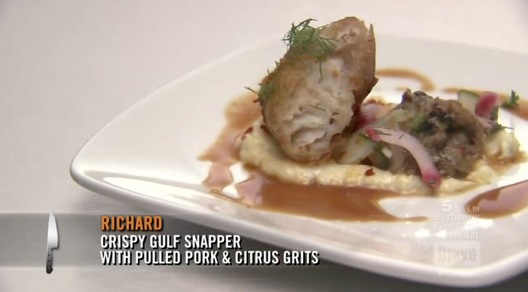 Dale, Tiffany and Carla face the chopping block. Tiffany delegated far too much of her dish to untrustworthy Marcel, but she's woman enough to not mention that to the judges. Carla managed to ruin fried fish twice in one episode, despite being Southern. Is that a record?And Dale's fish stew, or at least the portion he served to the judges, was a total mess. The fish was lost. And that's enough to send him home.

Aw. Poor Dale. I was not a fan of Dale in his original season, and even he admits he did not like himself either that year, but he's been consistently fun to watch as this season's progressed, and I'm a little surprised to see him go home this early, especially after last week's double-win. Oh well. He'll be fine. After he stops crying. 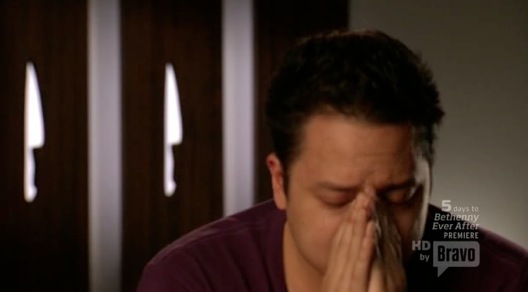 Then Fabio and Richard make out for three hours.