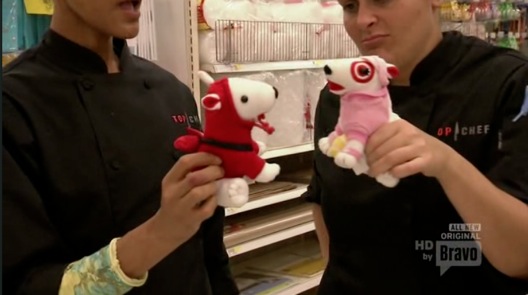 As our chefpetitors stumble and burp their way to the finish light at the end of the tunnel, it's time to put their fates into the hands of two groups of people with notoriously fickle and well-calibrated palates: Muppets and Target employees. One group looks like they love cookies a little too much, and the other group are made out of felt and wire.

Padma greets our remaining contestants with an odd, singsongy cadence: "Well we're on our way, and everything's A-OK." The chefs are all confused because Padma is talking in a crazy way, in that it is not as crazy as she normally talks. "Can you tell me how to get to?" Sesame Street! Cookie Monster, Elmo, and Telly pop up from behind a table. They are creatures from a television program for children, and they will be judging this cooking reality show. Careful, guys! This whole thing's getting a little too real. Last night's episode was like watching security camera footage of a prison in that the stakes were super high and everyone is constantly a cross-eyed look away from a kitchen implement in the gut. Also there is a lot of grab-ass. 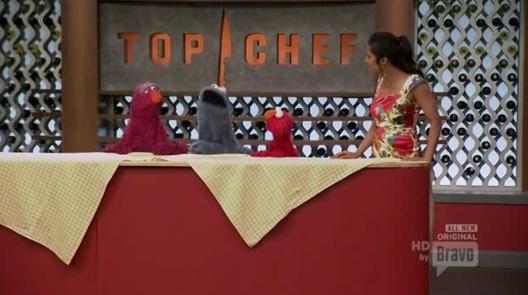 Mike's face speaks for all of us when he shows us how excited he is to see Muppets. 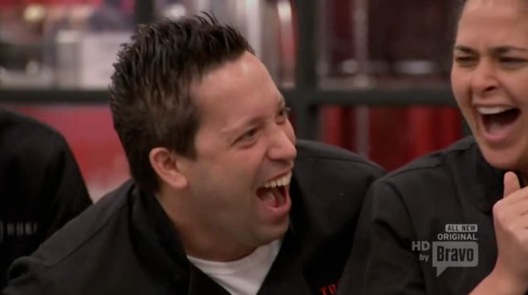 I repeat: Cookie Monster, Elmo, and Telly will be judging this Quick Fire. Can you guess what the chefs have to make? (I hope you don't have to guess. If you read these recaps without watching this show you should sit down and make a list of goals and not put "blogs" anywhere on that list.) He is Cookie Monster, not Omelet Monster, so the chefs have to make cookies. Elmo would like zucchini or carrots in the cookies, because he is a nerd, and Cookie Monster likes "chocolate chippies." Telly remains ever the voice of Muppet reason.

Our cheftestapants scramble to begin making cookies. Bravo nicely presents us with a shot of Swanson Chicken Stock, because this is a cookie challenge. 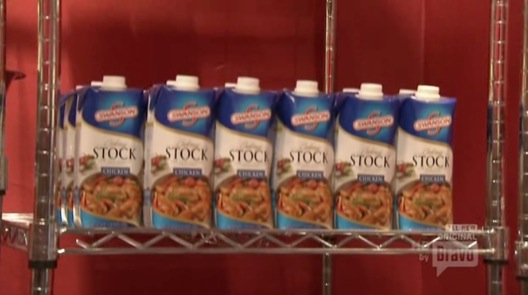 Mike and Angelo have maybe never made a cookie before. Blais wants to impress his child so he gets some liquid nitrogen out. Dale puts potato chips in a blender. It must be so hard trying to figure out whether the puppets will like your food. "This cookie looked appealing, but I found that the large piece of walnuts got stuck in the back of my throat because I don't have a throat just black cloth where my operator's hand goes."

Look, I realize I am razzing these dudes from Sesame Street here, but in all honesty their judging provided some of the few moments of real joy this season. Like, I get that Cookie Monster is a simple character, and possibly a bad influence on children, but I still laugh out loud when he interrupts people (ESPECIALLY Padma) to yell "cookies." In the same way that I found Joey Tribbiani's enjoyment of sandwiches compelling for all 10 seasons of 'Friends', I do not tire of how much Cookie Monster loves cookies. Also, when Padma says that cinnamon and cardamom are actually grown in the same part of the world, Elmo says, "TMI." Ha! Correct. Shut up, Padma.

The Muppets do not enjoy Richard's fake frozen ice cream cookie or Angelo's dry forgot-how-to-make-a-cookie. But they did like Antonia's ooey-gooey whatever and Dale's sweet-savory shortbreads. Dale wins $5,000. He is very excited! I mean, come on, THE Cookie Monster judged him to have made THE best cookie. Could there be anything better? Apparently, yes. "This is probably one of my top three experiences on Top Chef ever." Way to hedge, jerk. Not even top five of your life? Just top three (meaning third) of the one and a half seasons you spent on this television show. Also just a "probably." Dale's gonna have to spend some time doing the numbers at home before he gives his final answer. Nothing's good enough for Dale. 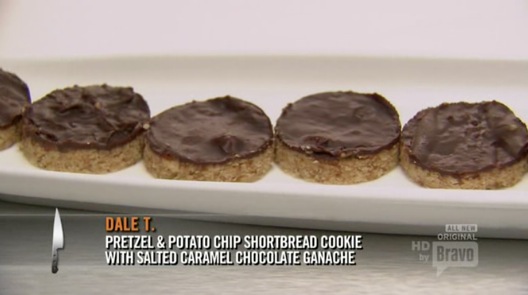 Five grand is nice, but our chefs have a chance to make some real money this episode with the largest pot ever awarded in a single challenge. They could win 25 grand! Where and how? Target of course! The enthusiasm dips a bit when everyone hears "Target." "Oh. Fun." Not Carla. She loves Target! "Or Tar-zhay, whatever you want to call it." No one wants to call it that. Trust me. We are all very much done with that being a fun thing we call it.

They've gotta cook for 100 Target employees. At 3am. Using only food and tools stolen from that Target store? Not even knives or pans! This challenge seems tiring. Also, good thing they don't head to the Target in downtown Brooklyn. That one mostly just has string cheese and pizza rolls. Though heating that food up would be better than what most of the chefs pull off. 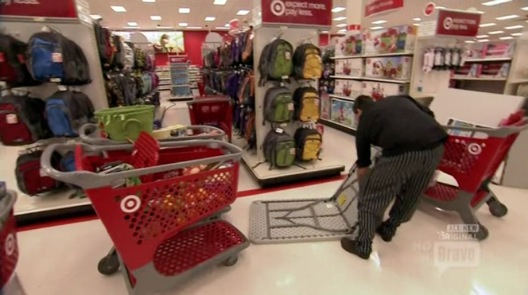 This Target is very big! The chefs have only three hours to "shop" and cook so there is so much running and panting and flipping out. Carla grabs three coffee makers and plenty of linens? Smart. Angelo is doing 100-yard sprints. He says he feels like Carl Lewis. Angelo is just like Carl Lewis, in that he also did not compete in the 1980 Moscow Summer Olympics. (Carl Lewis bowed out due to America's protest of Russia's interference in Afghanistan, Angelo because he was only a few years old and presumably not great at track & field.) Mike says, "I'm not in the best shape in the world" AGAIN calling to mind Martin Short's, "I'm not a strong swimmer." That guy. Get him some Swimmies.

Angelo and Mike are now co-conspirators or something. They have made a vow to get each other to the end. They make lots of jokes and hand each other tools and kiss and stuff. They make out for three hours instead of cooking.

Everyone is making soup, except Dale, Blais, and Antonia. Remember those three names. Is this going to be the employees' late night snack? Or breakfast? I forget why in the hell this is at 3am. I mean, I understand the store needs to be closed but there is no one the particulars of this challenge do not seem miserable for. "Hey Target employees, how would you like to come to work three hours early to eat hot plates of garbage? Don't worry, as soon as you're done eating, you get to clean up the mess these half-asleep donkeys made of your workplace."

Our judges arrive along with the employees to taste the "food." Joining Padma and Tom are Anthony Bourdain, Ming Tsai, and Thomas O'Brien who is Target's Home Designer. They don't give him much to do. I think he sets all the tables? Thanks for the help. The folded napkins really made this fluorescent warehouse supermarket feel "homey" at 4:30am for the people who are paid to be there.

The judges judge. Judge judge judge. I will note that upon trying Dale's grilled cheese, made with steam irons, Ming Tsai remarks, "maybe he's trying to become an IRON chef." Boom! Dynamite. Ming, no joke, take my job, please. Have it. It's yours. I will run your restaurant. "Fire it! Order up!" See, I can do it.

It has been a long night of running and lifting and cooking and not sleeping. This challenge was a brilliant test of any real chef's skill at finding where in Target they keep the extension cords to plug in your soup kettles.

Padma enters the StuRoom and calls in Dale, Antonia, and Richard. Remember those names? FROM BEFORE? I told you. They made real food and they are on top. Blais was the only chef to serve a protein two ways, with pork tenderloin and a braised pork in his stew. Antonia somehow pulled off 100 runny eggs with a parmesan cream. And Dale made a spicy tomato soup with ribeye grilled cheeses. Made with an iron! In case you forgot. His dish was inspired by when he used to be drunk and broke in college all the time, so he'd make sandwiches with an iron? First off, you had an iron? I didn't have an iron in college. Secondly, if you were so down on your luck, man up and eat a cold grilled cheese. "I was so broke I had to find alternate ways to perfectly brown the butter." Dork. But a rich dork. He wins 25 grand, rent for a year. He is very excited! I hope this ranks with his top eight memories from the second half of this season of Top Chef. 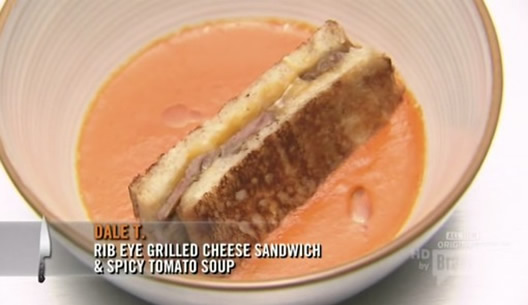 Dale invites Tiffany, Carla, and Angelo back before the judges. Tiffany used a packaged seasoning mix on her "jambalaya", Carla's ginger soup seemed more like a sauce missing a protein, and Angelo's over-salted baked potato soup was nearly inedible. Oh, Angelo. Taste! You must taste. Add water. Add chicken stock. Maybe the Target didn't have enough Swanson products? Probably. Tiffany gives a tearful plea about how it's hard to dream big in her small town in Texas. This is not Friday Night Lights. Relax. Anyway, you have nothing to worry about. Angelo's going home. Even Tiff can't believe it.

Everyone back in the StuRoom is very surprised, in a way probably offensive to Carla and Tiffany. "You? It can't be you. It's not one of THEM?" But Angelo's gone. He is going home. My friend Abe texted me last night: "I have a great passion from since my childhood for the way of Angelo returning to homespace." I could not have said it better. Angelo will be returning to his alien elders, hopefully armed with plenty of useful information gleaned from living among us humans. "As a people, the carbon-based flesh-things do not like baked potato soup." True. We don't. Bye.

Mike and Angelo make out for three more hours.