For the first time in the magazine's 16-year history, Saveur will be running restaurant reviews starting in the March 2011 issue.

The column, written by a diverse roster including Saveur staff members, columnists, and guest authors — including Gael Greene, John Mariani, Betsy Andrews, and Jay Rayner — will be long-form and, by design, not come with a star rating. According to editor-in-chief James Oseland, the reviews aim to be "expansive, thoughtful pieces about very interesting restaurants of the moment" and will be international in scope.

Here now, an interview with Oseland about the motivations behind the decision to start reviewing restaurants, the parameters, the principles, and what we can expect:

How did you come to decide to start doing restaurant reviews?
It was a collective decision, pretty much like all the decisions we come to at the magazine. What we strive to do in the magazine is capture every essence of the world of food that we can possibly think of, and what we realized was that one of the beats we were lacking was a consistent and a very smart look at fine dining.

With a lot of our favorite contributors — in their usual daily lives and work, in fact, as restaurant reviewers — we just ultimately realized, wow, it would be a really splendid thing to give some of our favorite writers a forum in which to write long-form restaurant reviews. Reviews that could almost stand up more as essays, as deeper think-pieces than trade make-or-break reviews.

And in fact, that's one thing we're pretty determined to avoid. We're a monthly, we're not a weekly, and we're certainly not encroaching on a daily newspaper or Sam Sifton's reviewing prowess. Instead, we strive to go really deep and narrow into a restaurant that intrigues us, and ultimately our hope is that the restaurant we write about will intrigue our readers.

That's not to say that if there's something negative to be said or that's less than flattering about a particular restaurant that we're writing about that we would avoid mentioning that. No, to the contrary. We're not looking to go on a restaurant bashing spree. But instead we're looking to write these longer-form really expansive, thoughtful pieces about very interesting restaurants of the moment. 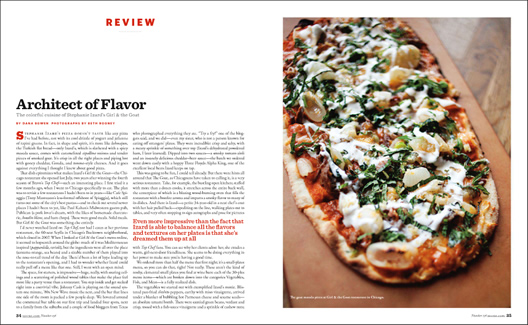 So the reviews will focus on newer restaurants?
Not necessarily. The one that we're going up with first — by Dana Bowen, who's our executive editor — is a review of Girl & The Goat, Stephanie Izard's newish restaurant in Chicago. But actually we haven't planned out the future reviews yet. But the parameters are pretty porous. We're letting our guiding principle be the restaurants that interest the particular reviewer the most. Some of them will be brand-new, some of them will be new-ish, and some will be more like restaurant standards.

International too?
Yeah, absolutely. God this sounds so terrible and Pollyanna, but we want to be turned on by restaurants we here in the states don't necessarily know about so intimately. And Saveur, at its heart, is a global magazine. The hope is, too, that we'll travel to unexpected places like Cape Town, South Africa, or Melbourne, Singapore, Beijing, Bombay, or Istanbul. And not just London, Paris, Rome — although those places would be pretty great, too.

So why no stars?
Ultimately it's not that kind of reviewing. It's a review approaching the form of essay instead. Our goal is to run pieces that couldn't be summed up so cleanly and neatly in something like a star system. It really requires of the reader a good sit down and a filtering through of the story that they just read. I don't know, a star system format, especially in the context of Saveur, just might not be the best approach.

Beyond Dana Bowen, who else will be writing reviews?
Gael Greene, John Mariani, and Jay Rayner will be amongst the few, but we're looking to engage all sorts of voices. We don't have a set roster of reviewers yet.

So they're reviewers and not critics?
Yeah, there is a subtle, semantic difference. There's a literal difference. too. But I think an important one.

Some of the people you've named, they're pretty... let's say... recognizable.
I guess I go back to what I was saying earlier. We're not just looking to do that kind of restaurant criticism or even necessarily that kind of reviewing. A lot of the folks who will likely be doing reviews for us and some of the folks who absolutely are doing reviews for us, they're known commodities in the world of food. You know, it's not 1975 anymore, and sure, a restaurant critic or reviewer can use a false name under which to make a reservation. But service is so finely-tuned in so much of fine dining — not only in America but the rest of the world — there are some pretty crack front-of-house people who can kind of do instantaneous Googling and researching and figuring out. I think those days of absolutely anonymous reviewing have maybe come to pass.

Honestly another kind of goal of this originally — and this might sound highfalutin — is to try to elevate the form of restaurant reviews. And to give great writers the forum to explore these places that they love so much.

Are you going to be writing any reviews?
I might indeed. I don't have any plans for right now, but yeah, maybe somewhere down the pipe, yeah, that would be an interesting thing to do. Funny I hadn't actually thought of that, but now that you mention it, that does sound like a good idea.