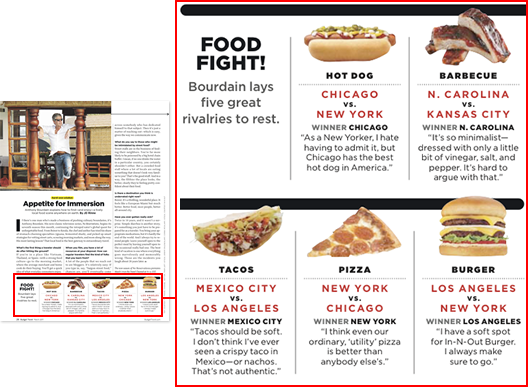 There's an interview with man-about-town and world traveler Anthony Bourdain in the upcoming March 2011 issue of Budget Travel magazine (not online yet) with a great sidebar in which he "lays five great rivalries to rest."

Hot dogs: Chicago vs. New York
Winner: Chicago
"As a New Yorker, I hate having to admit it, but Chicago has the best hot dog in America."

Barbecue: North Carolina vs Kansas City
Winner: North Carolina
"It's so minimalist— dressed with only a little bit of vinegar, salt, and pepper. It’s hard to argue with that."

Pizza: Chicago vs. New York
Winner: New York
"I think even our ordinary, 'utility' pizza is better than anybody else's."