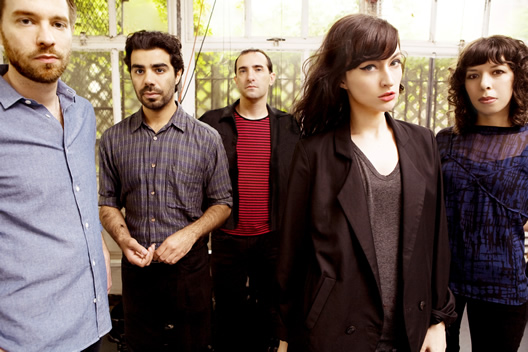 The popular Brooklyn band Apache Beat has seemed to defy genre for years now. Taking cues from New Wave to experimental krautrock, over the last four years they've collaborated with members of the Yeah Yeah Yeahs, The Rapture, and Lightspeed Champion. And they're no strangers to being on the road, either: they've toured the US and Europe supporting acts like Les Savy Fav, Deerhunter, and We Are Scientists. I caught up with the group's lead singer Ilirjana Alushaj to hear more about the elusive Apache Beat and her love of McDonald's milkshakes.

So you have eastern European heritage, correct? Where are you from originally and what kind of food did you grow up on?
Spent most of my childhood in Australia and a little time in Montenegro. Now I live in New York. I grew up on Slavic and central European food... so my favorite things were items like burek [a pastry layered with various fillings] and sarma [stuffed cabbage or grape leaves]. I don't think I had tried anything like peanut butter 'til my teens. My lunchbox for school was pretty weird to most of my school friends.

Now that Brooklyn is home base, do you have any favorite local spots?
Personally, I love Indian food like Jackson Diner, but sadly that is in Queens. Places in Brooklyn I really enjoy are Roman's, Dumont, and Marlow & Sons. Also if you are unlike me and actually like bowling, I think the food at Brooklyn Bowl by Blue Ribbon is great too.

What are your dining requirements on the road?
No oysters as I suspect I am allergic, due to an incident last time I ate them. I grew up not eating pork so I get a bit of guilt when that appears on my plate, but apart from that, I am a pretty awesome dining date. Carefree and hungry.

Do you have any eating tips you swear by for staying healthy on tour?
If you find food that is colored green, I recommend eating it. Also note, service stations are not restaurants, so look for another source of dinner if possible.

What's your favorite city to tour in the US because of the food?
I can say the Mexican food in Los Angeles and the deep dish pizza in Chicago are very, very good.

Describe your best food experience on tour?
Barcelona. Before we played, our minder took us to some amazing traditional Spanish restaurant and I ate and drank so much I needed a nap. Unfortunately napping whilst playing a show wasn't in the cards. The food however was the best, no regrets.

Do you have a go-to cocktail on the road or pre- / post- show?
Whisky and coke pre- and post-. If cocktails are around, I enjoy the pink ones.

On that same note, do you have a go-to hangover cure food or meal?
Fish and chips. And I mean loads of chips (fries). Gatorade is also very good, but I don't think that is a food.

Chains and fast food are sometimes a necessary evil on tour, which ones do you guys hit regularly?
Subway is the safest bet. Mind you I have terrible eating habits and am known to demand McDonald's sundaes and milkshakes on the occasion. Oh wait, Chipotle too... I like that.

Do you guys ever do street food?
Not really. I am too busy demanding McDonald's or sleeping to look at food carts.

You played New York's Siren Fest last year at Coney Island — did you enjoy any awesome/gross boardwalk food?
I have no idea what I ate that day. Possibly nothing, it was so hot and I was wearing a purple sequins outfit which didn't really motivate me to meander around the boardwalk to discover new dining delights.

And now for a lightning round of your favorite picks:

Check out Apache Beat's video for their latest single "Another Day":

Check out Apache Beat's video for their debut single "Tropics":