Will Bourdain Be Alan Richman's Puppet Master on Treme?

Share All sharing options for: Will Bourdain Be Alan Richman's Puppet Master on Treme? 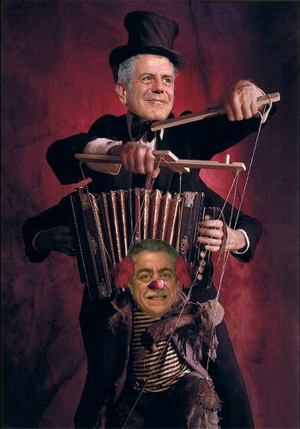 Anthony Bourdain is writing restaurant scenes for the second season of HBO's Treme, including one for restaurant critic Alan Richman who makes a cameo as himself on the show.

The two have had beef since Richman wrote a bad review of Les Halles back when Bourdain was still cooking there. There's even an entire chapter in Bourdain's latest book, Medium Raw, entitled "Alan Richman Is a Douchebag," to which Richman responded by calling Bourdain "a living, breathing, low blow."

Now Richman has to say pretty much whatever Bourdain wants; Treme co-creator David Simon has said revisions to Bourdain's scenes have been minimal. This should be fun!