Share All sharing options for: At 41 Degrees, Albert Adrià Brings elBulli Back (Kinda)

Chef Albert Adrià's Barcelona restaurant 41 Degrees started out as a progressive cocktail bar and then evolved into a 16-seat restaurant called 41º Experience. The newspaper La Vanguardia offers one of the first takes on the new incarnation: it's not elBulli per se, but "it has its spirit."

It also has pretty much the same team (Oriol Castro, Eduard Xatruch, Lluís Garcia, Mateu Casañas y Eugeni de Diego), a long-ass tasting menu of, appropriately, 41 courses, and reservations that are tough to come by. With regards to the latter, safe to say much easier than what they were at the Cala Montjoi restaurant: go online and book a month in advance. "It's unjust but democratic," said Albert. 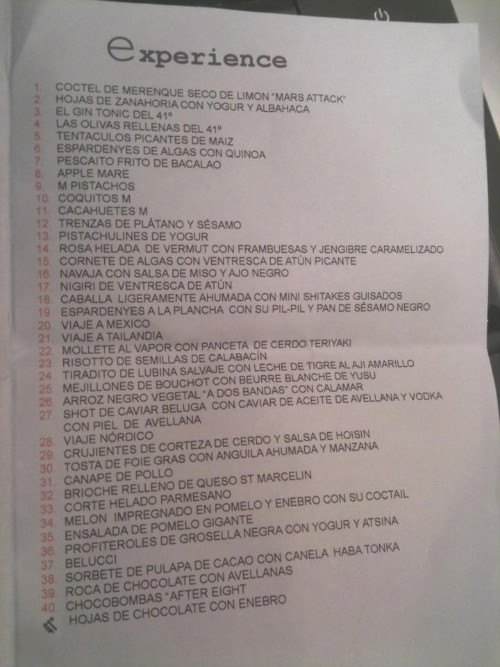 A look at a recent menu [Photo: Gabe Ulla/Eater]

The article mentions that Adrià plans to move the cocktail operation out of the space completely and is working on opening a traditional Mexican restaurant, to be located on the same avenue as Tickets and 41º Experience. "I've always been a man of action. Not one of those that says that something needs to be done. One that just does it."