The Worst Stories on Eater in 2011

Share All sharing options for: The Worst Stories on Eater in 2011

Signing off for the New Year's weekend. See you back here bright and early Tuesday morning. 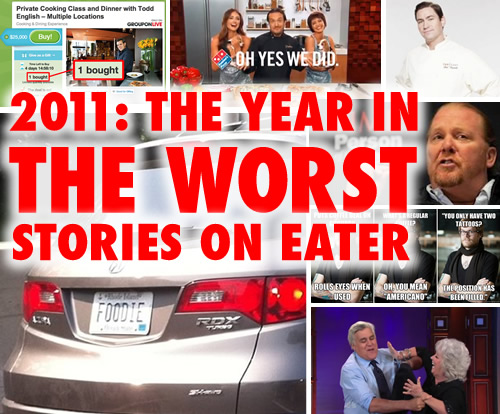 It's the end of the year, and everyone is tripping over themselves to publish slideshows about all the best things of the year. Instead, here are the most vile, cringe-inducing stories on Eater in 2011. Some news is the best, and some news is the worst:

1) The fact that Todd English's Groupon deal was priced at $25,000 was offensive enough, but that someone actually bought it? There are just no words.

2) Pastry chef Morgan Wilson, a runner-up on Top Chef Just Desserts season one, gets indicted with felony charges of possession with intent to promote child pornography. And then he gets federal charges. Amazingly, he's out on bail.

3) Chef Mario Batali, on camera, compares bankers to Stalin and Hitler, causes internet backlash. And then he lamely apologized on Twitter. And while we're at it: the liveblog of the first episode of the The Chew.

4) Batali's partner Joe Bastianich saying he won't open any more New York restaurants because of "those frivolous lawsuits" over frivolous things like tip and wage violations.

5) Seriously, what the hell, Starbucks? Three hidden cameras discovered in your bathrooms this year? That is three too many.

6) John Mariani. In 2011, he butted heads with Bourdain, talked shit about Michelin, and was kind of a dick to Grant Achatz.

7) A Florida man purposefully crashed his pickup truck into a Waffle House trying to kill his wife who worked there. Probably beyond marital counseling.

8) Who steals goats??? They're so cute and baaaaaaah.

9) "FOODIE" is probably the worst license plate of all time.

11) Shouty chef Gordon Ramsay: shouting in Acura ads and his line of kitchenware at Kmart.

12) Cheftestapant Fabio Viviani shilling for Domino's pizza. And doing video livestreams where he posted his mailing address so fans could send him presents.

14) Barista Dustin Mattson, whose photo was appropriated for the hipster barista meme had no sense of humor about it, telling Eater Atlanta: "I do find it discouraging and disappointing that there was so much exposure brought to an attempt at making a joke of a culinary industry and the professional barista."

15) The PCRM, the Physicians Committee for Responsible Medicine, are just a bunch of media-savvy vegan propagandists. From the "unhealthiest cookbooks" to a stupid huttoard to suing the FDA, it almost stops being funny. That is, until the Daily Show went after them.

17) And finally, while not the worst, here are the quitters of 2011: Alton Brown (for quitting his show and Twitter), Ferran Adria, NYT critic Sam Sifton, and ex-Eater Seattle editor Allecia Vermillion. You will be missed.