YACHT on the Uselessness of Yelp and Defending Vegans

Share All sharing options for: YACHT on the Uselessness of Yelp and Defending Vegans 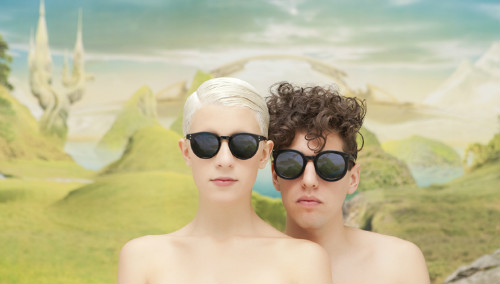 Claire L. Evans and Jona Bechtolt are the principal members of YACHT, a group that has spent the last few years delighting hip folk and music geeks with electropop songs that are as smart and clever as they are groovy and fun. When they need to feed themselves, Bechtolt and Evans enthusiastically do it the vegan way. That's what I got on the phone with them to discuss last week, when they graciously talked about their favorite restaurants and explained why vegans don't suck.

Let's talk about the places you like in Portland and L.A., the cities you're most tied to.
Jona Bechtolt: We could talk about this stuff forever. We can talk about basically any major city in the world. But let's start with the ones we know super well. In Portland, over the last two years, there has been an explosion of food carts, which I'm sure everybody knows. Our favorite spot is Junior's, which isn't strictly vegan. We go there because they have the best tofu scramble in the world. They serve great coffee. Our second favorite place is a Thai-Vietnamese called Thanh Thao.
Claire Evans: They have this one item on the menu which is an eggplant, garlic, tofu dish that I've never had at any other place.
Jona: It's almost like caramelized, in a weird way. It's crunchy. It's a thick, brown sauce and eggplant.
Claire: We refer to it as "The Velvet Food." So delicious.
Jona: Our third favorite place is a food cart called Homegrown Smoker, which is a reference to smoking marijuana! And also smoking barbecue. So imagine those two worlds colliding, in Oregon, for vegans. They do vegan mac and cheese and meatloaf burrito.

Jesus.
Jona: Yeah, and lots of sandwiches as well. They use this thing called soy curls, which is kind of a rare fake meat. It comes dehydrated, in bags. You never see it anywhere. They are these chicken-style dehydrated soy things.

What about L.A.?
Claire: L.A. has this phenomenon of vegan restaurants with similar names like "Truly Vegan" or "California Vegan" or "Vegan Express." Many of them are Thai, and they all pretty much have the same thing. They have really good chicken burgers and hamburgers. They have pepper steak.
Jona: They have the exact same menu at these restaurants, even though they are typically unaffiliated. They have traditional Thai dishes like curry and noodles, a whole burger menu, and then an extensive pancakes and breakfast menu. I don't think any other city has something like this.
Claire: They all have tropical pancakes on the menu, which come with like pineapple and blueberries. But our favorite restaurant in L.A. is Elf Café, where we go eat delicious food, drink wine, and spend time with friends. It's really nice Mediterranean food.
Jona: They do a mushroom shawarma there that is really excellent. Another great thing about Los Angeles is the farmers market in Silver Lake. There's a vendor there called Dave's Gourmet Korean Food. Pretty much all of their food is fermented.

Any other spots?
Jona: Our newest favorite place is a Szechuan restaurant called Chung King in Monterey Park, which is kind of the real Chinatown of L.A. We love spicy food, and it's great there. Only one waitress there speaks English, so we cross our fingers every time we go since it's not vegetarian or vegan.
Claire: It's like a fluorescent-lit restaurant, but there is so much food and its of such high quality that it's great. It's very cheap. I think Jonathan Gold has written about it a good number of times.

How do you guys find out about these places? Vegan message boards, friends, Yelp?
Jona: No, no. We are very against Yelp. We only use Yelp when we need to find a carwash or something. We're really lucky to have friends here. There's a group of chefs called Hot Knives that always gives us great recommendations. There's a great international vegan word-of-mouth underground.
Claire: I was just going to say that!
Jona: Vegan people are really excited about eating in restaurants. I guess it's the equivalent of being a foodie.

Yes, but you guys get a lot of heat from us. What do you say to people that dismiss or make fun of veganism?
Claire: Whatever. Everyone is entitled to their own opinion. Because we have ethical or political limitations to our diet doesn't mean we are austere assholes. We're not hanging around eating rabbit food!
Jona: We're also not obliviously positive about everything.
Claire: Some vegans are nuts.
Jona: There's a lot of shit that sucks in the world.
Claire: There's no reason to write-off a vegan restaurant, especially a good one, because it'll probably be a very creative place.
Jona: Like Elf is a great place to take people who aren't vegetarian, to surprise them. It's not about forcing them to [in a nerdy voice] "eat like we do!" It's just about showing them that it can be amazing.

Now that that's out of the way, what about favorites in other cities?
Jona: There's a place called Pure Food and Wine in New York. And Blossom, which has the only vegan crème brûlée I've ever had. It's made with coconut and lavender and is so insane.
Claire: New York is good for fancy vegetarian restaurants, which you can't always find. Most of the time when you do a special occasion meal, you just go to a place and find the one or two things you can eat.
Jona: There's a place in Tokyo called Nagi Shokudo. It's a café and special interest book and music shop with set menus that change every day. It's some of the best food I had there. It's really simple and organic. In Berlin, a place called Voner, which is vegan doner kebab.
Claire: There's a really amazing place in Chicago called the Chicago Diner. They have, I imagine, what is the only vegan Monte Cristo in the world. It is great. I've never had a regular Monte Cristo before.