Share All sharing options for: The Layover's Montréal Episode: Just the One-Liners 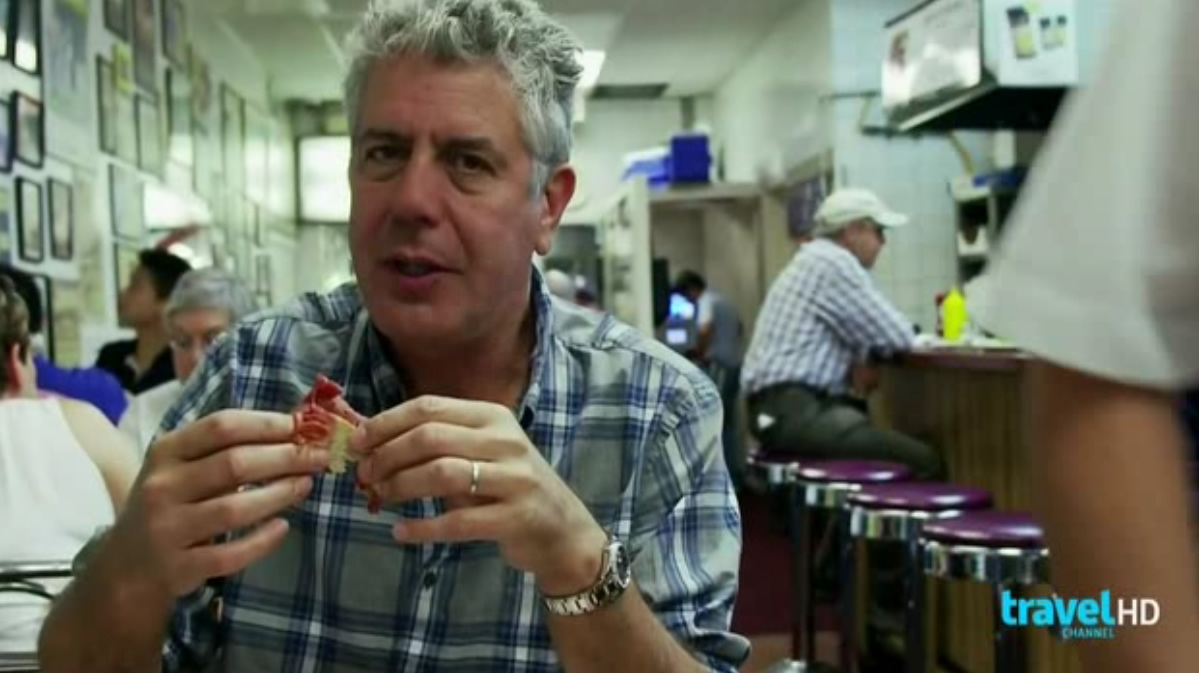 Anthony Bourdain at Schwartz's in Montreal

Last night's episode of The Layover found galavanter and aspiring architect Anthony Bourdain in Montreal. To get some exercise in, Bourdain improbably went dragon boating with a ladies professional rowboat team? But then the real action began: a night out on the town with the Joe Beef guys and Au Pied Cochon chef Martin Picard. Now, on to the the Quotable Bourdain — feel free to add your picks in the comments.

1) On the importance of Montreal: "This is a great country because of this city. Without Montreal, Canada would be hopeless. It's where the cool kids hang."

2) On the dangers of the city: "I don't really know what Montreal is like for normal people. What I can tell you is that for chefs, it's notoriously a very dangerous place." 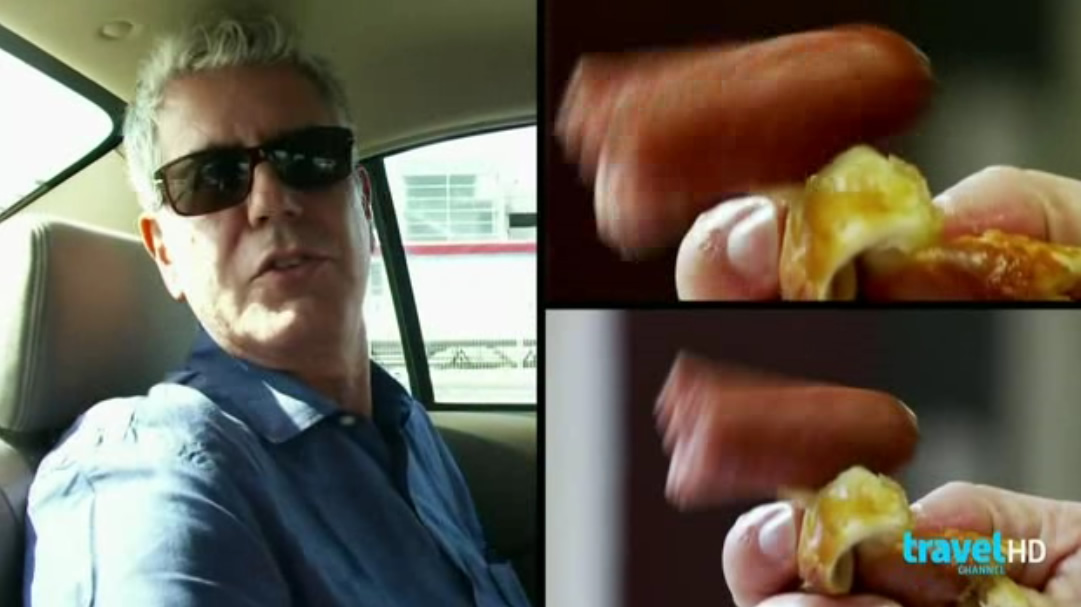 3) On the real hazards of Bourdain's employ: "Such is the tragic circumstances of my life, that I found myself standing around LaGuardia this morning, suddenly with limited meal options, and I bought the pretzel dog. I take a bite and the freaking dog squirts outside of the pretzel tube and it lands right onto my shirt." He needs to check Eater's airport dining guides.

4) On New York vs Montreal bagels: "So the great debate: who has the better bagel, New York or Montreal? It's a completely ridiculous apple and oranges discussion.... I'm a New Yorker so you know where my allegiance lies. But I think it's unfair to both quite magnificent products to try to compare them."

5) On hipster cafes: "If you are a citizen of the people's republic of Laptopistan, and like sitting for hours, sipping a latte, listening to Tracy Chapman, and twirling your soul patch while perusing your Twitter feed, maybe Club Social works for you. Personally I'd rather dunk my head in boiling duck fat." 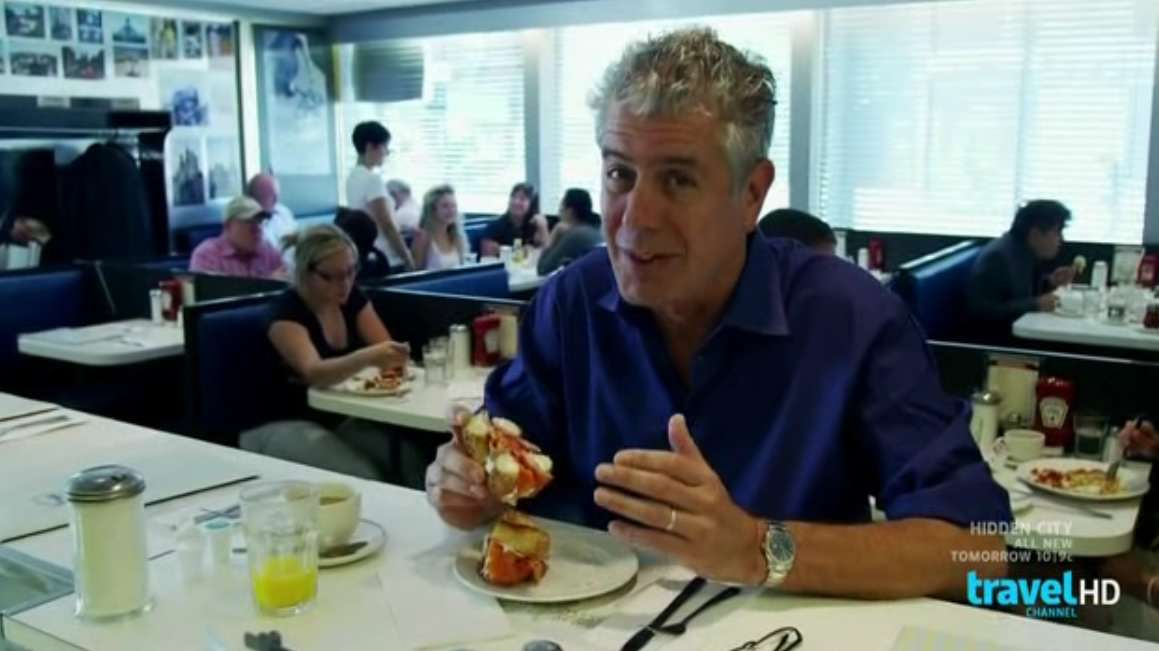 6) On his bowel movements: "I haven't had a morning crap yet. I'm a little concerned."

8) On cheese: "The greatest, single crime against food is they make it so fucking difficult to make cheese as good as it should be."

9) Bourdain jaywalking and getting sworn at: "They have dickheads in Montreal, too. Good to know we don't have the exclusive." 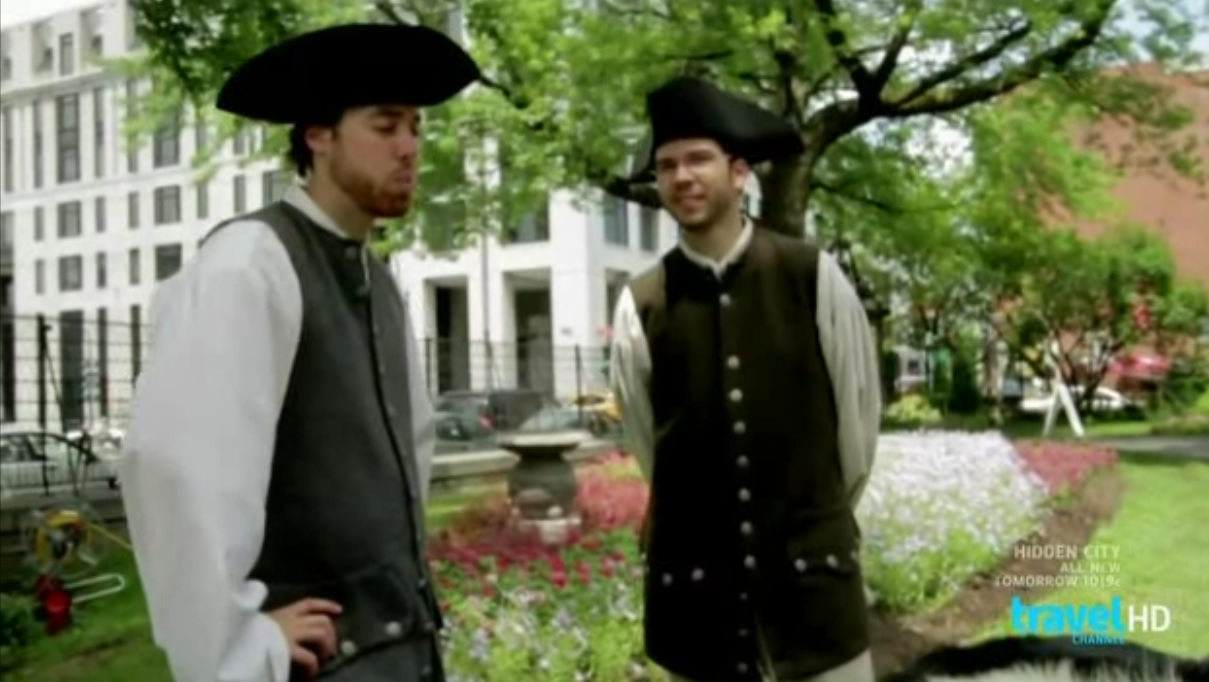 10) On Old Montreal: "Nowadays it's a magnet for tourists and all that comes with that. Mimes, human statues, people dressed up as Colonials. Not so nice. I hate this shit actually."

11) On the guys behind Joe Beef: "The truly terrifyingly dangerous Fred Morain and Dave McMillan.. Known and remembered, often with damaged brains, by chefs everywhere. These guys are legendary for putting the hurt on visiting chefs." 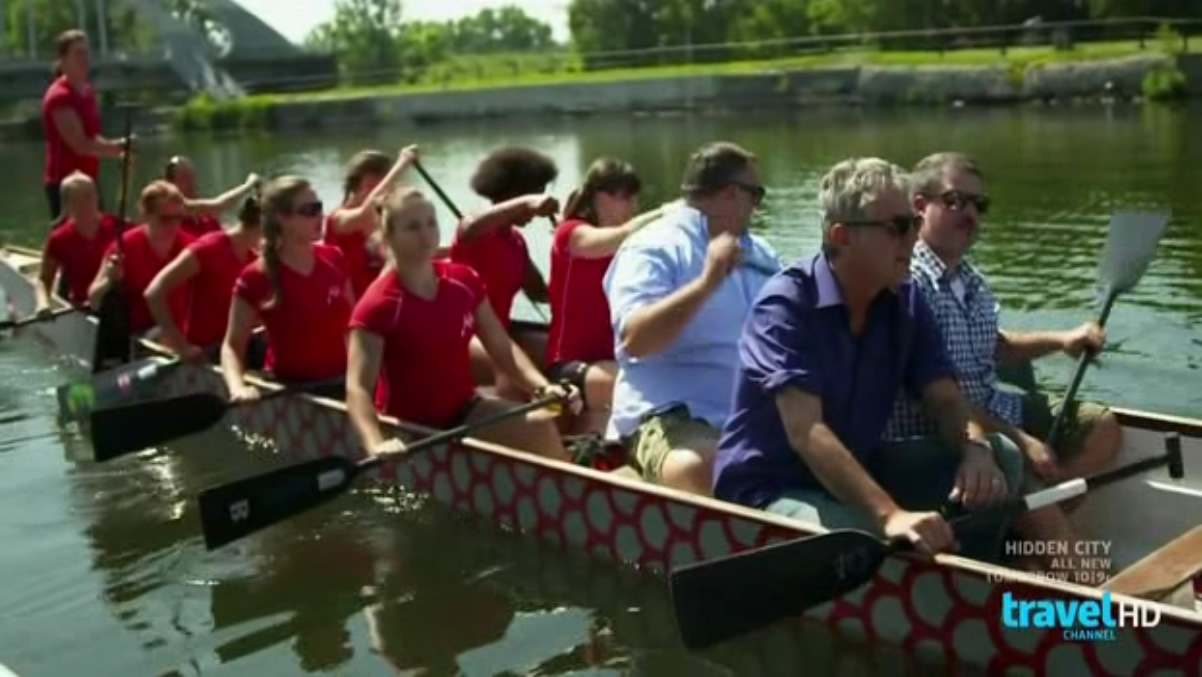 12) On Montreal's activities: "If rowing a boat with muscly women, any of whom could easily snap your neck, does not appeal, then perhaps the highest point in Montreal, Mount Royal, might be more fun." 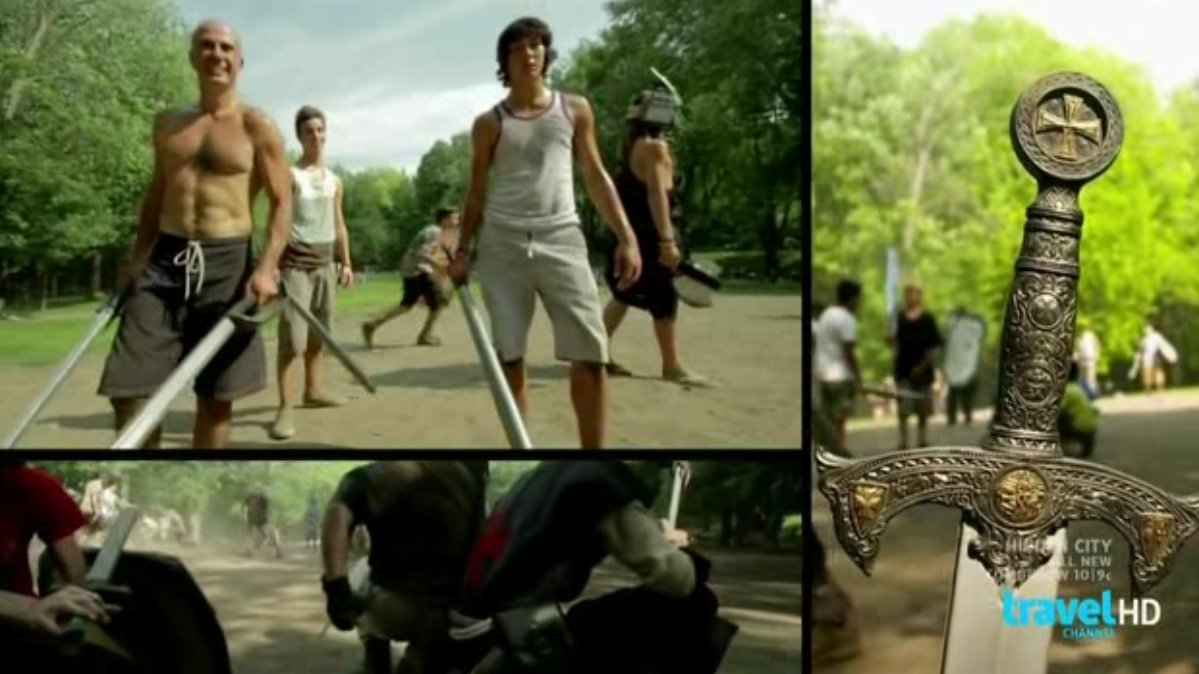 13) On LARPers he finds in the park: "Of course, Montreal is large, enabling a variety of outdoor pursuits I find equally unattractive."

14) David McMillan on cheek-kissing: "I love kissing Americans because they're not ready at all for it, eh. You just go for it, you take them by the hand and you pull them into your zone, and you can feel them crisping up." 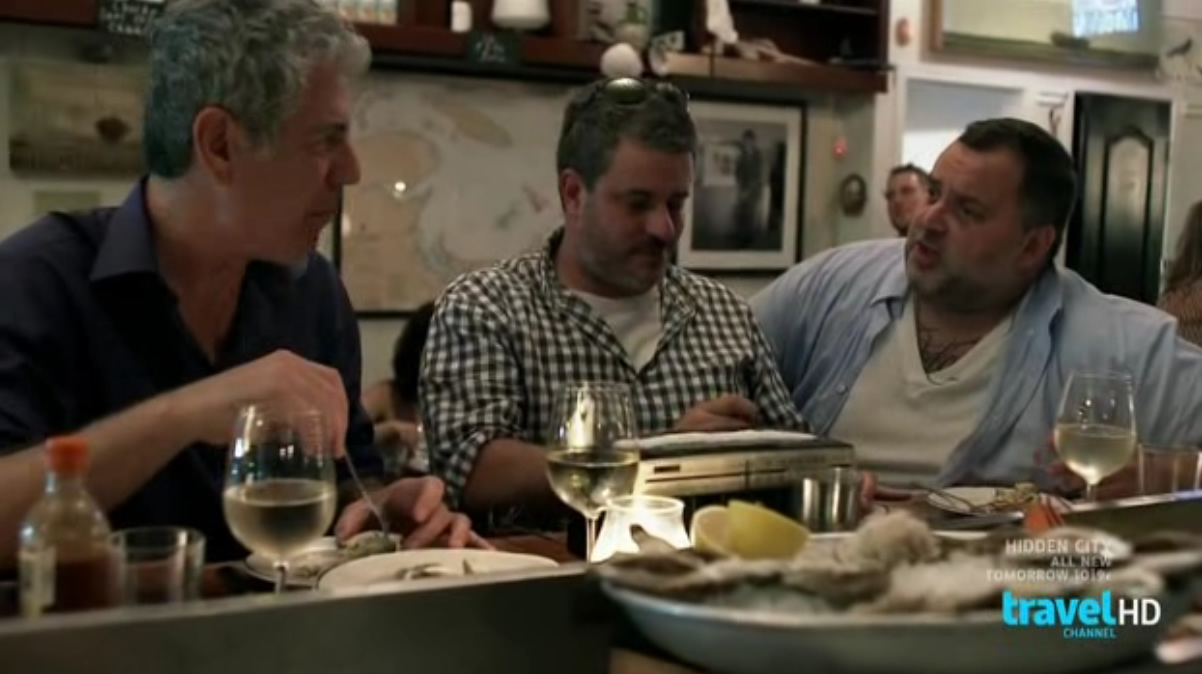 15) On Joe Beef's notoriety: "Mention their names to any chefs who they have ever hosted and there will be an embarrassing anecdote. Unconsciousness, public nudity, scandal, deliciousness." 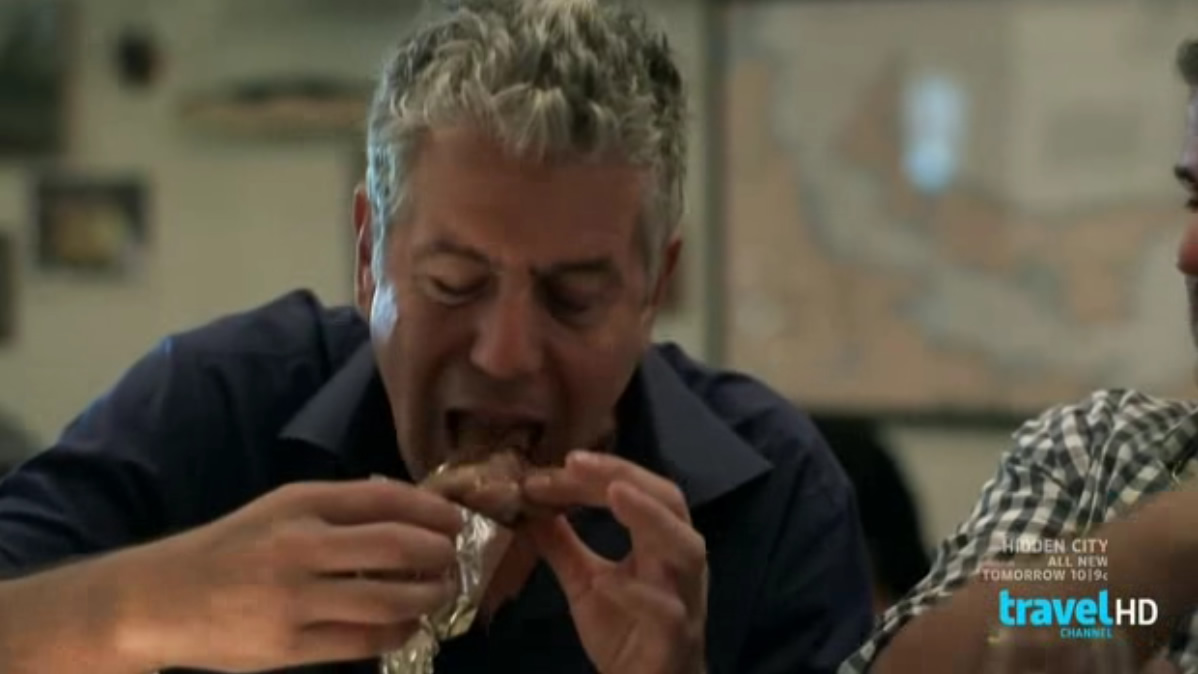 16) On Joe Beef's version of the KFC Double Down (two pieces of foie gras, "fictitious" KFC batter, homemade bacon, homemade smoked cheddar and a gravy mayonnaise): "What's not to like? It's an obscenity and a crime against God and all that is decent. But it's delicious."

17) "If you were to ask visiting chefs and dignitaries from the world of gastronomy who in Montreal is more terrifying, the Joe Beef dudes... or Au Pied Cochon's Martin Picard, you'd get a pretty spirited not to say entertaining argument. But if you were to announce that you'd be hanging out with all of them? All in one evening? No one would believe you. That, by common consensus, would be suicide." 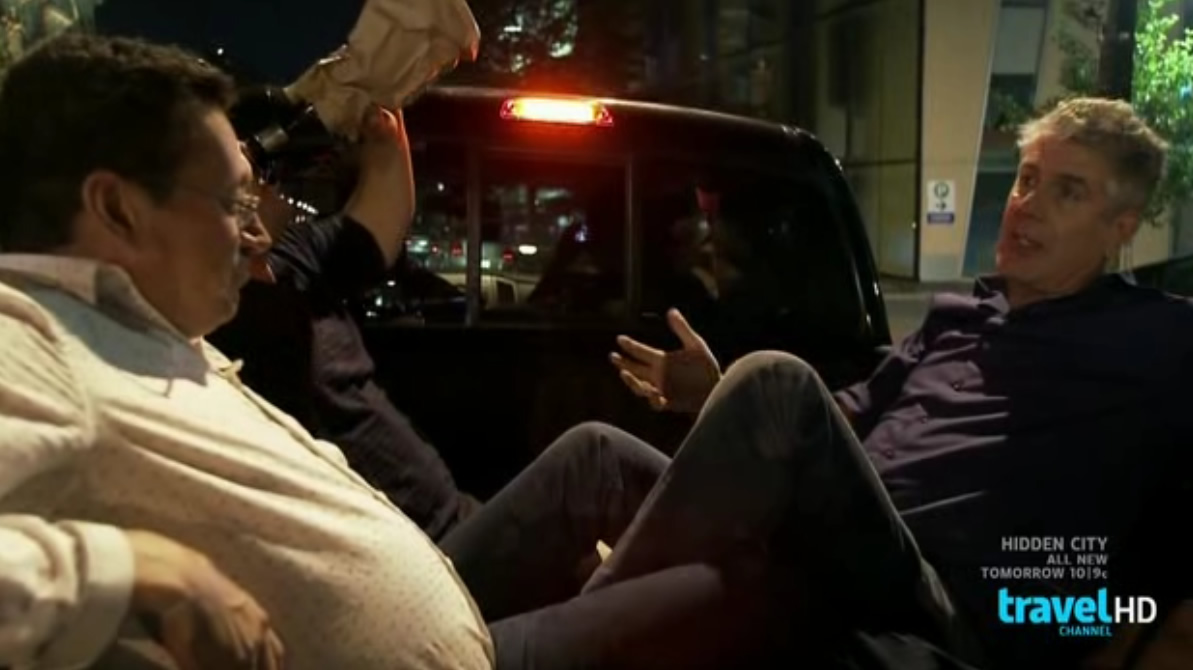 18) On going out: "If I were a reasonable man, a smart man, I would have retreated to my hotel long ago. But I am a flawed vessel. I carry within me, as so many do, the seeds of my own destruction. A Rumsfeldian delusional belief in my own infallibility."

19) On the restaurant Big in Japan that's become Montreal's "premiere service provider for drunk-ass chefs after work": "It's like going into the doctor's office and he's got stirrups and he's putting on the gloves and some machine starts whirring, you've got a pretty good idea what comes next." 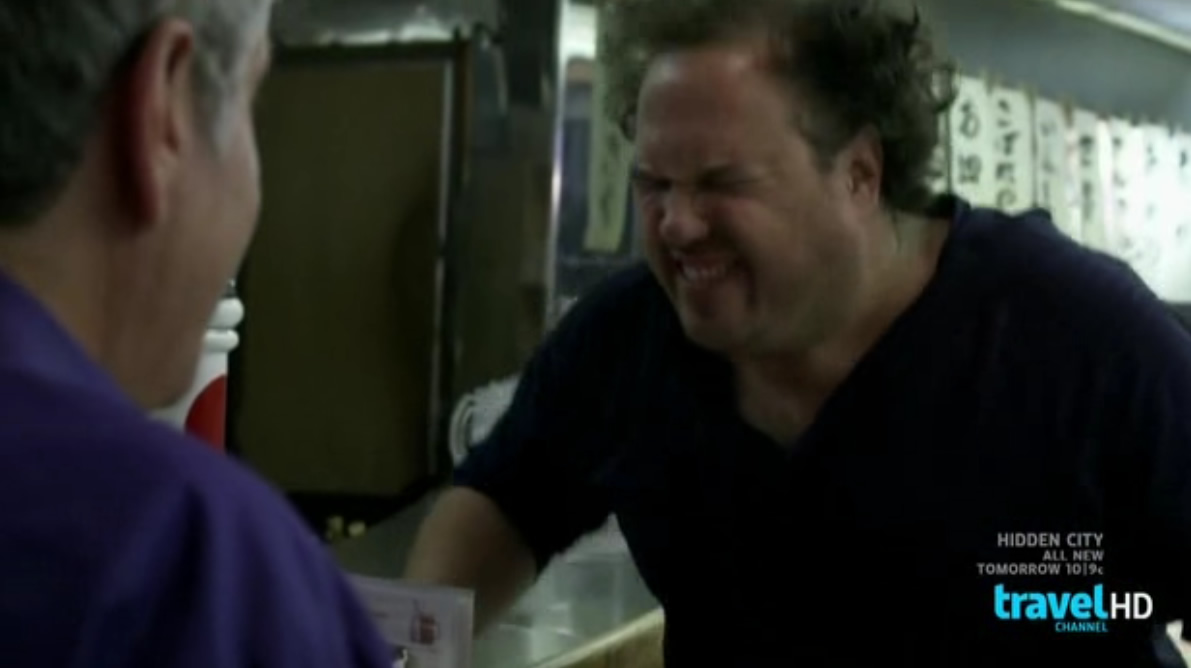 20) A drunken conversation between Bourdain and Picard:
AB: "So you're saying, Celine Dion, she's a revered national hero. An expression of Quebec aspiration and pride."
MP: "She's the greatest all over the world."
AB: "In maybe some alternate Canadian universe. Would you fuck her?"
MP: "You don't have to fuck her! Why would you want to fuck her? That doesn't make sense!" 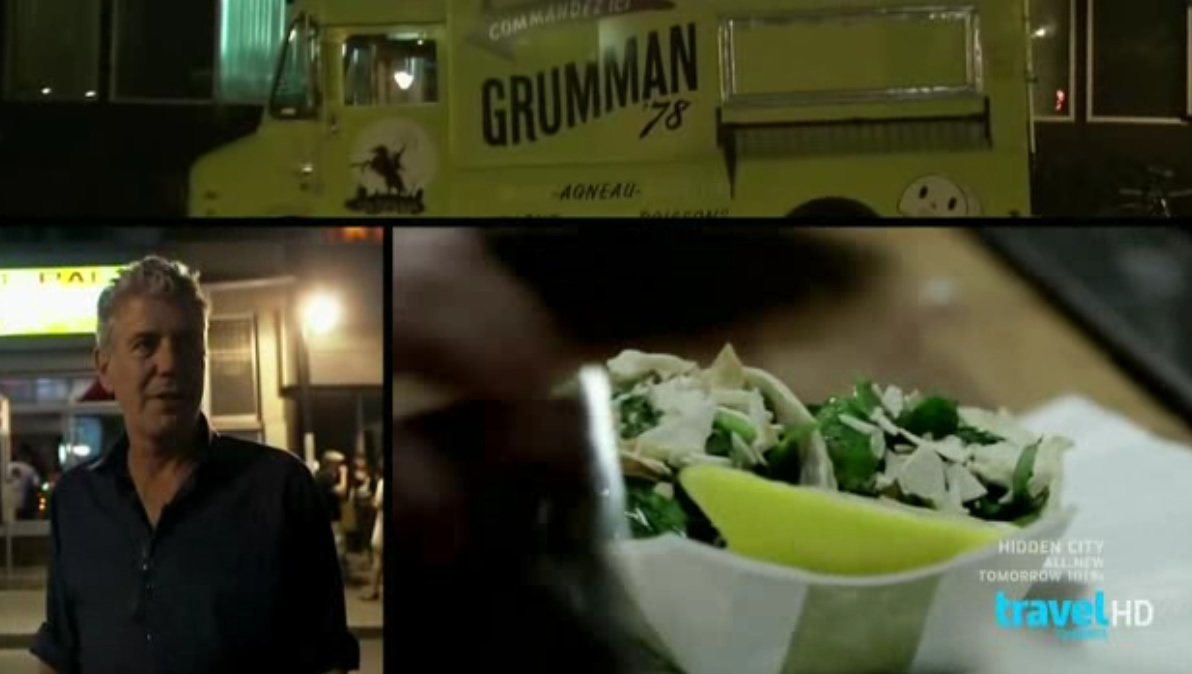 21) On Montreal's long-standing food truck ban: "This is monstrous! They won't let you sell food out of the truck! ... It's a sad law, stuck in antiquity."

23) Joe Beef guys on shady hotels: "You have to watch out for the concierges at the hotels, they can be sometimes very well-greased by more devious Montreal restaurateurs." 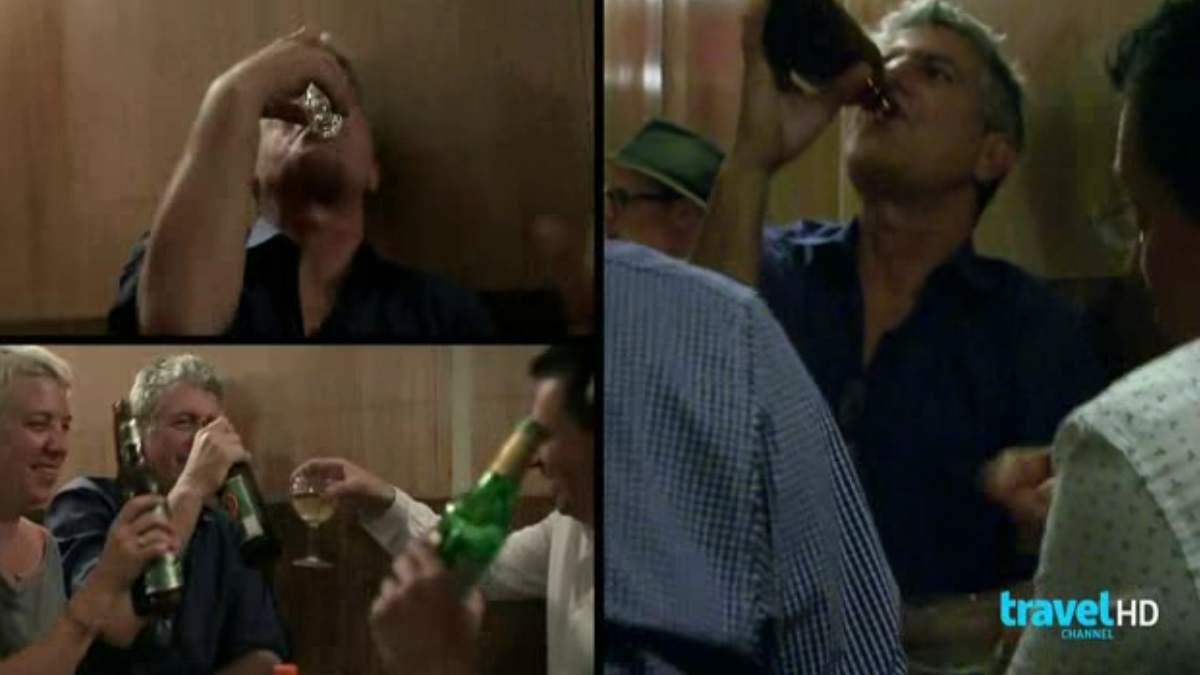 24) On his night: "There was, to the best of my recollection, no karaoke, no lap dances, no drunk dialing of my fourth grade social studies teacher... Still, I rise, I pack, I cough yellow bile into the bidet."

25) Before he leaves: "Maybe I'll be stopping off to get some over-the counter codeines, they're legal here. And some other low cost pharmaceuticals. They should really give us their drugs. And their chefs. And Neil Young. We can give em back Celine Dion."