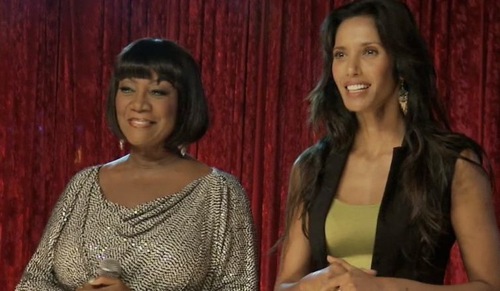 Have you settled down from last week's drama? My blood pressure is still 80 over angry. (I don't know how blood pressure works.) If you forgot, Heather chomped down on Beverly hard and then picked her teeth with the bones. This week's episode begins with the contestants still cooling down in the stew room. The beast snorts, "That was an emotional roller coaster." Everyone is speechless. Heather makes such a face. All her faces are such a face, but this one is special. 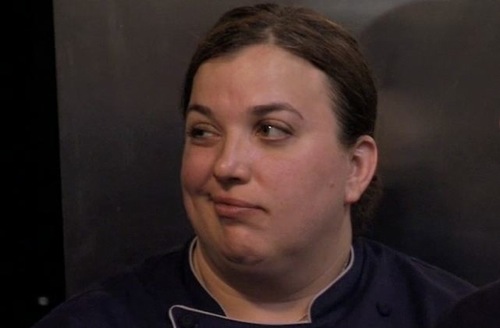 To everyone's surprise, Padma glides in with a sudden announcement. Our chefs are anxious. Do they have to cook more tonight? Is one more person eliminated? Does Padma stay young by drinking whatever potion is inside that giant chili pepper necklace she's wearing? 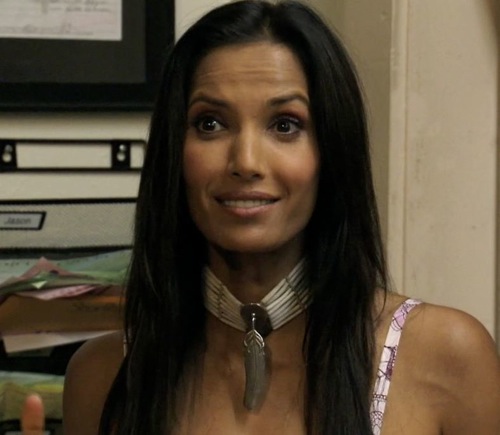 The chefs are heading to Austin in some Toyotas. There is road trip-style bonding. Heather makes a very shaky defense for not having a family at 40 because she has remained focused on her career. That's probably why she doesn't always turn the charm on, she's afraid to tractor beam in men and let them get in the way of her ambition. Everybody calls Chris Crary "Malibu." It might be because he is "pretty" and obsessed with his appearance, and it might be because he has admitted to owning a Chevy Malibu with a trunk full of women's underwear he stole from gym lockers. There's no way to know which is true, but one of them is, so that gives each a 50/50 shot of being a real thing. Paul, an Austin native, reveals that he sold weed for cash from the ages of 15 to 22. (At least he had the sense to sell it for cash and not Pokemon cards or something.) He decided to turn his life around when he woke up one day after partying and his dog had shit everywhere. Were his dogs partying? Did they eat the weed or something? It's a confusing story. 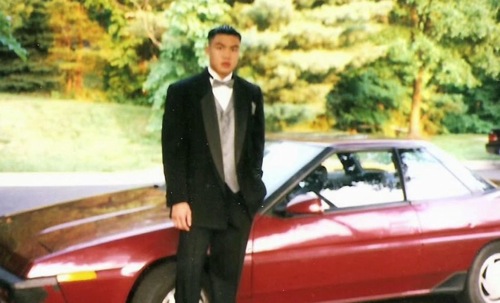 The Quickfire involves social media. Cool, that is very cool. I'm so excited. I love sosh meed. Top Chef 2.0. Padma tenuously connects Twitter to Austin's South By Southwest and says the challenge will be decided by Top Chef's Twitter fans. This all happened months ago, you may remember, so I hope you didn't try to tweet at Padma last night live. Ten grand and no immunity are on the line. Padma is already a little buzzed and hops up on the counter to read Twitter over Tom's shoulder. 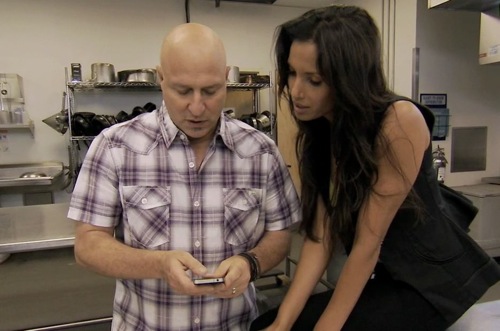 Unsurprisingly, the three tweets chosen sound a lot like they are producers that work for the show. "Everyone always says bacon makes it better. Let's see if it's true." "Do a hash for a #hashtag challenge." "Hand off a pantry ingredient to another chef." Whoa, bringing in the common man to the process has really changed things. Bacon, hash, and one switched ingredient? I don't know how the chefs will be able to handle the pressure from all this insanity. Ed and Lindsay both got Sriracha and they are losing their minds. Mix it with mayo and put it anywhere. Trust me.

Tom's least favorite dishes are from Grayson, Chris Jones and Ed. Grayson made a shrimp puff with a bacon hash cake, but it is less a light and crunchy puff and more of a wet turd of mousse. Chris Jones' corn puree with bacon, potato hash and a seared scallops looks great but he over-salts the potatoes and makes Tom's face pucker up (even more). Ed burnt his potato hash.

The standouts are Beverly, Sarah and Paul. Beverly made a crispy pork belly in the pressure cooker, something she's never used before. Sarah made a burrata stuffed squash blossom and a bacon and zucchini hash, and Paul made a very unusual looking plate of bacon fat, crispy bacon, blackberries, chorizo and mushroom hash. It does not seem like much on screen, but it earns him the win and ten grand, making Austin temporarily proud. He immediately buys an ounce of weed and his dogs shit everywhere. 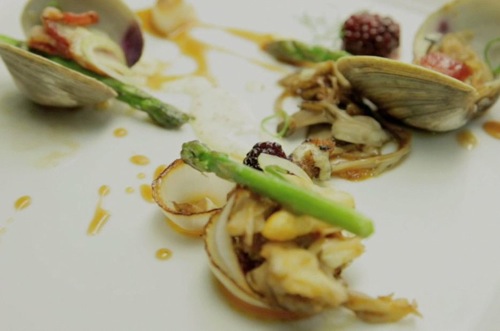 The chefs head for a relaxing drink at the Driskill, a bar I'm confident looks much less like an airport lounge when it isn't being lit for reality filming. Everybody has some usual drinks and laughs, and I'm definitely sure there is nothing suspicious going on when all of sudden the piano player says, "Ladies and gentlemen, please help me welcome Miss Patti LaBelle." What? Who? 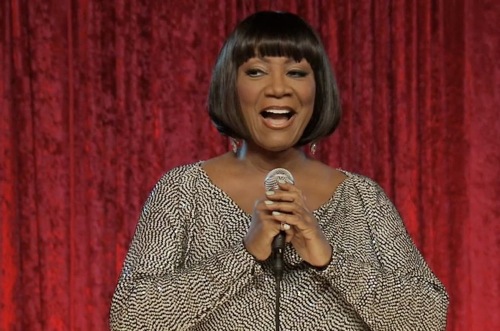 Miss Patti LaBelle comes out and everyone kind of sort of loses their minds. It is mostly awkward. It's so bright it feels like being in the middle of a yogurt commercial. Miss LaBelle is a legend and worthy of celebration but this bar is about the size of my apartment and it's lit like an airplane hangar and no one's seat is facing the stage and LaBelle just starts tearing into "Lady Marmalade" nine inches from the chefs' faces. No one is sure quite how to act, except Ty-Lor who is sure he should act like this. 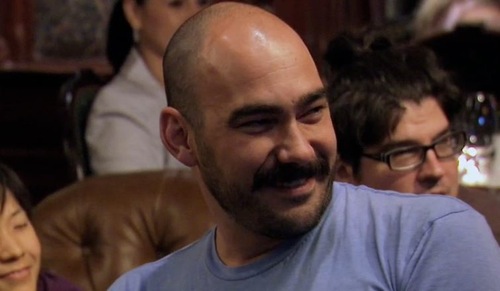 After this extremely intimate one-song performance, Padma tells the chefs that this week's Elimination Challenge is to cook for the judges, Patti, and her friends a dish that honors one's culinary inspirations. Almost without exception, this means cooking grandparent food. That is a nice and meaningful thing that will be ruined when people inevitably screw it up anyhow. Chris Jones is going to make his grandma's famous crack sauce. 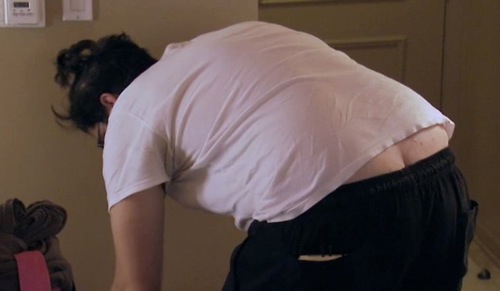 Ed will be cooking a simple, vegetarian dish like his (duh) grandmother used to make; they were poor and rarely had meat. (The family not the dishes she'd make, though maybe them too.) His grandma was the one who kept Ed in line, telling him to clean up and "shave your stupid beard." It is really a shame his grandmother is not here with him in the Top Chef house, because shave your stupid beard. 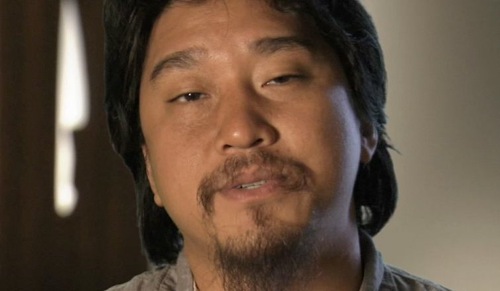 After two hours of cooking, dinner is served. Patti and her friends Nadine and John dine alongside Padma, Tom, and Chef Emeril. Patti takes many opportunities to talk about how glamorous her life is, lest we forget. She tells Tom that at her house she serves an 8-cheese macaroni and cheese with shrimp and lobster. That sounds disgusting, Patti! Do you live in an Olive Garden? When you are here at your house, are you family?

Some of the chefs' family members are honored: others are left disgraced and rolling in their graves. The judges praise Sarah, Ed, and Beverly. Beverly makes a Korean braised short rib with edamame scallion puree with hon shimeji mushrooms. Ed made a simple modern bibimbap with lemon chili sauce, a fried egg on top of a rice cook. It was sparse but looked incredible. Sarah cooked a pork sausage stuffed cabbage with spinach and brown butter. Her dish was perhaps the last impressive presentation, but it was the favorite of the judges. She wins! I will say that as much as this show pisses me off sometimes, when nice people cook good things and get praised for it it warms my heart in a genuine way. Happy holidays. 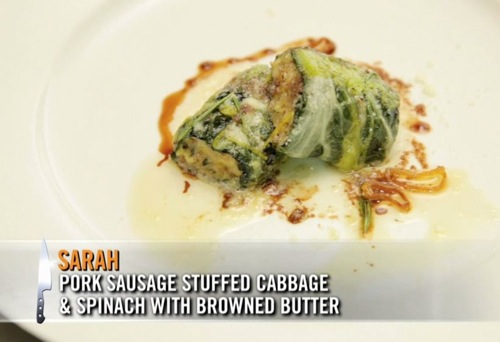 Grayson, Heather, and Chris Crary are the ones who don't love their families enough to do a great job here. Grayson made a very literal tribute to her childhood: she cooked the meal she probably had every week, a gigantic grilled rib eye with German potato salad and grilled vegetables. There is nothing special about it, the meat was gristly, and the whole thing was not up to Top Chef standards. It's very Black Angus. Chris Crary threw a lot of flavors on the plate and cooked his salmon too fast, covering it in albumen, which is gross. Heather tried to make beef stroganoff, but she second guessed herself and avoided the pressure cooker. She cooked it too slow to sear it and too fast to braise it, and the meat turns out stringy and unrecognizable. Here is where you think her overwhelming personal charisma would win her a pass to the next challenge, but strangely, the judges haven't been charmed. She's sent packing. Beverly believes that karma has punished Heather and she's probably right.

Last week I misspoke when I said we'd never see Nyesha again. Last Chance Kitchen is some thing that's happening on Bravo's website that I'm ignoring, and Nyesha's still in it, where last night she kicked off Heather for good. She says she will wipe the smile off Heather's face, and she does. Thank you Nyesha. I hope to see you again soon.

By Terri Ciccone and Eater Video