Blackalicious' Gift of Gab on Eating Like a Big Dude 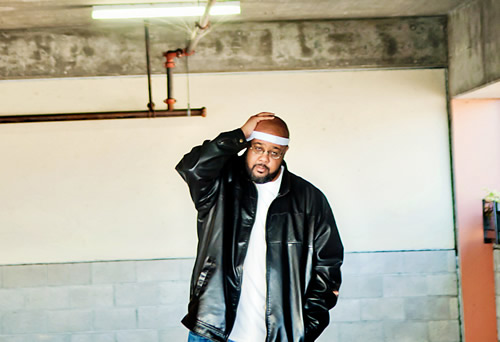 Gift of Gab doesn't really look like a paragon of healthful eating habits, for he is a large man. But the MC — considered one of the best in the game — likes to seriously balance out his barbecue and pizza with regular visits to the Bay Area vegetarian spots he swears by. In the following interview, the rapper talks favorite restaurants in Oakland, the spots he hits on the road, and his fond memories of growing up and eating well in Texas.

Also: his next solo album, The Next Logical Progression, will be released March 27th on Quannum Projects. You heard it here first.

Eat anywhere good recently?
I live in Oakland, and one of my favorite places to eat is Zachary's Pizza. It's the best pizza I've ever had in my life. Other states might get mad because I'm saying that, but it's true.

What do you get there?
It's like a pie. I usually get the vegetarian. It's seriously the best I've ever had.

Any other spots?
I love Everett and Jones — some of the best barbecue you can find. There I like to get the dark meat chicken, the thigh and the leg. Every now and then, I'll get the hot links. I love the mashed potatoes there. The greens, as well.

I'm the type of person that will eat a lot of meat and then try to be vegetarian for a while. So when I'm trying to eat healthy I'll hit up a place in Berkeley called The Herbivore.

What do you like there?
I get their seitan shawarma. It's a shawarma wrap with the fake meat. Sometimes I'll get their chili with cornbread.

I love chicken and waffles, so when I'm in L.A. I love going to Roscoe's. I love getting the dark meat chicken with the grits and the egg.

What about on the road?
There's this jerk chicken place in Toronto, I believe. It's called The Real Jerk. I'm big into that. I either get the jerk chicken or the aki fish.

I actually love the Carnegie Deli in New York because they have the biggest burgers and the biggest sandwiches I've ever had. I'm a big dude, so I like to eat.

There's a place called Hillside Quickie in Seattle. They're vegetarian and they serve this thing called the TLT with tofu in it. It tastes better than meat.

You eat at a lot of healthy spots, yet you say you're a big dude. Can you get full on that stuff?
With the vegetarian spots, it's all about what you get. It's evolved so much — especially in California — to the point where you can go get stuff and it can taste like meat or better than meat.

There's this place in Berkeley called the Saturn Café, and it's all vegetarian. I like to eat breakfast there a lot. I'll get an egg white omelette with avocado, potatoes, and a side order of fake bacon. The Fakin' Bacon is an acquired taste, but it is slamming. I also like to get the taquito plate with things like soy meat.

Do you cook at home?
Occasionally, man. I'm a big omelette person, so when I'm home I do wonders with them. I love vegetarian omelettes, I love omelettes with smoked salmon in them.

Do you care about the music they play in restaurants?
Damn. I never thought about that. But do I? Not really. I've never been in a restaurant and been like, "Please, turn this music off!" I don't know that I do. It's more about the food. I do notice when it's good.

Any last words?
I'm a pretty big dude, so I've been eating good my whole life.