Everyone Has Tried to Steal Noodlecat's Ceramic Cat

Share All sharing options for: Everyone Has Tried to Steal Noodlecat's Ceramic Cat 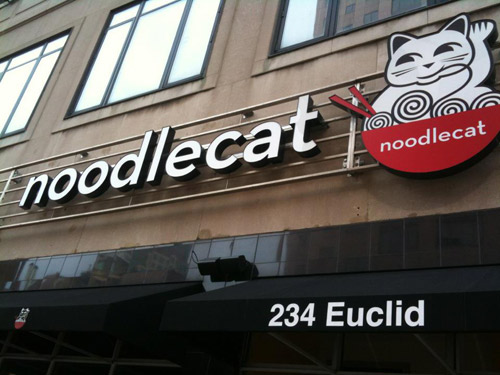 Cleveland's Greenhouse Tavern and its sister restaurant Noodlecat have been the victims of more than a few thefts over the years — most impressively, people have attempted to steal one ceramic cat at least three times a week. And these restaurateurs don't just let diners cart their precious goods out the door. They fight back. Whether it's loading a ceramic cat with pennies to catch a perp or a street-side tongue-lashing from 2010 Food & Wine Best New Chef Jonathon Sawyer, these guys are tough on crime. Greenhouse Tavern's Bridget Rehner explains: 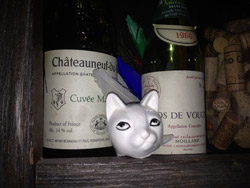 Besides the obvious (silverware, napkins, etc), we've had quite a few interesting attempts at stealing items from the The Greenhouse Tavern. A few in particular come to mind. When Jonathon Sawyer was getting ready to open our sister restaurant Noodlecat, we had a ceramic cat at the host stand that everyone tried to steal! Finally our GM put pennies in it, so when you picked it up the change would spill everywhere and the culprit was busted. This went on for a good few months (until our chef/partner Brian Goodman smashed it but that's another story) — at least three times a week someone tried to steal the cat!

Another time, a guest tried to steal an artichoke painting off the wall outside the bathrooms. Now, to get from the bathrooms to the front door, you have to walk past the kitchen, up the stairs and past the host stand. When he came up the stairs, chef/partner Jonathan Seeholzer was standing at the end of the bar. The guy was waiting outside and Seeholzer went up to him and asked what the painting was for. He told him he was stealing it for his girlfriend, and not to tell any one. Seeholzer then introduced himself as the owner and proceeded to kick him out in a not so friendly way.

Chef Sawyer's favorite story is the time a homeless man was walking by the patio at Noodlecat and tried to grab a set of chopsticks. Sawyer yelled at him, and he said he needed them to eat. He then grabbed a handful of them, walked 10 feet away and threw them all in a storm drain.

And, in the summer time we use baseballs to weigh down checks on the patio. Those tend to disappear pretty quickly.