Who the Hell Is Geoffrey Zakarian?

Share All sharing options for: Who the Hell Is Geoffrey Zakarian?

While New York chef Geoffrey Zakarian is already a household name for the 152 employees who sued him this year for $1 million in unpaid overtime wages, we're about to hear a lot more from he of the tortoiseshell spectacles. Last night on the Next Iron Chef, Zakarian, whose national television profile was first established when he became a regular judge on the Food Network's Chopped, cooked a holiday feast that beat out competitor Elizabeth Falkner.

But before you run out to get your imitation Zakarian glasses and make your friends play Chopped with you on the playground, know who you're emulating: a bankrupt Manhattan chef beloved by literally everyone who has ever worked or will ever work for the New York Times.

Later New York Times critic William Grimes would declare that with Zakarian at the helm, 44 was "always a lot better than it needed to be." Having been damned with faint praise by a critic from the Paper of Record, G-Zak had arrived.

Once you're rocking the Big Apple, there's nowhere to go but down south, so Zakarian packed up his French training in 1995 and opened the Blue Door at Miami's Delano Hotel, which was, according to Zakarian's website, a "symbol of South Beach's late 90's revitalization." With everything G-Zak touched turning to seafoam blue and pink gold, he became the executive chef at New York's Patroon, which earned three stars from Ruth Reichl at the New York Times.

On a roll, Zakarian then opened his first restaurant, TOWN, in New York, which conveyed its excellence to the world through unnecessary capitalization and another three-star review from Ruth Reichl. Figuring what the hell, why not open yet another restaurant that Ruth Reichl will like, Zakarian opened Country in 2005.

It would be his downfall. DUN DUN DAH!

The Fall of the Zakarian Empire

In 2006, Zakarian wrote a book called Geoffrey Zakarian's Town / Country (YSWHDT?) and yet another New York Times writer, Amanda Hesser, was enamored. She called the book "one of the best of 2006."

In 2009, when he wasn't busy starring as a chef judge on the Food Network's Chopped, G-Zak got a little ballsy, maybe some ballsier than he should have gotten, and opened The Lambs Club at the Chatwal Hotel in New York in 2009. (He ditched Country in 2008, and the restaurant died a slow death until finally shuffling off this mortal gas-powered stovetop in 2010.) Then he got even more ballsier, and opened The National at The Benjamin Hotel in 2010, which caused New York Times critic Sam Sifton to mess his drawers with glee, naming G-Zak's restaurant to his "Sifty 50" list of top restaurants. Undaunted by his ever-expanding ballsiness, Zakarian opened the Tudor House in Miami in 2011.

It was at this point that Geoffrey Zakarian realized that, despite having opened 1,389,190,127,201.000009 restaurants in the last six years, he had no money at all and needed to file bankruptcy. It just so happened that Zakarian discovered this at just about the same moment 179 creditors, including 152 former employees at Country, decided to sue him for $1 million in damages and $250,000 in penalties because they said he didn't pay them overtime and charged them for employee meals they never ate. Crazily enough, you can't sue a guy who's bankrupt, so good timing G-Zak! What a coincidence! 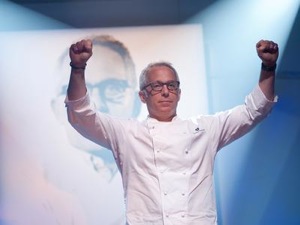 Of course, being bankrupt and declaring you've got less than $50,000 in assets should never stop you from shilling for The Luxury Collection, which is some kind of shit that Starwood Hotels is doing to promote the fanciest of their hotels, where fancy people like bankrupt Geoffrey Zakarian are wont to stay.

That brings us up to today, when Iron Chef Geoffrey Zakarian is "humbled" to be named the Next Iron Chef. May many endorsement deals follow so that poor, destitute Zakarian can lift himself up out of poverty and afford to eat at one of his 1,389,190,127,201.000009 restaurants. Whether or not he'll live up to his new nickname, "Darth Zakarian," remains to be seen.