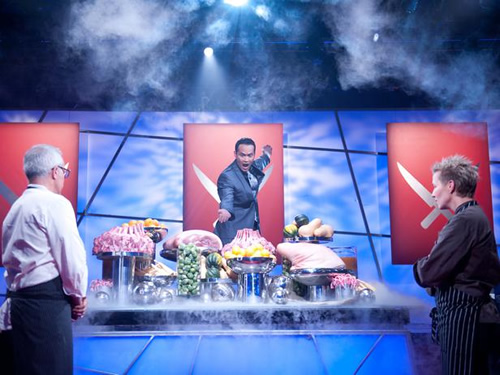 Last night, the World lost its foremost gourmand and connoisseur of all things Hennessy: Kim Jong Il. I mean damn son... at 69? You can’t leave, the game needs you! Who else is gonna have lobster and Henn rock airlifted to moving trains? 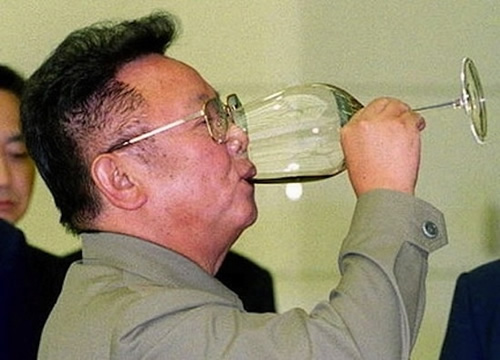 Where else are shawties gonna find dudes with platform shoes and vintage Courreges sunglasses? You my a a-like god! How you gonna leave me on this planet with all these peons drinkin Courvoisier? At least Kim’s fellow Ko-rean, Judy Joo was dressed for the occasion. Homegirl was lookin fresh with this one shoulder jump-off but that’s kinda all I remember from the first 45 minutes of the show. 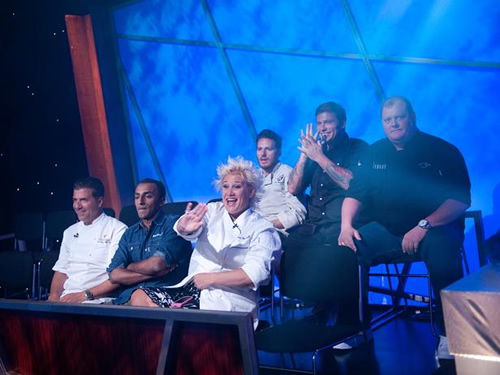 This challenge sucked. They came out with some holiday spread and all the chefs that got booted off the show were sitting in bleachers watching Falkner v. Zakarian. Falkner talked about being from California, Zakarian talked about luxury. What’s new? Falkner’s creative, Zakarian has technique, blah blah blah. The Chairman had surprises but they were corny and didn’t cause anything to explode or diarrhea so that wasn’t interesting at all. With about 35 minutes left, the Chairman told people to make shit with cranberries because that’s what Japanese people think Americans eat for Christmas. FYI, is the Chairman actually Japanese? He looks like Mattel’s portrayal of a Japanese Ken, but I’ve never actually seen a Japanese person that looks anything remotely like the Chairman. I’m guessing he’s one of Tom Cruise’s bastard children from The Last Samurai.

Speaking of Japanese people... why the fuck is my boy, Morimoto, a judge? I love this man. Genuinely, love this man, his food, I would hold his fucking sandals as he walked into the Rex Kwon Dojo if he asked me to, but he SHOULD NOT BE SPEAKING ENGLISH ON NATIONAL TELEVISION. This is basically what it sounds like hearing Morimoto speak Engrish:

For real, Fobrish can make anyone look retarded. It got so bad at one point... Morimoto tried to say “I feel his heart” talking about Zakarian’s cooking. Every one was kinda dumbed out not knowing what he was saying so Alton Brown felt it necessary to reiterate to the audience “he feels his heart every one, he feels his heart...” It was as if Morimoto was Chewbacca and Alton Brown was Han Solo.

I have no doubt that in his head Morimoto had straight heat rocks, but every time he opened his mouth all that came out was 3rd grade observations like “UGH, good!” or “Ugh, I rike!” Why can’t he just speak Japanese with subtitles like OG Iron Chef?

I was pulling for Zakarian all season, but at the very end I saw myself wanting Falkner to win. She had really interesting concepts, she has a wider range of skills, and I think it’d be dope to see a primarily pastry chef as an Iron Chef. 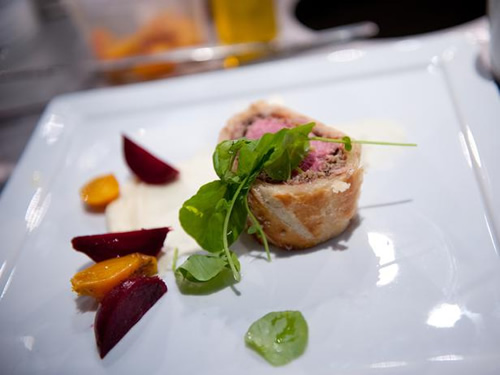 She also made the best “main” which was an ill Beef Wellington that I would stick somebody up for. 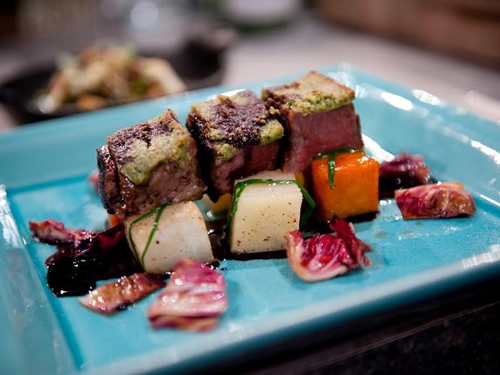 On the other side, Zakarian made these stupid looking present joints with tough looking beef on top. He also made a cheesy ass Mad Man cocktail. He’s still the best chef on the show, but culturally, Falkner is more interesting and relevant. In the end though, it was Zakarian winning it all and assuming the position. I wasn’t even high but I couldn’t help laughing my ass off seeing Zakarian standing on this platform with his arms up like he just saved the world or brought Kim Jong Il back to life. Son, look around, it’s cameras, fake audience, and cornball chefs in the bleacher seats. You just won the Emperor’s New Clothes b. Put some fucking pants on. 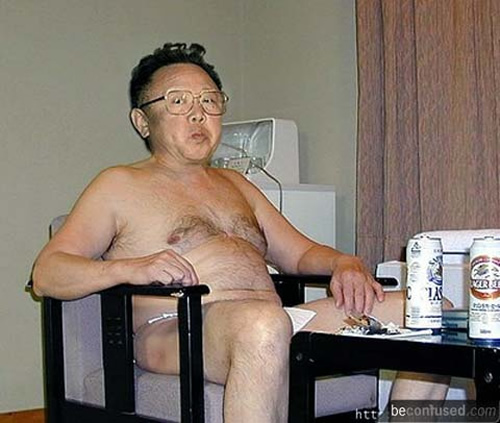