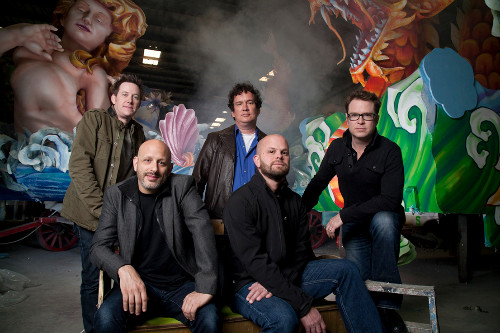 If New Orleans has a house band, it's Galactic. For the past eighteen years, the funk quintet has earned a reputation for putting on lively shows that generously showcase the band's chops and frequently incorporate local guests; it's a typical New Orleans party. They've also been known to take that spirit on the road, having earned fans around the country with a perennially heavy touring schedule.

In advance of the band's forthcoming album ("Carnivale Electros," due out 2/21), I got a chance to talk to saxophonist Ben Ellman about the band's eating habits. It turns out that these guys really care about this stuff: they're seasoned New Orleans eaters, and when they go on the road, they lurk message boards and meticulously plan their restaurant visits.

I'm a fan of the corner store, which is something that we have here in New Orleans. We have lots of neighborhood corner shops that do plate lunches. My corner store is the bomb. It's called Nick's and it's on the corner of Annunciation and Washington Avenue. It has the best soul food. A lot of residential neighborhoods will have a store that sells cigarettes and alcohol on the corner. Some of them do plate lunches, like mine.

What do you get at yours?
It's mostly fried stuff like po' boys, but my corner store does these soul food plate lunches. Every day of the week it's a different thing. Some days it's traditional, like red beans and rice on Monday. They do spaghetti, fried fish, stuffed peppers, chicken.

What I really like about this one is that their red beans and their white beans, the ratio of meat to beans is super heavy on the meat. They use lots of seasoning meat, not just like smoked sausage. They do pickled pork, pigtails, and neck. Lots of weird cuts of pickled meat to put on the beans.

I imagine it isn't very expensive.
It's like $3.50! I eat there all the fucking time.

Any other spots in town?
For seafood, I go to this place called the Crab Trap, just outside of New Orleans. It's one of the best places for seafood.

What do they do well?
They do lots of boiled seafood. One thing they do that is really special is the barbecue shrimp, which isn't really barbecued. It's boiled shrimp swimming in a pool of butter and pepper and Worcestershire sauce. You dunk your french bread in the sauce. It's the only place I've seen that does barbecue crab. They quarter the crabs and they do them in that style. It's really, really good.

When they do the crawfish there — I'm not exactly sure how they prepare it — but they purge them and clean them before they boil, which makes them peel easier and taste better.

Any other standouts?
There's a restaurant called Cochon — they have a butcher in the back.

Oh yes.
That's my in-the-city lunch spot. They do really good work there. I think they have one of the best muffalettas around. They make all of the meat that goes into it in-house. I buy my bacon there. They do a killer kurobota.

Can you name some of them?
There are different places for different things. One of the most popular ones for pho is Pho Tau Bay, and that's really good. But for Vietnamese crushed rice dishes, there's a place Tahn Dinh. They have one of my favorite Vietnamese dishes in New Orleans, which is a roasted quail that's really, really special.

You seem to really know your stuff. Does this happen just by living in kick-ass New Orleans or because you've gotten into it on your own?
No, no. As a band, we've entertained ourselves over the last eighteen years searching and trying to eat locally and regionally. We scour Chowhound and all the message boards. There are very few random hits when he go eat on the road. It's our passion.

Now that you've mentioned that, what are some favorites on the road?
There's a lot. It depends on the part of the country. We consider ourselves barbecue connoisseurs, so we know a lot about the regional types. Also, when we're in New York, we scour Chinatown.

Name any of them.
In New York, we do the soup dumpling. We actually did a tour where we went to five places back-to-back. The winner was Nice Green Bo, which is actually right across the street from Xi'an, which does the amazing tiny lamb sandwich. Then we go to Great N.Y. Noodletown, where we get the roasted duck and pork. We usually do the trifecta. If we have room, we go for the Chinatown ice cream after. If that stuff is all closed after a gig, we end up just at Noodletown. Eight out of ten gigs end up there, I'd say.

And for barbecue?
I'll just mention my all-time favorite barbecue, which is Archibald's, in Alabama. It's exactly what you want to see from a barbecue spot: a shack on top of a hill with nothing but a pit and a guy that keeps the fire going; benches outside to eat.

Last question: do you pay attention to the music played in restaurants, or do you not care?
Only if I am forced to, in which case I get really annoyed. Otherwise, the answer is "No." I'm too focused trying to order.