How Nine London Bankers Spent £71,000 at a Nightclub

Share All sharing options for: How Nine London Bankers Spent £71,000 at a Nightclub 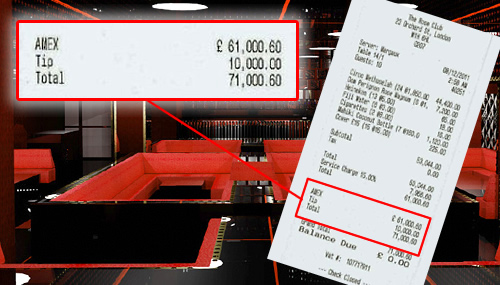 How does one even go about doing that? Well, you buy £7,200 worth of Dom Perignon (that's six magnums), and seven bottles of something called Mahiki Coconut that cost £160 each. There was a £7,956 service charge, and they tipped an extra £10,000 on top of that. Also, they ordered 24 bottles of what the Daily Mail calls "Prince Harry's favourite drink," Ciroc Ultra Premium vodka. What is Ciroc Ultra Premium vodka? Glad you asked.

Ciroc Ultra Premium vodka comes in six liter bottles that, at the Rose Club, cost £1,850. It is also served from a device called Le Halo, which is described as "a futuristic pouring unit." Here's hoping they shared; 24 six liter bottles of vodka goes a long way between nine people.

Anyway, the £71,000 bill is in addition to the money the hedge-funder just threw on the ground: "At one point he threw £50 notes in the air like confetti and watched as 'pretty girls' scrambled on the floor to pick up as many as they could." Real charmers, these guys.