Share All sharing options for: No Reservations' Holiday Episode: Just the One-Liners

The No Reservations holiday special aired last night, and what a strange journey it was. Tossed out of the house by his wife — boy can she yell — Anthony Bourdain wandered New York City looking for solace in the foods of some of New York's best chefs (April Bloomfield, Dave Arnold, Lydia Bastianich, and Kurt Gutenbrunner). And Norah Jones was there? And a Catalan pooping log? Travel Channel hostess/occasional Bourdain target Samantha Brown made a cameo as a crazy drunk cat lady. It's a Quotable Bourdain double feature today — feel free to add your picks in the comments. And Feliz Navidad, motherfuckers.

1) To an old coworker at Les Halles: "Feliz Navidad motherfucker."
2) On all the cooks in the dream-world Les Halles having received Beard Awards: "I was not appreciated in my time, perhaps, but it's good to know the guys who do the real work are finally bringing home the glory they deserve. Actually, that consoles me not at all."
3) On certain rags' in-depth Bourdain coverage: "Not wanting my marital discord, however temporary, to end up on the gossip pages."
4) On Vegan Black Metal Chef: "Mommy, make the scary vegans stop. Please? Mommy?" 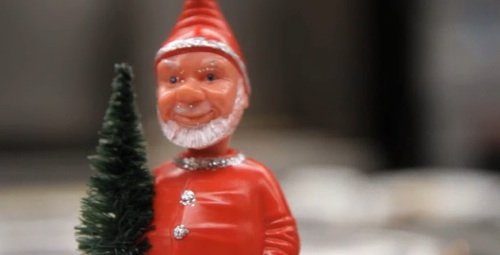 5) On the reason for the season: "You know, it's the holiday season, and I've been thinking about things. What would Jesus eat?"
6) Dave Arnold on the Bible not being a cookbook: "There are not actual recipes in the Bible itself."
7) On his shopping list: "The seven species, as listed in the book of Deuteronomy, are the starting point. Wheat, barley, dates, figs, pomegranate, olive oil, and wine. Sounds like my fridge."
8) On how he likes his pigeon: "I like it like Jesus liked it. I'll have what Jesus had."
9) On ancient etiquette: "I'm guessing you had your eating hand and you had your ass-wiping hand. He may have been Jesus but they had yet to invite the wet wipe."
10) On what constitutes comfort food: "Pale, beautiful hues of meat, meat and more meat."

*See below for the full cartoon of good ol' Tió de Nadal. 11) On the Catalonian tradition of Tió de Nadal: "A pooping log with a smiley face, it has it's own Christmas carol and a candy-based defecation ceremony."
12) On the Austrian tradition of Krampus: "The original bad, bad Santa. Because in Austria, when they tell you what happens to bad boys and girls, they ain't fucking kidding."
13) On the sun shining wherever Lydia Bastianich goes: "Next door, unlike my dark fetid chambers, everything is bright and filled with hope and sunshine." 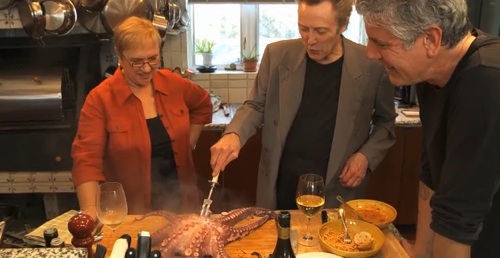 14) On hanging out with Christopher Walken and Lydia Bastianich: "Okay, that was my Christmas present to myself. I got to meet Christopher Walken."
15) On who doesn't like pie: "Communists. Terrorists. Enemies of American freedom."
16) On how you know when the duck is ready: "Our duck has been glazed and shellacked like a new fish at Rikers Island, caramelized like a budding reality star."

17) Samantha Brown on Bourdain: "Everyone kisses your ass like it's an amuse bouche."
18) The nurse at the hospital to Bourdain: "You should know I'm a big fan of Miss Paula Deen, and I did not appreciate some of the cracks you were make. You wish you had half her talent. Merry Christmas, asshole." 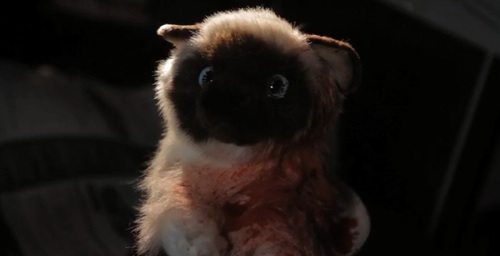