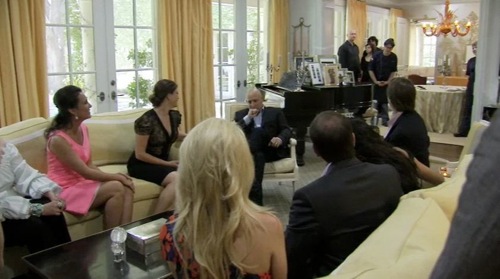 How was everyone's Thanksgiving? Bravo decided to air a new episode of Top Chef Texas on Thanksgiving Eve, which was surprising. But it made total sense once I saw that it was a perfectly-timed holiday special, wherein everyone made beef chili in the sweltering heat of a Texas rodeo. I'm sorry I didn't recap the episode. I meant to! I even watched it live with my DVR-less parents. My dad fell asleep in the first four minutes. I think, as always, he had the right idea.

A quick summary: people cooked with chili peppers. Then they served chili at a rodeo. Some of it wasn't good. Padma rode a horse and Chris C. got a giant boner. Beverly cried, because the horses made her miss her husband, I think. Richie, Chris J.'s little buddy, got sent home. He cried a tiny bit. Even Padma was sad. But then she wasn't because she's got emotional Memento.

The remaining contestants are told to get a good night's sleep because tomorrow they head to Dallas, even though they just got settled in their house. They all hate surprises so much. "I thought I'd live in this house forever. I thought one day my kids and their kids would die in this house. A parent should never have to bury his grandchild in his Top Chef house." Get over it, guys. This show never lets you get comfortable, because God forbid a well-rested chef prepares a normal meal. No one would want to watch that on television. Beverly is excited to travel to Dallas. "Isn't Dolly Parton from Dallas?" No, she's not. 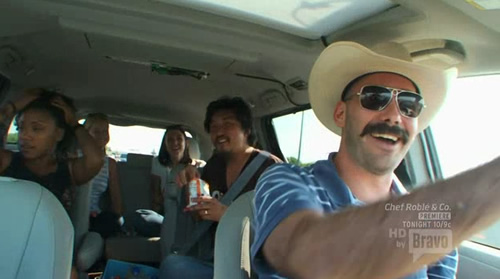 Road trip time! They are driving themselves to Dallas, in three sponsored vehicles. There is some bonding. Edward talks about leaving New York for love. "The moment I broke down and accepted her into my life was the happiest day of my life." True love! Love is all about buckling under pressure and abandoning your principles due to sheer exhaustion. Take notes, ladies. Keep hammering away at your man. It may not seem like you are doing much, but it's like The Shawshank Redemption. You make a little bit of progress each day, then you take a walk in the yard and shake the crumbs of your man's remaining dignity out the bottom of your pant leg.

Ed asks Ty-Lor if he thinks that he will get a float in the gay pride parade if he wins Top Chef. Ed understands gay people and parades as much as he understands marriage.

Perhaps most importantly, we learn that Chris Crary used to be fat. He lost 70 pounds over two years. He kind of has sad eyes. Chub chub chub. 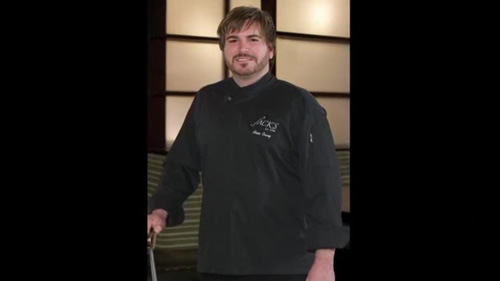 There is a state police road block in the middle of some corn fields, and everybody pretends like they are really in trouble even though there are cameras everywhere and the three Top Chef vehicles all arrive in a perfect row. Only Chris Crary doesn't realize it's part of the show and starts loading bullets into the gun he stowed away. "Guys, I'm wanted for multiple sexual assaults," says Crary. "I can't go to jail. I am going down in a hail of gunfire. Tell my family I don't regret anything I loved touching those ladies." Luckily he cools down in time. 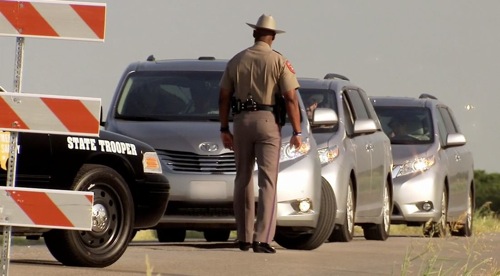 Padma and John Besh await in the corn fields. Crary comments on Besh's sparkling teeth. His boner doesn't even know where to point! "Sometimes I wish I had two boners." Padma says this Quickfire is all about resourcefulness, and the chefs have 30 minutes to cook a dish using only what they find in the survival kits in the trunks of their sponsored cars. What is a survival kit? Is that like a Go Bag? Crary opens his, takes two anti-radiation pills, shoots Padma with a flare gun, and carries her off into the woods. The state troopers quickly catch up with him and shoot him 28 times in the back. (That many shots means they reloaded multiple times.) 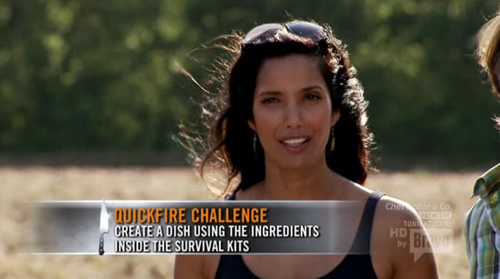 Five thousand dollars and immunity is on the line. The chefs open their survival kits and discover all kinds of processed, canned junk. Some of it, like the saltines and the canned green chiles, is reasonable; the canned chicken less so. I'm not entirely sure why canned chicken turns my stomach in a way that tuna doesn't, but boy does it. I guess because I imagine it is much crueler to can chickens. A farmer points a gun at the chicken cage and then at can. "Get in. No, leave your bones." Yuck.

Conditions are not fun. The food is unappetizing, the hot plates are unreliable, the wind is blowing like crazy, and the sun is intense. These guys have it worse than the dirt people from the Grapes of Wrath, who famously made the journey from Austin to Texas to compete in the first Dust Bowl. Ed's back, like his resistance to marriage, breaks down. Chris J. tries to forage some dry corn from the fields, because he is like one of the original pilgrims. (His hair looks like a pilgrim hat.)

Everyone's food looks disgusting. A lot of it tastes disgusting too. This is what John Besh's face looks like while eating most of it. 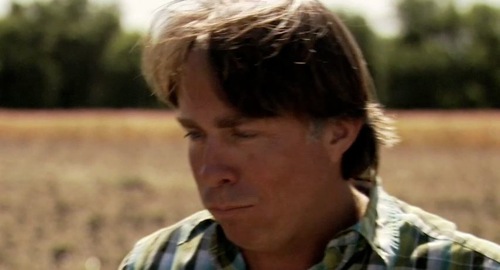 His least favorites are Whitney's canned chicken and green beans, Dakota's pineapple corn noodles, and Chris's raw tofu and crab meat rice slop. Does it sound like I am describing them extra bad to make them sound bad? Well I am not. That is what they all are. Chef Besh likes some stuff too, though! Ed made Thai peanut soup and a nori-wrapped crab cake, which is very impressive. Chuy named his dish "Chuy's Dirty Mouth Dirty Rice." Horrible. But he convinced Chef Besh that canned trout can be good. He did not convince me. But his favorite was Lindsay's Vienna sausage soup with Saltine tuna club sandwiches. What a natural combo! Yuck. Ed is disappointed, because Lindsay's dish didn't seem that great to him. The sandwich "looked as dry as the Texas land we are standing on." What a poet. I have goosebumps. 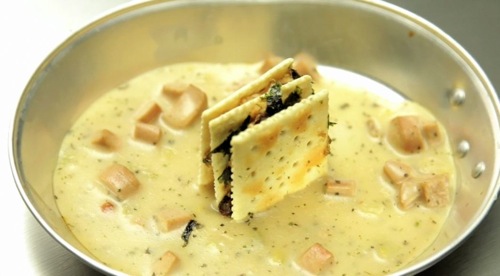 The theme of this week's Elimination Challenge is terrible, disgusting people. God. What a parade of rancid dogshit. The chefs will be cooking for a progressive dinner party in Highland Park, an extremely rich and equally tacky old money neighborhood in Dallas, Texas. It is called a progressive dinner party because you start at one couple's house for appetizers, move to another's for entrees, and finish at a third's for dessert. Your night gets progressively worse until you slam your eyeball down on one of the many pewter horse-shaped candlesticks and then fall dead onto a La-Z-Boy fainting couch. More like POOveau riche, am I right? I have no money and am desperate for it, but these people make me hate it. I guess their grandparents didn't find any taste in those oil wells, huh? They are pieces of work. Are these people what that other Bravo show is about, the art one? (I realize it's called Work of Art, but for a few minutes I thought it was called Piece of Work and that made me laugh a lot. I'm a little disappointed now it's not called that.) 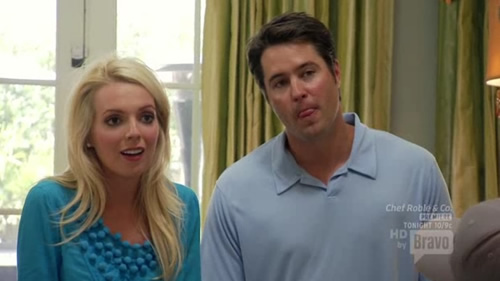 Each couple lays out their food preferences. Let me summarize. "I don't like spice, cilantro, colors besides pink, adventure, surprises, using my hands, messes, Catholics, new flavors, brown and/or disabled people, the middle class, gun control, bell peppers, or social responsibility. I love gummy bears, bananas, and beef." The Entree Husband (I refuse to learn their names) says his favorite type of beef is "filet." I bet it is. These people reek of ass.

Everybody cooks. Everybody serves food. The guests are dressed up. Gail and Padma remind everyone they have breasts, as if Chris C. forgot. One Dallas couple had 800 people at their wedding. Another had 1,200 people. Gail says, "You're joking, right?" No, Gail, they aren't joking. They ARE jokes. There is a difference. 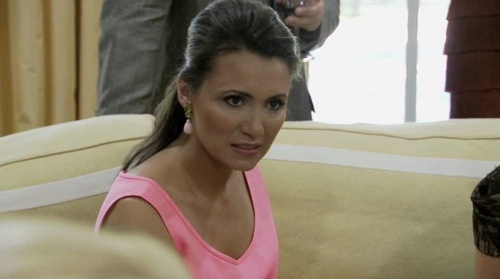 There are a lot of stupid comments by the Dallas couples, and the judges frequently have to bite their tongues or hide their eye-rolls. It is always funny on this show to see the civilians — invited to dine and talk try to elevate their commentary to the level that both belongs on television and can keep pace with judges — but never before have the judges and the diners been so out of sync. Let's just say everybody in Dallas has different palates than the judges.

Sarah's grilled artichokes, Grayson's spongecake sandwich, Dakota's bread pudding and milkshake, and Paul's brussels sprouts are on top. It's unclear whether the diners had much or any input, but Paul's was also a favorite of the Appetizer Wife, and it's the judges' favorite as well. He wins! He's excited. He's the only chef on the show that actually cooks in Texas and it means a lot to him to win. 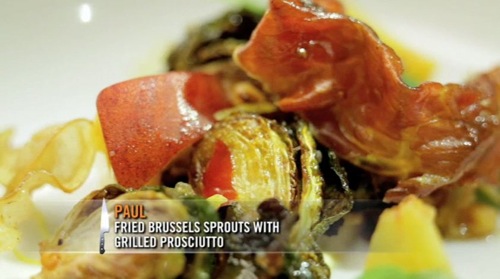 The bottom chefs this week are really on the bottom. As Tom says, "bad on top of bad on top of bad." It's the two Chrises, Ty, and Chuy. Ty-Lor made a slop of dry pork tenderloin. Chris Jones made a chicken cigar thing that seemed clever but grossed everyone out. Chris Crary's dessert was a disaster. It had bananas, strawberries, mint ice cream, a poorly made cupcake, bad Heath bars, and more. Tom says it looked like a three-year old had a cupcake bar at their birthday party and a little kid loaded up with all the fixings. What three-year old gets a cupcake bar? Chuy's salmon with goat cheese cream was overcooked and unappetizing. 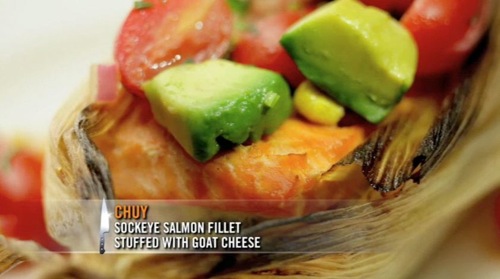 All these dishes seem very bad. But the judges are especially disappointed with how Chuy admits that to get the goat cheese melted enough, he needs to overcook the salmon, and that he does that in his restaurant. What? That makes no sense. Tom says he can fix the proportions if he wants it to work right. He'll have to do that back home in his restaurant. Padma tells Chuy to pack his knives and go. 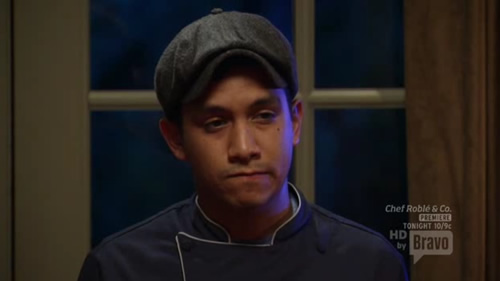 At the end of last night's episode, Highland Park was burnt down. No one came to any of the funerals. RIP Amen.