Share All sharing options for: The Next Iron Chef, Episode Two: Chiarello's Inferno 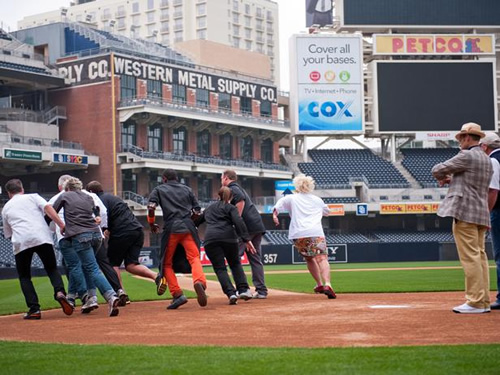 The chefs appear at Petco park, so, I figure they’re cooking Chinese food... 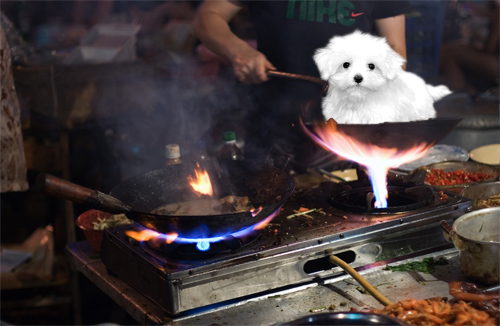 Instead, we are subjected to a lot of shitty sports jokes and Anne Burrell’s observation that Iron Chefs are like “chef athletes.” Anne, baby, I’m sorry, but I don’t think you fit the definition of “athlete” in any country, continent, planet, or urban dictionary. They say that there is a famous baseball player that will show them around and Randy Jones appears. Where the fuck is Tony Gwynn? Where is Trevor Hoffman? Can I get a hells bells?

Luckily, Zakarian is on this show. That’s my mother fucking dude. I’ve been watching way too much summer camp reality television because of recaps lately and Zakarian is my favorite on any show by far. Every one else is on some Camp Anawana shit, but Zakarian openly tells you it’s wack, he doesn’t like the activities, and he’s probably telling all the kids to get trippy on Robitussin. He refuses to make things that are below him like hot dogs, hamburgers, or Happy Family Maltese. Which reminds me of the quote of the trip in Portland courtesy of Demetria: “I want to know who actually orders the fucking Happy Family?” 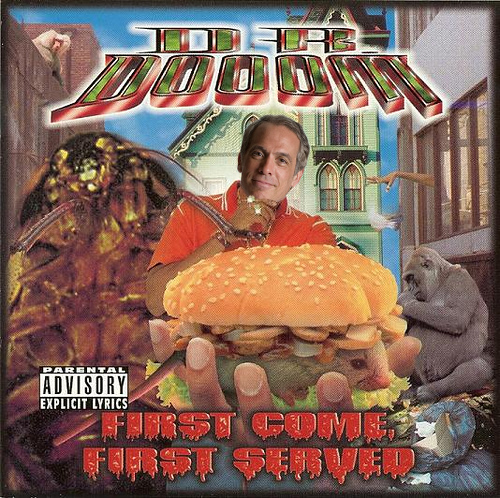 I fux with Hughes too. Every one is trying to pick ingredients but Hughes doesn’t even think. He just starts grabbin’ shit like the Lo-Lifes. LEMME HOLD SUMTHIN! 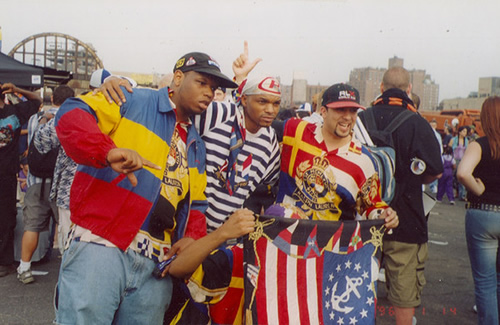 I like this new Tyler Florence a lot better, but I think they should have Hughes visit MILFs in kitchens like Tyler did so he can be a homewrecker. “Hey Chuck, how do I make poutine?” Like this boo: you be the fries, I be the gravy, how u luv dat? 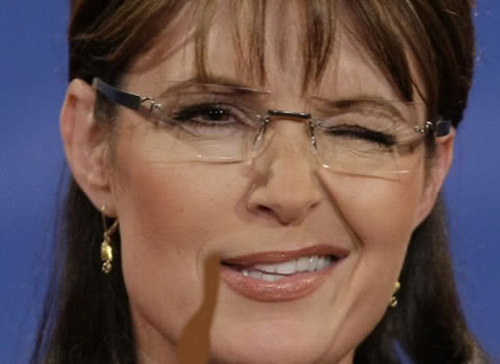 On the other hand, McMillan is a cheese dick. Dude is nice enough but he’s full of shitty idioms from the 80s such as these hits: “Hook a brother up.” or “If you can’t take the heat, get the hell out of the kitchen.” He’s clearly been spending too much time entertaining 12 year olds at his side job as Shamu. Chiarello is an interesting dude though. He is one of the only people offering insight besides “Oh my God, being an Iron Chef is SOOO CRAZY!!!! It gets crazier every week! WAIT TILL NEXT WEEK WHEN ALTON BROWN jumps out of an airplane with his douche bag still attached!!! OHHHHHHHH I CAN’T WAIT! It would be SOOO COOL IF WE HAD TO SOUS-VIDE WITH USED DOUCHE BAGS!!! AAAAAAAHHHHHHH I LOVE YOU FOOD NETWORK. YOU ARE MY SUNSHINE BITCH!” Honestly, that’s pretty much what they’re all saying.

Chiarello captures the spirit of ballpark food and the idea that they are representations of the region. Ballparks, when done well, aggregate food representative of the region. It’s executed well maybe 30% of the time, but when right, it was pretty fucking dope getting a foot long dog with sauerkraut at old Three Rivers Stadium, a Shake Shack Burger at Citi Field, or just bad food at events in Orlando. I mean, that’s kind of our regional style: ass bag. We take anything and make it shittier. Oh, Penny Hardaway? We’ll fuck you up real quick. Nick Anderson? We’ll get you to miss four free throws. Wolfgang Puck? Yes, we can ACTUALLY make your food taste worse in Orlando. 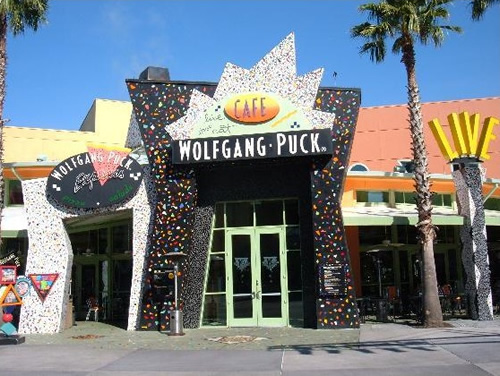 That is a restaurant that is actually in operation today. You can go there RIGHT NOW and eat shit if you wanted to. I know, I know, it’s crazy, but possible. Get on Jet Blue right now and wear a helmet. Then there was more Anne Burrell... “I’m going to do authentic ballpark.” Anne, you wouldn’t know authentic if I tattooed a certificate on your face. Anne, please refer to “Cot Damn” starting at 3:54, thanks.

Guarnaschelli made a hot dog-sausage sandwich that sounded horrible at first, but when plated looked really dope. There was nothing we hadn’t seen, but it was well made, looked delicious, and she won. 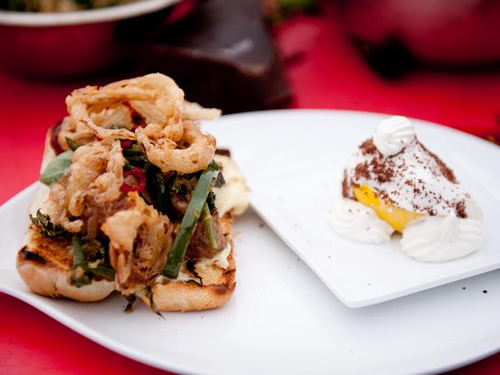 Coming into the show, I thought Guarnaschelli was really gonna suck, but she’s not bad. She’s not likeable on Chopped, her Alex’s Day-Off thing is for soccer moms, but whatever, she’s pretty sharp and if she keeps the Food Network love to a minimum, she’s one of the better and more watchable contestants. I understand not every one likes to kick in doors, set things on fire, and piss in elevators, so, there’s a place for someone like Alex who is smart, makes good food and appeals to stay-at-home white women. If we have to have a new Martha Stewart, I buy Alex. At least you know she’s not baking a Kwanzaa cake. But is she a freak like Rachael Ray? Oh, wha chu don’t know?

Alex’s shit was dope, I liked Zakarian’s, and Chiarello’s was interesting too. But, every other chef did some form of deconstructed ballpark food. It’s disappointing that you have all these “super chefs” and a 1/3 of them do deconstructed dishes that Wiley Dufresne probably made in 3rd grade with government lunch materials. Falkner did a deconstructed cheesesteak but had enough self-awareness to realize it was a shitty concept and called it “remodeled”, that’s all that Socrates and I ask for: “Know thyself.” Chiarello made a Tilapia polpette and shrimp cioppino, in plain English: Expensive Fish Cake. It looked dope, but his sausage? It looked good at first glance, but it was bricks of sausage with peppers and a raw egg on top. I don’t see a way it was going to come together.

Chiarello is just that dude. Some things you’re going to love, some things are contrived, but there’s always a thought process. If I had the money to eat his food all the time, I would just to see what new ideas he had; he takes chances for our enjoyment. Irvine made a horrible deconstructed hamburger made of ground hot dog and ground beef, what made it worse is the presentation. It looked like a two-pack from White Castle with cafeteria sides. 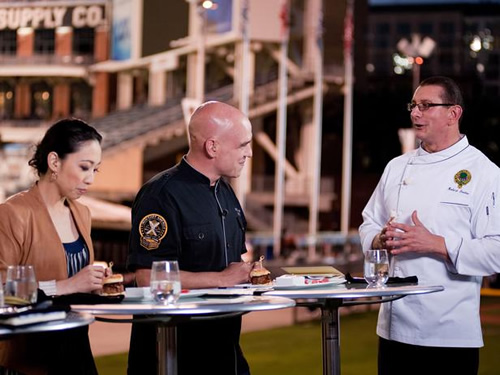 But, Symon was unfair to Irvine. I love Symon and he’s dope on most shows not named The Chew, but he says to Irvine “As an Englishman, you could have made this great little fish and chips.” Dude, if you told me “As a Chinaman, you should have made chop suey.” The ... wait, we have no representation, absolutely nothing would happen to you... You and Rosie O’Donnell can call us anything you want as long as Miss Info doesn’t hear it, proceed Mr. Symon. 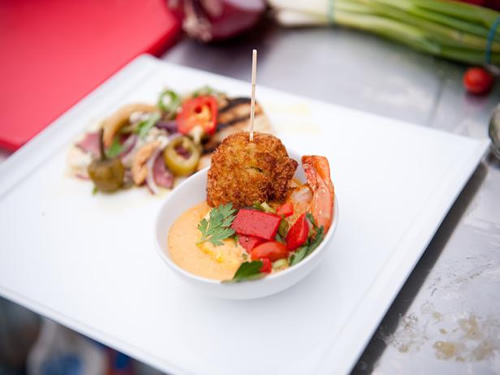 Then MacMillan made a deconstructed cheese steak that took the form of carpaccio, blue cheese, fried onions, and sweet peppers. It was bush league, messy, and not well-thought out. MacMillan’s problem is that he’s probably the “man” in Phoenix where every one is either eating at buffalo wild wings or gnawing on fake titties and collagen. He needs to get him some cable internet and read Eater so he realizes the rest of the world is off that and onto hood lobster. 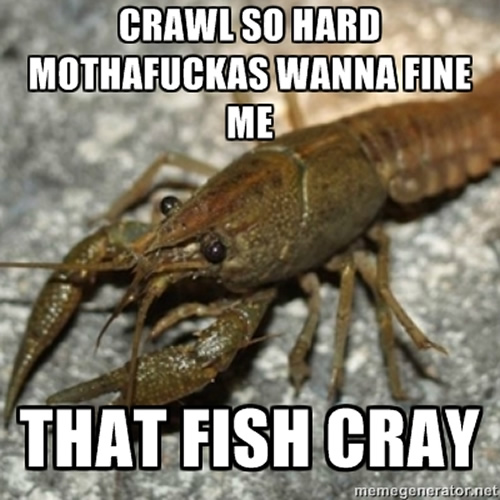 Then there was Hughes who made a really dope Tilapia corn dog. I always liked fish n chips, tempura, but the flavor of corn probably lends a lot and along with spicy dill sour cream, I wanted to eat that and watch the game. It’s no Coney Combo, the greatest arena food of all time, but I would fux with it. MSG BRING BACK THE CONEY COMBO! We don’t even have basketball just sell tickets to eat the Coney Combo. 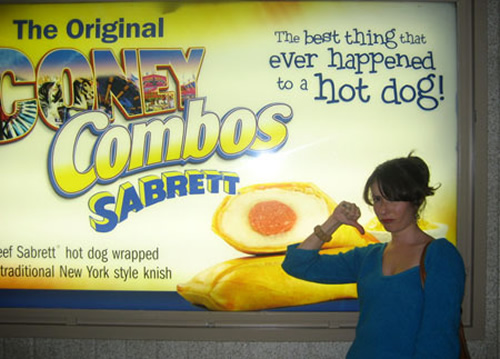 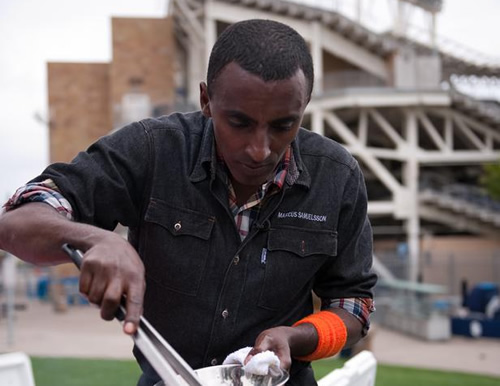 Hey Judges, I can’t tell which one is a better idea and in case one sucks, I’m gonna send three. Cool? Then any time someone has something to say, Marcus goes to the line his PR people told him to use: “I cooked my heart out.” Marcus, you’ve been in America a long-ass time, let’s call Berlitz and get you some new canned phrases and Canadian tuxedos. 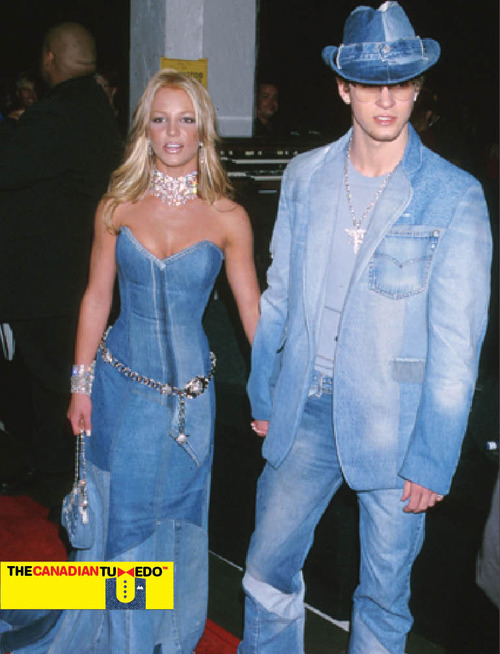 Then there was Burrell... “I’m not a huge sporting person but I’m about the food and the beer and the crowd so I’m always looking for something lighter.” For real? She made a PF Chang’s Lettuce wrap with beef curtains for dish one. Then, a chicken and kielbasa sloppy joe that looked like it came out of a can. Disaster, but to her credit, she stayed true to her style as a hot fucking mess. She is a combination of every thing that sucks about TV chefs: Crocs, shitty hair, Wolfgang Puck presentation, and the idea that they are actually stars. If 21 year-old girls and guys are not trying to give you HPV, you are not a star. I believe that is the definition. I mean, Tony is a bonafide star, he can do THIS and still skeet some PYT and get a new batch of HPV at FIT right now. That is the definition of a star. But yo Tone, can we get a “No Homo”? That sous-chef is blowin’ you up kid! 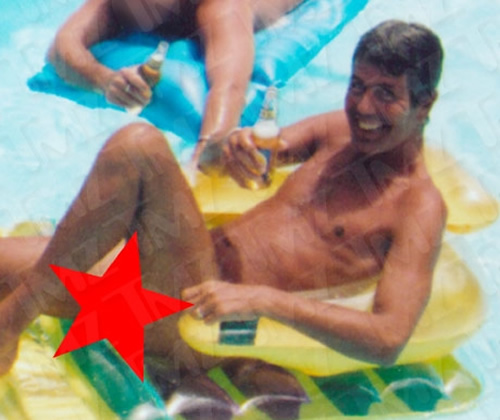 At the Judges' table, they beat up Zakarian and he’s bottom three even though Symon at one point said his offering was the best thing he ate on the competition. Zakarian doesn’t give a fuck and my man crush on homie (pause) continues. Chiarello also gets robbed because the judges pick on his egg. Clearly, they just want to bring some excitement to the competition. Burrell v. Irvine is a bum fight people can watch on Worst Cooks, so, it’s Irvine v. Chiarello. 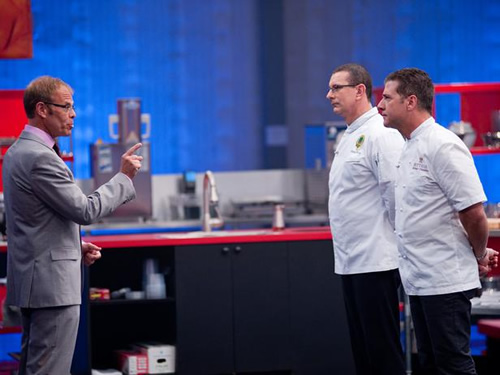 It was like watching Sonny Corleone beat on Carlo Rizzi. He was the original Ninja Turtle. RIP Sonny, I know you in the sky eatin’ pizza, wompin’ mother fuckers with trash can lids and shit g. You be my inspirations every day god.