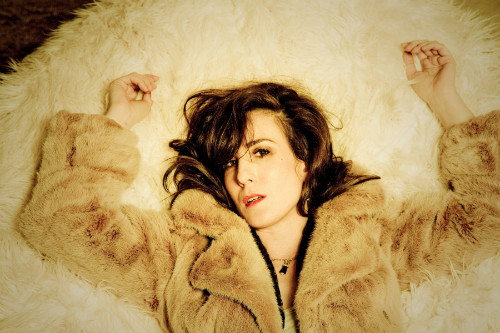 The synthy electronic pop outfit Class Actress have followed up their well-received debut EP Journal of Ardency with Rapprocher (that's French for "to get closer to"), a record that Paste summed up as "tight and full of melodramatic pop tunes dripping in '80s loving." Earlier today, from all the way in Glasgow, frontlady Elizabeth Harper got on the phone to talk about her eating habits, which range from lobster dinners in Paris to hippie-dippie meals at her parents' California home.

You're in Scotland. How's the food?
There's a strike going on in England — Glasgow especially — and we just took the train up from London. It's crazy. No cabs, and then a rainstorm. So we haven't had much to eat besides what's in the hotel. Scotland is not going to be the most interesting part of the interview. But I was just in Paris, so I have lots to say about that.

Where did you go?
Oh my god. What did I not eat? We went to Le Chateaubriand, but the line was insane and we didn't manage to get in.

Damn.
Yeah, so instead we went to Le Floréal to have lobster. Another night I went to a friend's house and cooked dinner — beef bourguignon, of course. It's the little things that matter in Paris. We also went to a place called Juliet, where I had oysters and white wine with a friend of mine from Brittany. He would feed me the oyster on a little piece of toast, with fresh butter, and then have me sip the wine. This little combination was so perfect. We had like four bottles of wine at the table.

What are those "little things"?
Ordering coffee and knowing that it's going to come to your room in a small bowl. The sugar cubes are going to be real clumps of sugar and not just those mechanical, square-cut ones. I'm obsessed with the city. There's nothing like a good croissant. In London we went to the Belvedere on Thanksgiving.

How was that?
Here's the thing: ambiance is really important. Not as important as food, but still, important. It's in Holland Park, in an old mansion that has been made into a restaurant. I had venison with a cherry sauce and a sweet potato. It was so nice. We were the last table of the night. My friend played the piano, and I was like, "Where am I?" That was surprisingly great, since we couldn't make it out to St. John or any of those places because I was busy. A good discovery. I kind of want to talk about the food I ate back when I lived in California.

What did you eat growing up?
I grew up in Southern California, and my parents literally grow at least half of their own food. At least. They have like fifty-five fruit trees, tons of vegetables — a guava tree! The most amazing stuff. Plums, peaches, nectarines, and apricots.

What are some dishes you and your family used to make?
Name something and we made it. My parents are constantly growing, picking, canning, drying, and eating. I'll go visit them and come back to New York with a bunch of sun-dried tomatoes that my dad prepared. I also often sneak over a bunch of guava. One dish I remember: I had a marinated grilled chicken breast — marinated with lavender and orange zest — and I baked it with fresh apricots and honey and had it on a bed of spinach. Everything was from the yard except the chicken. But we did have chickens when I was growing up.

Nowadays I just go there and graze from tree to tree or pick the peppermint for my coffee. The way we eat in California is hilarious. A little much, not gonna lie.

What about favorite spots in New York, where you are now based?
I live in Greenpoint, so there are the staple restaurants that we love to go to, like Diner and Five Leaves, which I go to like three times a week. Then Marlow & Sons is my favorite. I also love La Superior, which reminds me about my recent trip to Mexico City.

How was that?
Oh my god, amazing. The tacos just in my hotel restaurant were amazing. It's so sad, since I didn't get to eat any other street food. Just the hotel.

That stinks. Let's go back to Brooklyn, then. What do you like to eat at Five Leaves?
Yeah, at Five Leaves I have the kale salad. It's a huge mound of it, and you can share it with a friend. They also have a great drink with absinthe and some pink stuff. Nights & Weekends just opened across the street from there, and I'm not the biggest fan.

Do you ever venture into Manhattan?
You know, La Esquina just opened up over here in Brooklyn, and it's great. I've been there a couple of times. Now that there's La Esquina in Brooklyn... I'm trying to think, "What do I need from Manhattan?"

I won't push you further on that. How about music in restaurants? Do you care about what's playing?
No techno! I just came from a lounge that had the game on...and techno. Let's go back to Five Leaves for this. They actually play vinyl there! Can't beat that.