Share All sharing options for: Foster The People on Memorable Meals, Gawking Fans 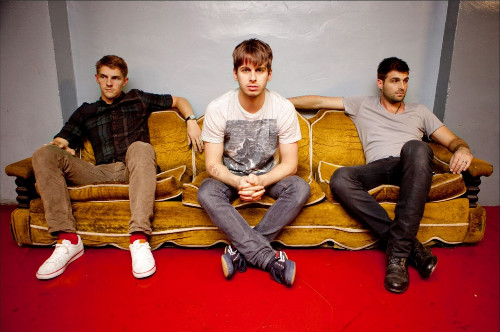 There are few bands out there today that make the case for the traditional music business model as well as Foster The People, the very L.A. indie pop band that doesn't stop picking up steam. Their success is even more shocking when you consider that these three guys — Mark Foster, Mark Pontius, Cubbie Fink — have managed to produce hit after hit from their debut "Torches" by doing it all the old-fashioned way: writing songs, playing instruments, and touring all over the place.

A few weeks ago, Pontius, their drummer, got on the phone to talk about his and the band's eating habits, which range from high-end spots chosen by their manager to frequent pit stops at Chick-fil-A.

What's the last good meal you had, then?
Well, our tour manager is a really big food guy, a connoisseur, and every city we go to he shows us a cool place.

What are some of them?
In Boston, we had oysters at Eastern Standard. It was seriously the best seafood I've ever had in my life. My first time having oysters, and I'm definitely in love with them.

Any others come to mind?
We try not to do fast food, but Cubbie and I are big Chick-fil-A fans, so we stop there whenever we pass it. We make sure to stop. I love it. We also ate at a great steakhouse in Indianapolis, St. Elmos'.

What about in L.A., where you're based?
I'm big into burgers, and there's a place I've been going to for years called Molly's Burger. It's a shack on the side of the street. I'm not crazy about complicated burgers, I just like a nice patty, lettuce, cheese, mustard, mayo, ketchup. Umami's really good, too, so I like that.

What do you get there?
To be honest, every time I go I get something different because I want to try something else. I like to change it up.

Do you ever cook for yourself?
I do, actually. I haven't been home for a while, but I love barbecuing and cooking vegetables and brussels sprouts on the grill.

What about bars?
Three Of Clubs is a good one, in Hollywood.

What do you like about it?
It's just a really dark bar where you can't really be seen. It's nice to go there and interact with friends. The jukebox there is amazing! Lots of classic songs, and 80s music. It's kind of Old L.A..

Do you care about the music playing in the restaurant when you go out to eat?
I totally care. That's maybe something some people overlook, but for me, it's important. That's key for the atmosphere. I want to be in a good mood — it even has an effect on how the food tastes, probably.

Do any places come to mind? What kind of stuff do you like to hear?
No particular places stick out, but I like hip, new music. Things that are exciting. Not your normal pop radio station stuff. I mean, it also depends on the setting. If you're in a steakhouse, nicely chosen jazz or 50s horn music is great. But if you go to a burger spot and there's a cool hipster band on, that works.

You guys are blowing up. Do people stop you when you go out to eat or drink?
It's starting to happen, where people will come up and say something. Or they'll look at us weird, which is always more awkward. We were just eating in San Francisco and we got stopped several times at the restaurant. People are very nice about it, though.

Video: "Call It What You Want"