The Next Iron Chef, Episode 5: The Art of Storytelling

Share All sharing options for: The Next Iron Chef, Episode 5: The Art of Storytelling 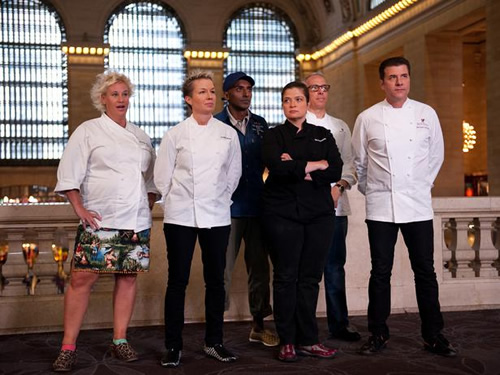 I missed out on them turkeys but this week’s Iron Chef was about storytelling. I would like to tell you a story about how Bloomberg ended the NBA lockout. Bloomberg took Stern to Kutsher’s for Thanksgiving and was like...
“David, have you been to the Catskills?”
“Does the sun rise in the east? Does Woody Allen jack off in a tube sock watching Mulan? Of course I’ve been to the Catskills!”
“David, we need to settle this lockout, imagine what will happen if NBA players join Occupy Wall St? Or worse, Occupy Madison Square Garden and the Arthur Treacher’s Across the Street.”
“Why would anyone occupy Arthur Treacher’s?”
“Because most people don’t eat halibut gefilte fish, asshole! They want their fish fried with mother fucking hot sauce bitch!”
“Who are these people? Are you saying the 99% eats fried whiting?”
“Yes, the 99% eats fried whiting, KFC Cheesy Bacon Bowls, and Egg Drop Soup you dick.”
“But why should I cave? Dwayne Wade is my child, I say whatever I want to that Starr Jones loving fool!”
“David, do you know how many times Eddy Curry is going to get robbed if there is no NBA season? I saw Billy Walker staked outside his crib with knee pads and an AR-15! Do you know how much dog food Lamar has to buy to keep Khloe running? I saw Danillo Gallinari making fresh mozz at Parm! Jeremy Lin just ironed my fucking shirt! I saw DeMarcus Cousins sitting on Paul Westphal’s face drinking Coconut Ciroc, listening to Coke Boyz 2, eating a fried whiting sandwich. Delonte West is robbing Walgreens’ for Valtrex! I mean, this is what Anthony Johnson is doing RIGHT NOW:

That’s pretty much how Bloomberg saved the NBA and prevented a nuclear winter. Unfortunately, the Next Iron Chef was not that exciting. This was the New York episode so Alton Brown had cards with NY landmarks on them that the chefs would have to tell a story about through food. They weren’t even dope landmarks, it was happy meal shit like: The Statue of Liberty, The Empire State Building, and the Dash boutique. They should have given people real NY attractions: David Chang’s East Village Detention Camp for People on Garde Manger, West Garden Spa, Ashley Dupre’s Apartment, and Lefrak City. For real, imagine Chiarello making a meal inspired by Lefrak City.

“Yes, I went to Lefrak and I wanted to merge it with my Italian heritage so I made Gnocchi out of bullets in Kenny Smith’s old apartment garnished with nubuck shavings and baking soda.”

After getting behind Team Guarnaschelli for three weeks, I’m off that shit. All of a sudden, she was back to her passive aggressive, dramatic self, talking about how bad she wanted to be an Iron Chef. She kept doing that crazy eye thing too. Has anyone noticed how Guarnaschelli ice grills every one and looks at them mad sideways like someone smudged her Prada sneakers? Yes, she wore THESE shoes with her shitty chef pants, buy some Air Force 1s trick, you work in a kitchen! 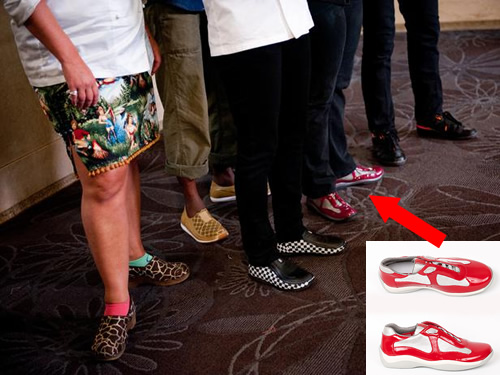 She has that calm before the storm front, over smiles, talks slow like ice cube, enunciates the shit out of words, and you swear she is eating children and puppies at night. She got matched up with the Empire State building so she made this aroma bag of burnt peanuts and pretzels. Conceptually, it may be witty but no one likes a woman with too much perfumes on. “Stop it with that cheap-ass Clinique and burnt peanuts boo, it clashes with this Gold Bond I got on. Can I live?” 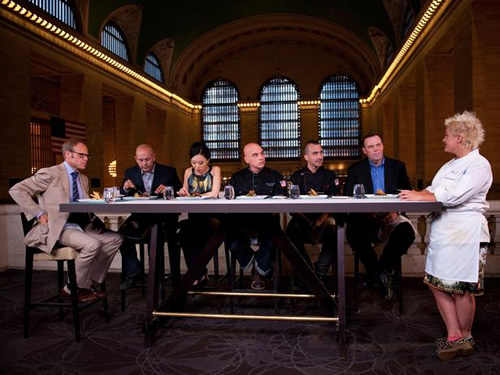 I thought that these chefs would come correct this challenge since it was mad open-ended and easy, but they really didn’t. Burrell won with a chicken fried chicken liver and grilled cornish game hen that was Marlow & Sons-esque, but it wasn’t anything spectacular. The funny part is Burrell says “With this hair you may think I’m a big city girl...” Yes, Anne, I see tons of people walking around the city with a head of hair drenched in LA Looks and the color of dog piss. Chiarello picked the Statue of Liberty and he got real deep on us taking it back to 1753 saying shit about how there were wild English Rabbits around the Statue of Liberty. Who the fuck cares, b? After the nerd out, he made a rabbit porchetta with cherry agrodolce. It’s the 5th or 6th time I’ve seen agrodolce on the show this season and I’m convinced it’s just duck sauce for Italian people. Someone please confirm this conspiracy.

Marcus got a prompt to talk about Broadway, but then he cured salmon and talked about being Swedish-African again cause clearly, that’s why Sally Struthers watches the show. Once again, he threw two dishes on one plate that had nothing to do with each other: Swedish hot smoked salmon and crunchy steak salad with bok choy. Finally one judge, Charlie Palmer called him out: “I think it was a convoluted story to begin with and I don’t think he was clear where he was going with it.” Marcus also tried to talk about the “working man” while wearing two-collared shirts. 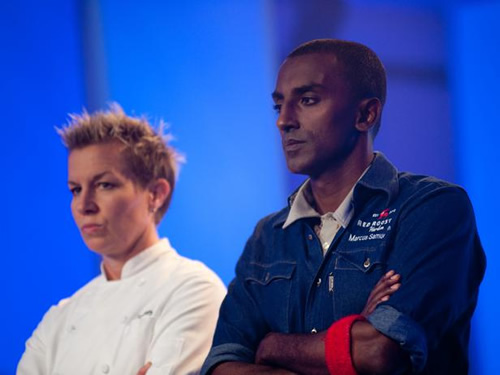 Marcus says: “The steak salad is exactly how I envision the working man coming up. He can’t afford the big steak, but he’s going to have a little bit of steak.” Dip shit, the working man has a Pathmark card and waits 30 minutes in the boiled snow crab line, then gives up and buys the family pack of top sirloin.

Falkner got the Brooklyn Bridge and told this shitty story about how the architect was German-Austrian so she made schnitzel. IT’S BROOKLYN BITCH, you should have made T-Bone Steak, Cheese Eggs, and Welsch’s Grape.

She ends up bottom two with Marcus so they battle using bagels and it’s the best Chairman’s Battle of the season. Even Marcus did some ill shit. He took bagels, fried them till soft, then rolled it with flour and made bagel dumplings. It’s definitely something I’d eat if Pathmark ran out of Pizza Bagels. Then, Marcus pickled fish again... 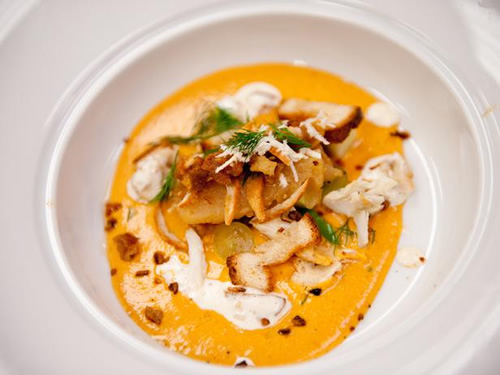 Falkner made ice cream out of cream cheese and toasted bagels served over smoked salmon and a grilled eggplant-black olive-bagel puree with bagel bread crumbs. It looked really dope, but Marcus made a good point. Falkner used smoked salmon out of a bag while he pickled a trout himself. It was a fair objection and I’m surprised the judges didn’t say something. 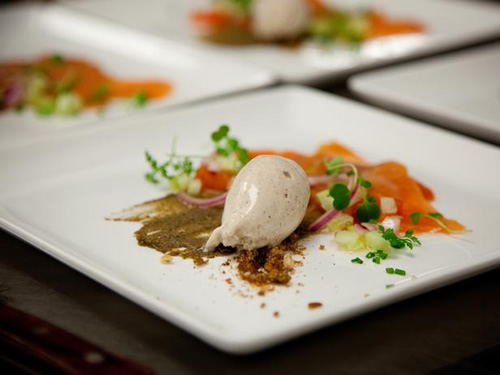 But, Falkner’s dish looked good, balanced, and complex without being convoluted. Samuelsson has Chuck Hughes disease. He can’t edit his dishes and crowds the plate with flavors. Falkner wins, Samuelsson goes home and I hope we never have to see him on a food show again. Best part, after Samuelsson loses, he pulls a Coach Harbaugh, doesn’t address the judges and just walks off like an asshole. I heard he is currently working on an airline called Swafrica that only flies between Stockholm and Timbuktu. 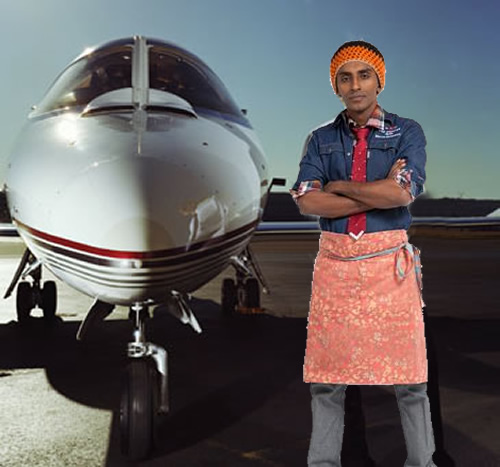