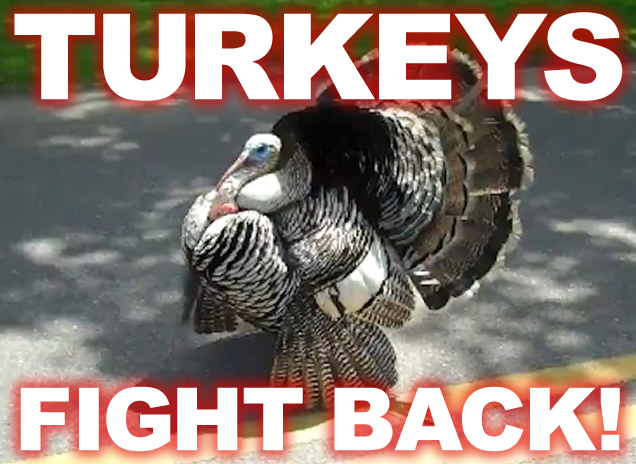 Turkeys: traditional holiday roast, mean-ass motherfuckers. Turkey attacks are apparently quite common: wild turkey populations are on the rise, with around 3 million of them in the US. According to experts, birds that "get accustomed to suburban life apparently start to see people as other turkeys" and naturally defend their turf.

Should you have the misfortune to happen upon a vicious turkey, here are some tips gleaned from the videos below: sticks are a good defense. Mailmen are not, as turkeys are known to "have something against the US Postal Service." Hide in your car. Do not taunt them. Try to appear less like a rival turkey. If you're dealing with a group of turkeys — called a rafter, a gang, or, less formally, a gobble — well, good luck.

Last year was all about the best deep-fried turkey disaster videos, but here now, the thirteen best turkey attacks videos around. Ordered by the level of terror — from a little scary to absolutely terrifying.

12: Man Taunts Turkey With His Porsche

10: Attack of the Wild Turkeys

9: Get the Fuck Out of Here

7: Reporter Kicked by a Turkey "Right Where It Counts"

5: That Is One Big Turkey, And He Wants In

2: Turkeys Have Something Against the US Postal Service

1: Reporter Hides From Turkey In Her Car