Share All sharing options for: Nathan Myhrvold on His Massive Cookbook Collection

Welcome to the Cookbook Shelf, in which Eater talks to all manner of food professionals about their book collections. Warning: serious book nerdery ahead. 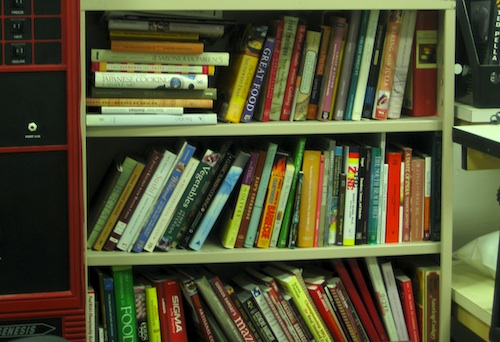 Some of the cookbooks at Myhrvold's Cooking Lab in Bellingham, Washington. [Photo: Paula Forbes / Eater]

Nathan Myhrvold's Modernist Cuisine is one of the most in-depth, heavy, and expensive looks at the current state of cuisine. Instead of talking about his own book, below, he talks about other people's books: the history of ethnic cookbooks in America, the problem with barbecue books, and the chefs he wishes would just write something already. (David Kinch, Wylie Dufresne, Homaru Cantu — looking at you.)

Do you consider yourself a collector?
Based on the number of cookbooks I own, I think you'd have to say yes. I have thousands of cookbooks.

Any in particular that you refer to more than the others?
Well, these days I refer a lot to my own. But you refer to cookbooks for different purposes. You know, one of the really influential cookbooks for me early on was Escoffier. I went through it cover to cover, read every recipe, made some of them, I won't say I made them all. But it's not a great book for most cooking. It's hugely influential to me and important to me, but I don't use it that much.

Usually if I'm referring to a book I'm trying to look something up, a kind of food I'm not familiar with or see what the standard recipe for X is. The Cook's Illustrated books are great for those, so I love those as a reference. There are some books analogous to that for other cuisines. So I have some Chinese books, some Indian books, some Italian. The Silver Spoon. Those are useful for seeing a broad take on a cuisine. So the Cook's Illustrated book have their take on the best way of doing hundreds and hundreds of common dishes. You don't look there to see an uncommon dish. That's not what they're about.

What qualities do you find particularly good or useful in a cookbook?
Details of the technique or how to actually do it. I particularly like when they tell it for real. A lot of cookbooks by restaurant chefs will be adapted for the home. Either because they don't actually want to say how they do it in the restaurant or, more likely, more often, because some well-meaning editor says oh, you have to simplify this for the home. And they wind up creating a totally different recipe. That basically doesn't work, often. Probably my single most valuable thing is when the recipe actually works, when it's real deal. The way the chef would actually recommend you make it.

So do you find yourself generally more drawn to chef and restaurant cookbooks as opposed to something more like The Joy of Cooking that's more for the home cook?
I mentioned the Cook's Illustrated, of course. Those are very useful for understanding standard American cuisine. It isn't really just standard, it's well-executed standard American cuisine. Because the Cook's Illustrated people go to a lot of effort to make sure that things work. But probably most of my cookbooks are from chefs.

There are some that I value greatly that aren't, though. Obviously Julia Child never had a restaurant, that was another hugely influential cookbook for me. I've cooked most of the recipes in the book at one time or another, it was a great way to learn classic technique.

There are a few people like Paula who have gone to a lot of effort, often with a foreign cuisine, where they've gone to a place, they've immersed themselves in it, and they're coming back like an anthropologist that's going to tell you about this other culture. Those capture something very different than a restaurant [cookbook] would. If you wanted to learn Moroccan cooking, it's not clear that there's a restaurant in Morocco with the right recipe, and in a place like Morocco a lot of the best cooking isn't even done in restaurants, it's done in private homes. Without having Paula go there and spend a bunch of time, you're not going to find it.

You sort of touched on this, talking about when restaurant recipes get dumbed down or overly simplified, but what are things you dislike seeing in cookbooks?
I don't like filler in cookbooks, where there's a bunch of second tier recipes put in there just because. The place where you find that horribly is in cookbooks on barbecue or chili or cookbooks that are about a single topic. So for barbecue, you're really looking at how to barbecue meat, and there's really only so many different cuts. So really the book is about five dishes, and I think that should be okay. But then they put about a zillion other things in there, they think they have to pad it out. And often the ones they pad it out with aren't all that interesting.

Do you have a particular barbecue book you do like? I've been looking for a decent one forever with no luck.
Well, I have them all. Barbecue is something of an obsession for me, as it was for Modernist Cuisine. I think I have every book on barbecue. That might not be fully true, but it's damn near true. Hundreds of them. Many of them will have a few good points in them, Paul Kirk has a couple of books for example. John Willingham, who's a guy who I've cooked with and have been on his barbecue team, there are a few good things to learn from his book. But I don't think any of them are really very good to be honest.

One of the things with barbecue books is that someone thinks they need to be written for people with a sixth grade education. I said all of that very appropriately, I'm not meaning to insult people who like barbecue. You see this phenomenon in various aspects of literature but it's particularly prominent here, where people say okay, barbecue is about good ol' boys that want to smoke some meat. And then they go through and they edit the thing to be so simplistic that it's almost insulting. Yet the barbecue fanatics that I know aren't that way at all. It's always annoying when things are dumbed down too much.

Anything in your collection that's particularly rare?
I do have some rare books, but I don't have too many rare cookbooks. It's an area where I — somebody sent me a link a couple months ago because Daniel Boulud was selling part of his collection but by the time I clicked on the link everything was over. So I've got a lot of out-of-print cookbooks, but in terms of hyper valuable, oh my God it's 200 years old or it was Escoffier's own copy, no, I don't have anything like that. I suppose I should.

How about anything of particular sentimental value?
I mentioned Paula Wolfert's first book, that has sentimental value, cooked out of that for a long time. Some of James Beard's books and Julia Child's books. I wouldn't really refer to them now but they certainly have a lot of sentimental value. Diana Kennedy is one of these people who's gone to a place and found lots of cool stuff, Mexico in her case. She has lots off excellent regional cuisine.

You know it's interesting, when it comes to Chinese food, I've got some decent Chinese books but I think there's more that can be done there. There's lots of cuisines for which that's true and you always wonder is it because the cuisine's not that interesting or is it because the right person hasn't come up?

Well, obviously the former reason is not the case with Chinese food.
No. In Chinese food there's been some good books but not a good broad one, in my view. Fuchsia Dunlop has a Sichuan book and a Hunan book, and those are interesting. There are some Chinese chefs with translated books that will cover some specific things. Part of the problem is that Chinese food is so big and so broad that it's difficult to cover it. Another thing is that a lot of the books that are written by people in this country — regardless of [the author's] own person ancestry — a lot of them are really made for adapted food, not real Chinese food.

That's an interesting tradeoff, because sometimes that's exactly what you want. Sometimes the original idea of the dish, the authentic dish isn't very good. You know, Heston Blumenthal has this great restaurant in London called Dinner which is all about historical food. And the one thing you can be certain of is that the food is not authentic, nor do you want it to be. Food from the 1400s would be filthy. It would be probably half rotten. Authenticity is not the point, what you want to do is abstract out the most important aspects of it.

Anything you wish you had but don't? Something you wish someone would write?
There are certainly lots of great chefs I know that have not written a cookbook, and I would love to see their cookbooks. David Kinch at Manresa is an example. Wylie Dufresne at wd~50. Homaru Cantu at Moto. Those are all people who have cooked great food but they haven't written a book yet. It would be great to see more out of Thomas Keller. He's served a whole lot of dishes since [The French Laundry Cookbook]. I understand he's got Bouchon and the Ad Hoc books, and that's great, but what I'm more interested in is the high end of it. I want to see well, what else has he come up with at the French Laundry? It would be great to see a follow-up. You could say the same thing about a lot of chefs that maybe they've done a book but they're so fantastic, so influential that you'd like to see a larger amount of their oeuvre put on paper so you can study it.

Sort of like Ferran Adrià's catalogs.
Yeah, exactly. Well, there's one. He hasn't done one of those in a couple of years. I think since 2005, 2006? You look at these books that go year by year, we'd love all the way up through 2011. He's got five or six years of books to crank out.