Alex Suarez of Cobra Starship on His Days as a Chef

Share All sharing options for: Alex Suarez of Cobra Starship on His Days as a Chef 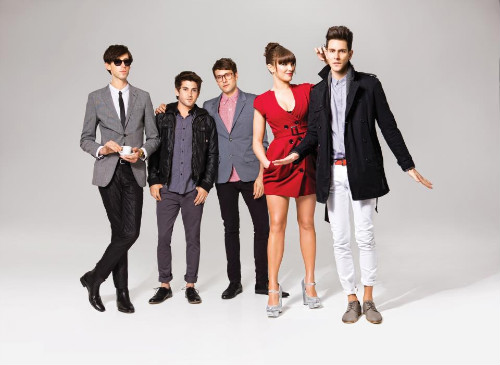 As the bassist of Cobra Starship, Alex Suarez has as his day job the task of churning out pop hit after pop hit (most recent evidence of this on the band's well-reviewed new album "Night Shades"). But before heading up to New York to do what he does now, he attended culinary school in his home state of Florida, started up his own catering company, and ran his own restaurant. Last week, Suarez got on the phone to chat about his experiences as a chef and how he maintains a love for food and cooking while playing in a band and hanging with folks like Katy Perry, Justin Bieber, and Rihanna.

So you used to be a caterer?
I used to be, yeah, in the early 2000 years. I started a catering company in Central Florida that specialized in wine pairing events. We ended up catering events, teaming up with wine purveyors that didn't have a food license. We used to do seven or eight course meals. It was a really educational experience and something cool to be a part of.

Did you go to culinary school?
I did. I went right after high school to the Florida Culinary Institute, which is a really great school — a great team of chefs run it. They've been doing lots of work to gain more cred. It was a short program of eighteen months where you tried everything first before deciding what you would focus on. I decided I would do full-on culinary arts and did my best to pursue that.

Your goal was to be a chef, then?
Yes, that was ultimately my goal in my life. I had always been playing in bands in Florida and had held seasonal jobs at yacht clubs and things like that, but that was what I wanted.

What kind of training did you have? What were your strengths?
I was classically trained in French cooking. A really interesting thing happened to me when I got to Orlando. I took over this place with a sous chef that was beautiful but had horrible food. We ended up doing everything from gourmet deli food to fine dining southern.

What are some examples?
We'd do a po'boy for lunch, but also twists on dishes like an osso bucco. Instead of doing the classic with veal shank and risotto, we would do braised pork shank with red-eye gravy over poblano. It was a lot of fun and was a major focus of mine for a while.

What was the restaurant called?
It was called Hot Olives. The catering company's name was Time To Dine.

Do you still cook?
I cook all the time. The most recent food thing I've done is consult at a Brooklyn restaurant my friend opened up. I don't want to take credit for it because what they do is fantastic, but it was cool to work with them.

What's it called?
Miller's Tavern, an awesome little restaurant that's quite popular in the neighborhood. It was a fun thing to be a part of.

But basically, I had a falling out with one of the chefs in the company, and soon after that, the opportunity arose for me to go to New York. So I just took it and ran with it. I got a BS job delivering groceries, since I needed money — it was actually a good way to get to know the city — but soon I hooked up with Ryland [Blackinton], who also plays in Cobra, and one thing led to another. We've been doing it every since.

Where do you like to eat these days?
There are so many here. My girlfriend keeps a list. One of my favorites in Manhattan is Del Posto, which is unbelievable. Just enjoy every bite. I also love places like Ippudo, which is one of the best around. Super tasty, great service, great vibe. I really love Five Leaves.

What do you like there?
It's funny because they don't have that much vegetarian stuff there.

[Gabe Saporta crashes the phone call: "I want to say hello to the other Gabe. Bye now."]

Jesus Christ! Anyway, we like to order a bunch of different small plates there. Definitely always get the truffle fries, which is a great flavor. Also the cheese plate.

Oh, you're a vegetarian?
Yeah, three years now. It's funny to go from full-on carnivore in culinary school to this, but I kind of like the challenge.

I also like Otto. In L.A., there's a great Mexican stand in the Grove. I can't remember the name of it.

Lotería?
Yes! That place is the jam. They do a really good huevos diablos or whatever it's called — a version of huevos rancheros. I get that every time I go out there.

We're running out of time. Any last words?
I would just emphasize that people should try as much different stuff as they can; pickiness drives me crazy. Expose yourself to what's out there.

Video: "You Make Me Feel"