Top Chef Texas Ep. 3: Have Your Snake and Eat it Too

Share All sharing options for: Top Chef Texas Ep. 3: Have Your Snake and Eat it Too 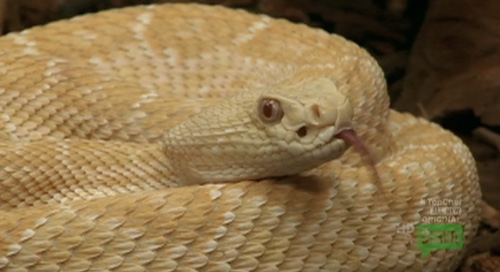 How quickly this show makes me eat my words! For me the end of the two episode, 29-chef preseason could not come soon enough, and this week's installment should have been the ninth season's true premiere: 16 chefs remain, Food & Wine Magazine, grand prize furnished by Lean Pockets, etc. I thought it was ideal: we've gotten our quick introductions out of the way, and the premiere could focus on high-concept Quickfires, budding rivalries, and Elimination Challenge set pieces. Technically, last night's episode delivered that. But it landed flat for me, and I found myself wishing the show was still eliminating 33% of the contestants every episode. I'm spoiled, and I want so many of these people to go home already. Go home. Heck, I will pack your knives FOR you.

The 16 chefpesticles gear up for their first Quickfire, and let me remind you that Beverly continues to be the best. She tapes up this nonsense sign to her mirror announcing her as the winner of Top Chef Texas. Use the Secret! Visualize your goals! Make a dream board. My dream board says, "Congratulations Max Silvestri! You no longer have to write about Top Chef!" 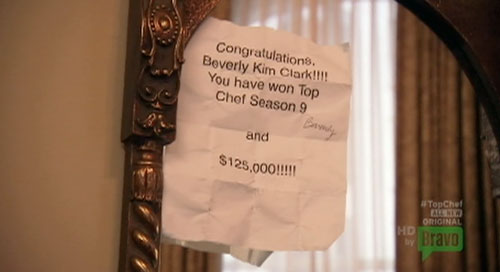 The guest judge this week is Johnny Hernandez, the chef and owner of La Gloria in San Antonio. He is wearing a shirt also owned by everyone's uncle in the Southwest. Meanwhile Padma is wearing cargo pants, despite having clearly never once carried cargo in her entire life. Are those tiny pockets where she keeps her quaaludes? Or her edibles? You guys know what I mean when I say edibles right? "Take me to your dealer." - a chill-ass alien. 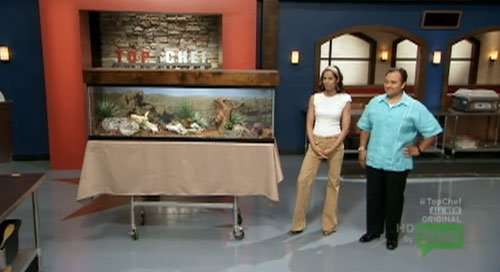 To win immunity and five grand, everybody has to cook snakes. Oh no, live snakes! Keith boldly declares, "I don't like snakes." Whoa, man. Don't rock the boat. You are a total outlier. Honestly, I realize that Indiana Jones made hating snakes cool again 38 years ago, but I think we can all agree we don't like snakes. All of us. Who actually does like them? The only types of people who enjoy the company of snakes are grown men animal trainers paid to go onto late night talk shows and daintily drape reptiles over the necks of the hosts, or 12 year old boys who suspiciously/sadly wear the same t-shirt every day and have a mustache of 9 individual hairs and smell like ferret musk. And both types don't even like the animals themselves; they just like the reaction they get when they hold them near to rich white men in expensive suits or moms and young girls, respectively.

The chefs' ingredients are in boxes in front of them, and for a second this episode borders on interesting when it seems like they'll have to kill the snacks themselves. Alas, no. The snakes are dead. They just have to filet them. Boring. 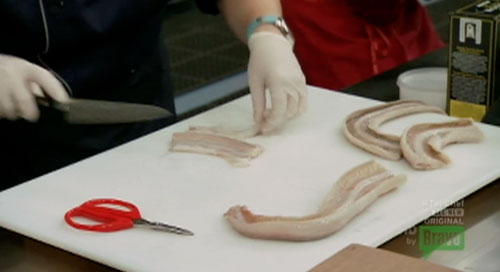 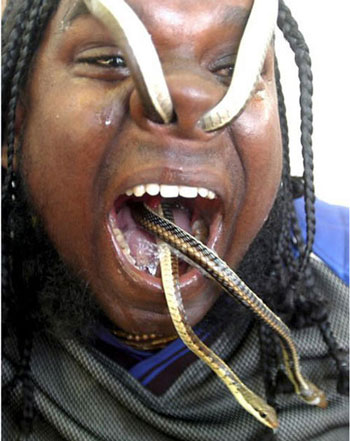 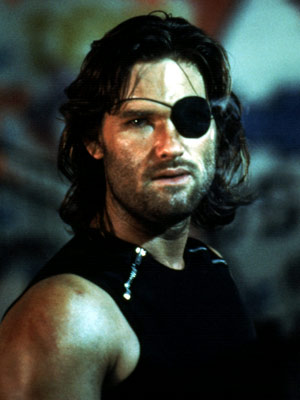 Dakota is the winner. She is excited. She wins the money and the immunity and we learn that she's straight-edge. I wonder if her favorite genre of music is applecore? Does that joke even make sense? 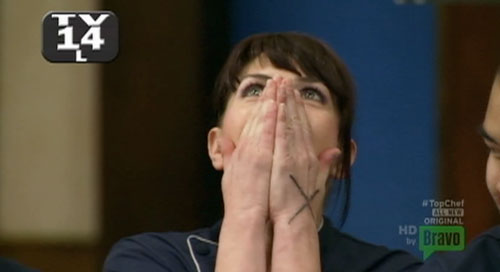 Everybody draws knives for the Elimination Challenge, splitting into a Green and a Pink team. A child is paraded before them. Ed says, "This little girl, I don't know who she is. Maybe she is a Mexican rockstar." That seems racist! Is it because she's dressed up and on television, Ed? Maybe she is Selena. I feel like you don't hear anything about Selena anymore. Totally dropped off the map. 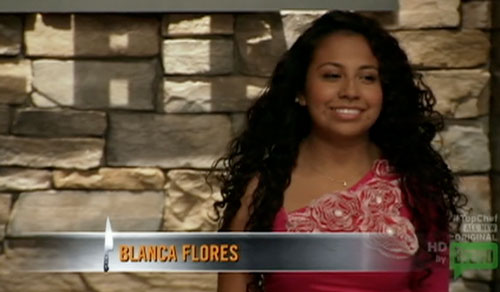 The teams have 30 minutes to plan their menu before the grocery store. The green team is more organized, led by Chuy and his big goat plans. We learn that the pink team's Lindsay has lived and worked in Mexico. She must be an expert. Top Chef uses this photo to illustrate her traditional Mexican training. 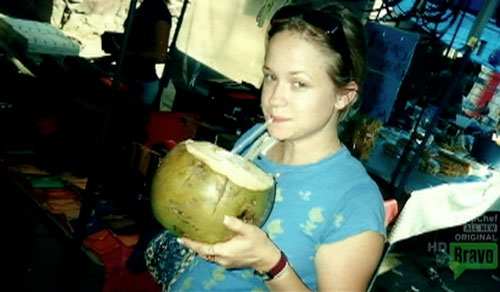 Beverly flips out at the meat counter and starts screaming, "I am sorry I am very very important, what I am doing is the most important dish here, I need help, just start butchering I will tell you when to stop, everybody else here can wait." It's pretty spectacular. 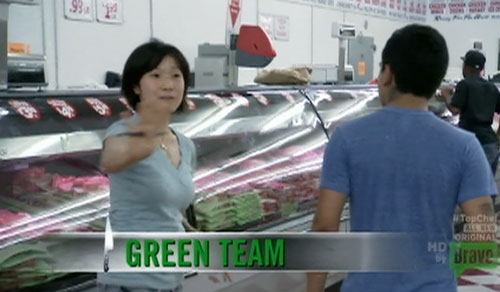 Keith is tasked with buying shrimp for Lindsay's shrimp cocktail, and he buys precooked shrimp. LIndsay is furious with him. Admittedly, that was a silly thing for him to do, as even my dad won't buy precooked shrimp, but at the same time he is very apologetic and wishes someone had steered him in right direction. (We see Chris Crary say, "Whatever, get it" when Keith tells him he's going to buy precooked shrimp. Crary, I have my eye on you.) Keith says, "Is it me against the team? I'm feeling alone." This guy has been to prison, and *now* he is feeling alone. My heart is breaking, everybody. I love Keith.

The chefs arrive at the restaurant and spend 2.5 hours prepping their food. It's fascinating. Chop chop cook. Watch the show. Have you seen the show? It's great, check it out.

Now it is time for a birthday party! Fancily-dressed friends and family and reality show hosts await the birthday girl's arrival. Blanca saunters in, and before kissing her mother she is introduced to the true Birthday Queen, Padma. What are you looking forward to most, Blanca? "The food." This girl gets it, and she's got a great life ahead of her, no joke. 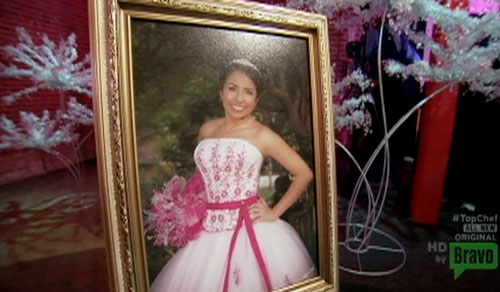 We commence with the food portion, and there is so much. Each team sends out many appetizers as well as 7 or 8 dishes per team. Would you like me to describe them all? I won't! Many look good. Chris C's corn, Chris J's empanada, Bev's short rib asada, Chuy's braised goat, Heather's cake. Though Heather's cake is very ugly. It looks like a Royal Wedding hat BOOM that joke is right on time. 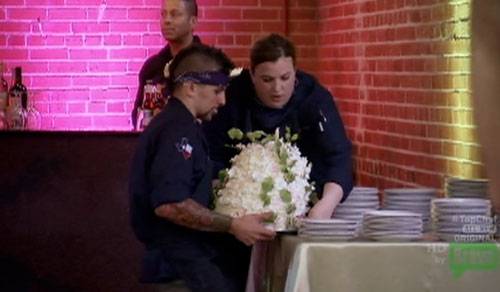 Blanca dances with her father. Bev starts crying, because she is the best. The dance reminds her of her relationship with her father, and how she wants to show him she can do as much as a son can do. Whoa! Now I'm crying. My keyboard is covered in tears. 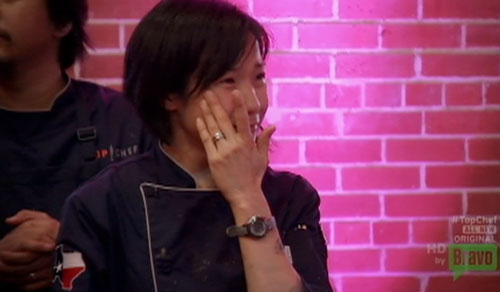 The green team wins, and Padma wants to see Ty-Lor, Sarah, Lindsay, and Keith from the pink team. These four are the judges' least favorites. Dakota's cake would be up there too if not for immunity. The four bottom chefs proceed to melt down and blame each other and take no responsibility. Sarah pisses and moans and yells at Keith for buying the wrong shrimp and for using flour tortillas in his enchiladas, even though in the region he's from that's how it's done. Keith politely offers up that he would have happily adjusted to Texan tradition had even one person mentioned it to him, which they didn't. Keith is so polite, and Sarah and Lindsay put on a disgusting display of throwing the blame around. Most of it lands on Keither, and he is sent packing. 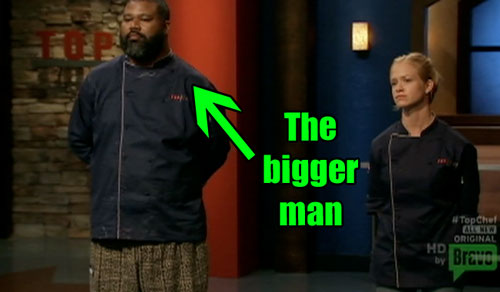 What a shame. Keith had already been one of my favorites, and now he has to go back to living in jail, as winning Top Chef was a condition of his parole. Tragic.