Bartenders on Daring to Pair Cocktails With Food

Share All sharing options for: Bartenders on Daring to Pair Cocktails With Food 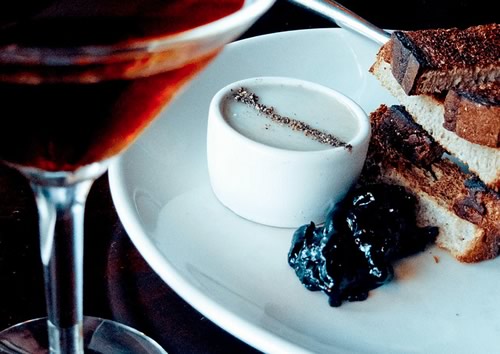 Food loves wine; it seems natural. But you never hear anyone say, "food loves cocktails." Cocktails really only got rolling in the 19th century, and even though they've had some time to settle in (barring Prohibition), they just don't seem to click as readily with food as wine. As cocktail pairing dinners become more common, there is much ado in the food world about whether cocktails and spirits should be paired throughout the progression of a meal at all.

Will high alcohol wipe out the integrity of a dish? Will sugar and citrus dull the palate before hitting the third course? More importantly, will guests be swaying and blathering obscenities by dessert? If done incorrectly, then quite possibly, yes. However, as the Russians have proven with zakuski (pairing hors d'oeuvres with vodka) it is not impossible. And occasionally, blathering is still acceptable. Here now, five of the country's well-seasoned barkeeps — Leo Robitschek (Eleven Madison Park, NYC), Kevin Diedrich (Jasper's Corner Tap, SF), Matt Piacentini (The Beagle, NYC), Jeffrey Morgenthaler (Clyde Common, PDX), and Evan Zimmerman (Woodsman Tavern, PDX) — discuss when, where, how, and why to pair the hard stuff with food. 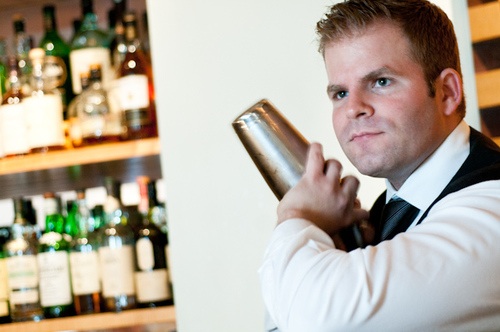 From James Beard award-winning Eleven Madison Park, Leo Robitschek is familiar with pairing for all kinds of diners, patrician to picky. He knows every classic in the book, but consistently pushes his program forward with seasonally-focused cocktails like the cognac-forward Madison Park Smash or Averna laden Sippy Cup.

In general, I prefer not to have a full cocktail and food pairing menu because my view is that you should first consider what is best for the food. An eleven-course tasting menu with cocktail pairings seems a little too much. Having a number of high-proof spirits with added sugar or citrus alongside all food is detrimental for the palate, and can wash out a dish quite easily. It's too much for the taste buds.

For Eleven Madison's tasting menu we used to do only wine pairings, but now the menu says, "beverage pairings." We ask guests if they prefer traditional wine pairings or if they're willing to be a little more esoteric and pair cocktails or beer as well. For us the pairing should always flow with what comes before and after that particular course. Just like you would never start with pork and then move to a fish or a salad, we would never begin with a big brown spirit, stirred and strong and then move to a light citrus-y cocktail served tall. We work closely with the kitchen to make each pairing work.

Ideal pairing: Suckling pig and The Repossession (reposado tequila, amontillado sherry, apricot liqueur and lemon). "The acidity of the cocktail works well to cut the richness of the pork." 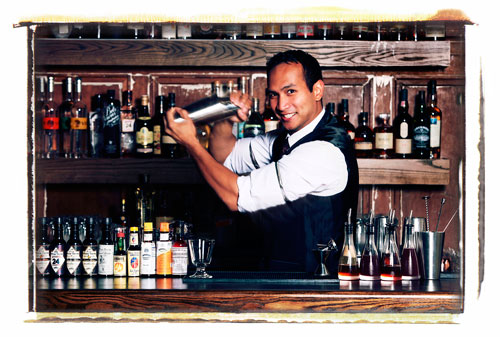 With a well-established beer program and elevated pub fare, the cocktail program at Jasper's Corner Tap of San Francisco may initially be overlooked. However, on closer observation one will find cocktails on tap and a well-rounded selection of seasonal drams curated by head bartender Kevin Diedrich.

I always feel like cocktails should be offered in small portions when pairing. Cocktails tend to be high octane, and getting a guest drunk in the first couple of courses isn't an advantage. I want guests to remember the cocktail and the experience at the restaurant. I've gone to Spirited Dinners where full size cocktails are given out, and people are just housed. They're not enjoying the food anymore because they're just thinking about getting more food to negate the alcohol. Lower alcohol cocktails are always a good option too—vermouths and bitter bases.

It's fairly easy for us to pair at Jasper. I try to represent each spirit category on the menu and include two or three seasonal ingredients that our kitchen is using. Many times, we work to compliment the kitchen, but sometimes it's like the kitchen works to compliment us. So many people come in to drink first and food is a natural part of the progression.

Ideal pairing: Poutine with lamb ragout and the Black Cross (black tea infused Smith and Cross rum, Dubonnet, Belle de Brillet). "This is good cool weather fare. The Black Cross is new to the menu and stands up well to fries and meat." 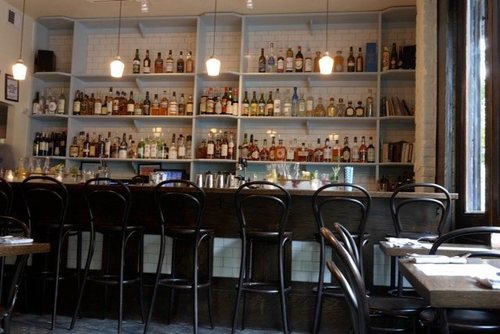 With special section on the menu dedicated to pairing boards, New York City's The Beagle pushes boundaries challenging diners to taste something they may not have considered pairing before including beer and sherry.

I think pairing cocktails can be done and be enjoyable. However, I don't think it's foolproof. I don't think you can pair cocktails and booze with anything and it will work, but I do think it should be explored.

My introduction to pairing spirits was in Sweden when I was having dinner at a friend's house where they did pickled herring and aquavit. Pickled herring! The only thing that could pair with something so strong was straight booze. This got me thinking about taking two thing that are unpalatable and make them palatable. And then I started thinking about starting with two things that actually are palatable and pairing them.

The key to making it work is keeping it simple. I think we say "pairing" because we don't have a better word for it. At The Beagle, we use the alcohol as a component of the dish whereas wine is more complimentary. It's a juxtaposition. With spirits it's a bit easier. I wouldn't say they're less complex than wine, but they're more straightforward. You can put certain spices in food, or a squeeze of lemon to coax flavors out of spirit and find links between it and the food like puzzle pieces. Wine and food are more like complimentary colors that look nice next to one another. With spirits you've got to go a little bit deeper and focus on the scientific and chemical aspects. Why do these things work with one another?

In addition, you do have to deal with the average diner's palate, which is not necessarily able to handle the strength of a stirred cocktail at first taste. As bartenders, we're booze hounds. I can drink straight booze and still perceive the intended flavors of a dish, but you have to respect the fact that other people can't necessarily tolerate high alcohol content.

Ideal pairing: Mackerel and Aquavit. "The pickled fish and onions go well with the punch of the aquavit. It's been done for years so we know it works." 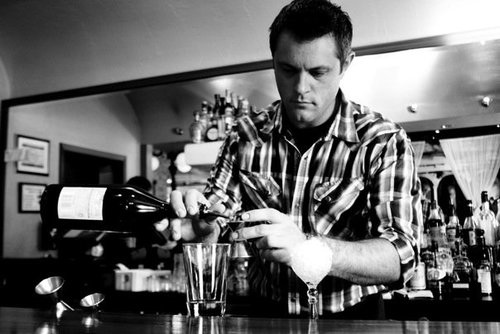 A stone's throw from wine country, Portland is no stranger to good food and wine. The city's cocktail scene is at the heels of other booze happy capitals like New York and San Francisco with head bartender of the Clyde Common, Jeffrey Morgenthaler leading the way.

I think it's a great opportunity to show what you, not just as a bar, but as a restaurant can do. There are two ways to go about pairing. You can craft a pairing menu or think on the fly. We've done both at Clyde Common. On a nightly basis, I have people who order a dish and say, "I want a cocktail with that." My first thought is, "Why?" But it's not impossible. One's ability to pair on the fly relies on what you've already got in your back pocket. If the drink menu you work with doesn't go with the food, you're probably not doing something right. I can usually grab something off of the menu that will pair well because that's how our program is built. Our drink menu isn't radically different from the food menu. The ethos of the bar goes hand in hand with the restaurant.

The Clyde's food tends toward European flavors and themes. We have a whole trout wrapped in prosciutto and stuffed with greens, preserved lemon and herbs. It's pan seared and roasted then finished with a fried egg and a mushroom cream sauce. It's sweet and savory and earthy and salty. My favorite drink to pair with it is an Irish Goodbye (equal parts Irish whiskey, Cynar, Lillet and a lemon twist) because it's all of those things too. Pairings should enhance and bring out the best in both a dish and a drink.

Some foods require lighter cocktails, which I think some bartenders are afraid of. The Aperol spritz, the Bicyclette, Americanos. You can't have a fuckin' Manhattan with every course. You'll just be wasted. Grabbing the vermouth, or the sherry, or the wine as a base is a good option. Three ounces of 80-proof liquor for every course is not. 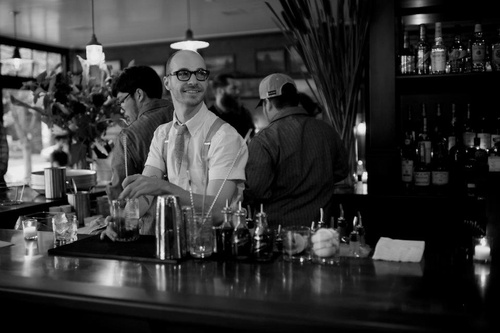 The newly opened Woodsman Tavern of Portland, Oregon is nothing short of gorgeous. The same can be said of its wine, beer and cocktail selection crafted by beverage director Evan Zimmerman.

I have a strong wine background because I've worked as a sommelier so I'm pretty hard core about pairing wine with food. I'm a firm believer that there is a cocktail hour, and it is before and after dinner. However, there are cocktails that always pair classically like steak with martinis and whiskey with oysters. I'm firmly entrenched in wine, but that's part of being a good bartender. Bartenders should know wine. A bartender should understand when it's appropriate to have cocktail and when it's best to have wine or beer. When you're eating grilled octopus and fresh fagioli beans, a Sazerac is not your best option.

However, when afforded the opportunity to work with a chef on a tasting menu it can be great. You can adjust a cocktail until it becomes part of a dish as opposed to a pairing. It can work well, but I think it requires a lot collaboration between who's making the food and making the drinks.

The Woodsman was a collaboration envisioning what the restaurant would be as a whole rather than as singular elements. For the cocktail menu, we knew we'd have oysters and ham, so we worked in some delicate two and three ingredient cocktails with light spirits. In the spirit of the Woodsman, we have a lot of whiskey cocktails, but not big, punchy, gnarly ones. People sit down and want oysters, which often overlaps with cocktail hour. Our menu definitely accounts for that.

Ideal pairing: Oysters and the Alaska (gin, yellow chartreuse and orange bitters). "The Alaska is such a classic pairing for oysters. It will always be on the menu."

Leslie Pariseau is a writer in New York City. She prefers martinis with her oysters every day of the week.