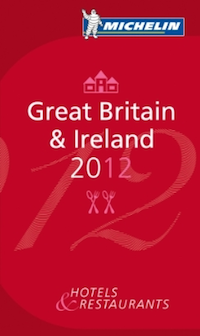 The 2012 Michelin Guide to Great Britain and Ireland has been announced, and additions on the British side include the country's first-ever two-starred pub for The Hand & Flowers, chef Tom Kerridge's pub in Marlow. Chef Sat Bains' eponymous restaurant in Nottingham also came away with two stars for the first time.

This year’s guide sees the first British pub to be awarded two Michelin stars. The Hand and Flowers in Marlow, Buckinghamshire, was opened by Tom and Beth Kerridge in 2005 and received its first Michelin star the following year.

Editor Rebecca Burr said “This is a good news story for the British pub industry and confirms our view that pubs serving good food are the ones that continue to thrive. In the 2012 guide we are delighted to have 13 pubs with Michelin stars”.

At the Hand and Flowers, Tom’s cooking has risen to new heights. His dishes are sophisticated yet familiar, and are a perfect match for the relaxed surroundings of his charming pub”.

The second restaurant to be promoted to two star level in the 2012 edition of the guide is Restaurant Sat Bains in Nottingham. Sat’s cooking has always been original and creative and now focus has been added to the flair. The restaurant gained its first star in 2003.

This year’s guide, published for the first time before Christmas, sees a wide geographical spread of new stars, stretching from the Driftwood Hotel in Portscatho, Cornwall to Glenapp Castle in Ballantrae, Scotland. There are three new stars in Scotland, one in Wales and four in London, which include ‘Dinner by Heston Blumenthal’. There are also three new pubs with one star.

The guide also highlights those restaurants that represent value for money. We are therefore delighted that this year a further 28 restaurants have been awarded a Bib Gourmand, the award given to those establishments offering good cooking but at moderate prices.

Rebecca Burr said “Our readers have told us how much they enjoy these places so we are very pleased that our inspectors have found so many new ones, particularly in London”.

Also launched today is the Michelin Guide London 2012, priced at £10.99(€12.99 in Ireland). This guide provides extended text on London’s restaurants, with additional photographs and information on all starred establishments. It also includes a selection of London’s best hotels, across all categories.