Full disclosure: This week we had five of this season's contestants in our shop. We have some very intriguing video footage of them making ice cream cones (Carlos, you naughty boy!), but it's locked in the vault — for now. They were all a blast, and despite some of the bitchy things we've said about them in the last few weeks we had the most laugh-filled afternoon that our store has seen yet. 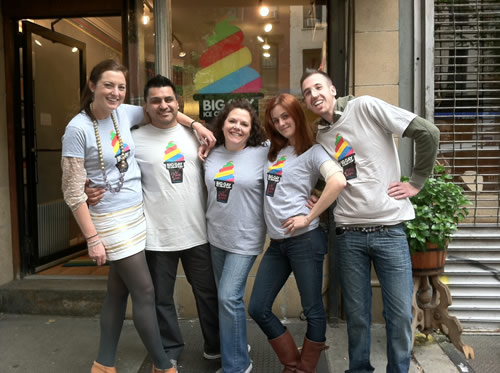 ON WITH THE SHOW

Alliances are formed. Strategies are developed. Bromances deepen. Um, what? We guess you just have to actually be on the show to understand what is meant when Chris and Matthew — our resident bromancers — shake and hug and goose each other to the tune of “it’s you and me to the end,” or when Katzie says Sally has aligned herself with the guys because she thinks she’s better than the gals.

Exactly how do you accomplish all of that? This isn’t like Survivor where you can (sorta) control your situation. These are straight up challenges where you really are only competing against yourself. It’s a bit like being in a spelling bee and teaming up with your BFF to make it to the finale.

Here’s what must be going on in the heads of Chris and Matthew:

But here’s what we see:

Gail looks especially sassy (we’re loving her hair during this challenge), so this must spell trouble for the last seven contestants. With guest judge Mark Israel, from Donut Plant here in NYC, they’re told they have to make a donut and pair it with a coffee. The winner gets $10,000. There’s just. one. more. thing. Bam! Out walks Johnny and they’re told that there will be no immunity, and that this quickfire will end with an elimination! That’s funny, donuts and coffee usually result in an elimination for Doug as well, like clockwork.

Time to make the donuts!

The chefs set about making their crullers, beignets, and whatnot. Chris does a churro that looks pretty good, but gets no feedback on the taste. Just a weird comment that the judges like the “softness of it and the texture.” Moving on...!

Orlando gets his panties all in a knot because of Katzie’s dessert. It’s more of a plated dessert and in his confessional he’s insistent that she HAS TO GO. Orlando, honey, she may have her ups and downs, but how many wins has Katzie pulled so far? Yeah, that’s right. Your wins? Yeah, that’s what we thought. This will be nothing compared to the bigger knot he gets into over the spice of his spiced beignet — it leads to a wonderful little tiff with Johnny about absolutely nothing. You said cardamom. No I didn’t. You said spiced. But not cardamom. Seriously? We’re having this discussion?

Matthew’s dry donut suffers from the cream filling not making it inside the donut. We see inserted shots of Chris being all worried, saying he doesn’t want Matthew to go home for his donut. Well, come on, Chris, weren’t you just talking about this? Use that strategy of yours to keep him in the game!

Gail drops the big news. Matthew, Orlando, Megan, one of you will be going home. Right now. Well, technically, not until after this commercial break. Forward through the commercials. Waiting. Waiting. Megan! Her donut, more firmly affixed to the plate than heat tiles to the space shuttle, gets her tossed from the show. 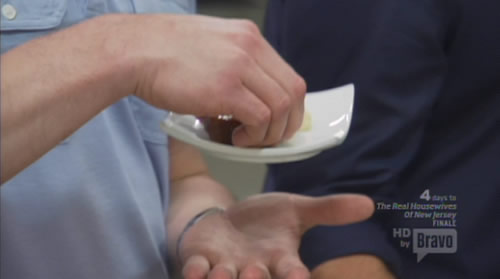 Sorry, Megan: but unless you sealed yourself to the kitchen floor with your donut glaze you have to pack your knives and go. 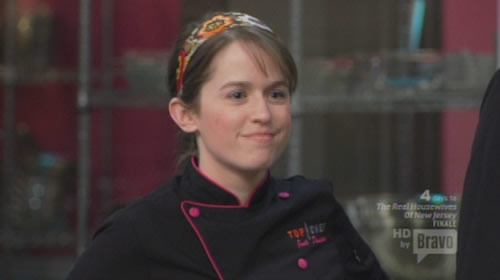 Argh! The cast's charisma has been taking too many hits. We'd probably have turned the show off (maybe for the season) at this point if not for our agreement to bring hard-hitting updates to the world.

Before moving on, let’s pause one more time and mention how smoking hot Gail is looking this episode! 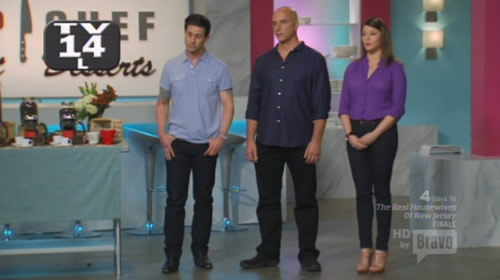 Gail gives them one word: Chocolate.

Carlos responds with four: Chocolate. Banana. Peanut Butter. Come on, Carlos! You just won ten grand without using any of those ingredients Why are you defaulting back to the same stuff you go to each episode?

Two teams of three are chosen (here we go again). Carlos, Orlando and Sally are team blue. Matthew, Chris, and Katzie are team red. The teams need to make a chocolate showpiece and one chocolate dessert per contestant. Until now we have been irritated with all the remarks about Katzie’s youth, but we are immediately withdrawing our defense: Katzie, why the hell are you wearing Silly Bandz?! 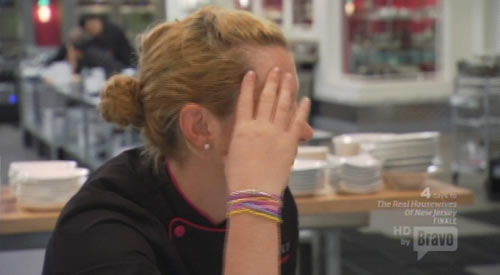 The editing quickly devolves the challenge into a head to head competition between Chris and Orlando. The four others are now just superfluous — little gnats that seem to buzz around our two self-anointed showpiece gods.

While not making his team’s centerpiece, Chris spends his time using phrases like “my vision,” “I’m creating something no one else can do,” “losing is not an option,” “I crap thunder,” “I am a sugar genius,” and “I am hung like a mule." Orlando has time to tell us how important it would be to beat Chris and offers up a little bit of romance: "I like desserts like I like my men?. " (wait for it? cream filled? covered in edible glitter?) "? tall." (Thud.) Orlando leaves his dessert to Sally and Carlos — "I don't have time to go into the kitchen and work, 'cuz I'm not going to sacrifice anything on my centerpiece." Sure, whatev.

Last week we schooled the girls on leaving all that posturing to the professionals. Fair is fair, so this week, we bring you the great one. Orlando, Chris, unless you were born Cassius Clay, please shut the fuck up.

Wylie Dufresne joins as the guest judge. But the surprise is that the contenstants are each others’ judges too. Cue the opportunity for the biggest egos to make up whatever shit they can about each other’s desserts. Listening to Chris go off about Orlando’s showpiece just screams phony. We don’t buy a word he’s saying and doubt he does too. Katzie's proportions are off and the plating isn't great, causing Orlando to go off on a long-winding and tiresome shred. Snore. Both scenes just reek of insecurity.

Honestly, the show pieces are both impressive, and we have to give them both props. But the desserts are all over the place Chris whips up what he calls a brioche, though it appears to be a chocolate Pop-Tart that was left out on the sidewalk during a hot day in July. 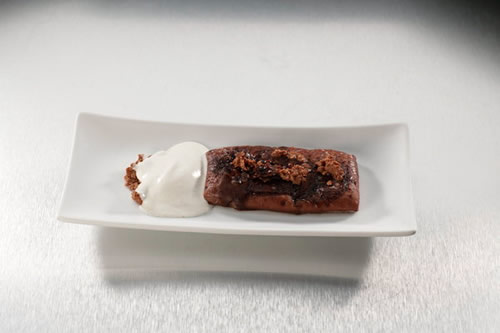 The judges enjoy Carlos’ cylinder (these things write themselves), but hate Katzie’s cube.

Orlando, Sally and Carlos pull the win. But an individual winner isn’t selected. Chris, Katzie, and Matthew sink to the bottom. 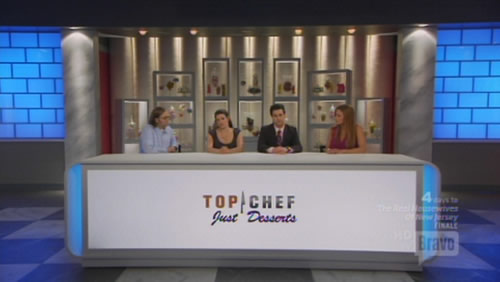 During Judges’ Table we are subjected to Chris’ perpetual raised eyebrow, blind-sided expression over and over again. If you took a shot for every time the editors threw in a shot of him doing that you’d be passed out on the floor by the second commercial break.

Wylie says to Chris "I found the texture (of your dessert) to be unusual." Ouch! If Wylie thinks it's unusual, it must be downright alien. Matthew's goods are way too sweet. But ultimately it’s Katzie’s turn to go home, taking her pearls and Silly Bandz with her 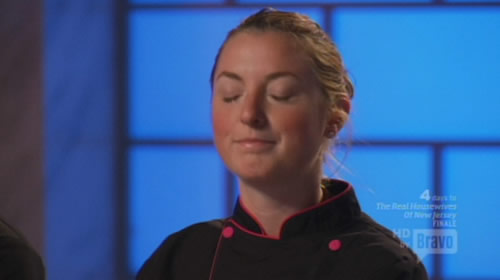 By the end of the episode the realization sets in that we probably won’t care about the three in the finale. Carlos and Matthew are both on shaky ground, which leaves Sally, Orlando, and Chris in the finale. If at the end all we get is a battle of the egos rather than desserts then leave us out.

Doug's donut story, which should not be read: In the early 90's I was driving along the Merritt Parkway and saw a BMW with the license plate "T2MDnuts" — or something like that. I chuckled to myself, and as I passed the car I looked at the driver. It was the damned Dunkin Donuts guy! I almost flipped the car. Two years later I was at Tanglewood Music Center, where Michael Vale (the real name of the "time to make the donuts" actor) and his wife were benefactors. We went to a party at their house, and I told them about their license plate nearly killing me. I wasn't the only person to say this to them, in fact they finally scrapped the personalized license plate because it was causing too many near-accidents.

I may as well take this story even further off the trail by adding the "bikini story." The Vales contributed to a scholarship at Tanglewood Music Center, and the recipient of said scholarship that summer was pianist Marta Aznavoorian. Mrs. Vale gave Marta a gift — the teeniest bikini we'd even seen. That was really weird.