Apple Hooks Up With Yelp For iPhone 'Virtual Assistant'

Share All sharing options for: Apple Hooks Up With Yelp For iPhone 'Virtual Assistant' 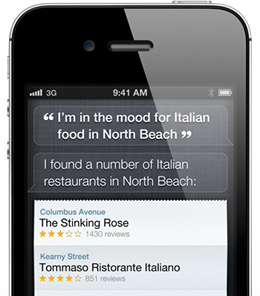 Yesterday Apple introduced the iPhone 4S; one of the new features is a voice-controlled "personal assistant." Called Siri, the new tool schedules appointments, provides weather reports, and finds restaurants based on queries like cuisine type and location. The restaurant info is provided by the review website Yelp. What could go wrong?

Backstory: Back in April 2010, Apple acquired the startup Siri, the maker of the personal assistant iPhone app, and now it's going to be merged into the iPhone on the OS level (the original Siri app was pulled from the App store yesterday as well).

The restaurant data in Siri is being culled from Yelp — and not from Google Places or any of Yelp's competitors (Apple's ongoing war with Google might have something to do with it, but before Apple's acquisition, Siri was already using Yelp for data). Yelp might provide the correct addresses and hours of restaurants, the user-generated rankings by Yelpers are repeatedly biased and unreliable.

From militant vegetarians to degenerate, frenzied Elites, not to mention what is likely an enormous number of fake reviews on Yelp, Apple's new restaurant discovery service is partially powered by untrustworthy and unhelpful reviews. While the sort order doesn't appear to be based on star ratings, the stars are prominently displayed and will undoubtedly inform users in their restaurant decision-making process.

The future: powered by Yelp. In other words, your mileage may vary. Here are videos of it in action (see the restaurant discovery at :50 in the first video):