Ferran Adrià on Understanding the Past, Present, Future

Share All sharing options for: Ferran Adrià on Understanding the Past, Present, Future

As Ferran Adrià and I continued our walk (see part one here), with his handlers consistently keeping a few paces behind us and fans gawking and occasionally stopping him along the way, the chef discussed the normal though fruitless impulse to anoint the next big chef or movement in gastronomy. In the process, he points out the problem that, to him, underlies all of this: a general lack of academic and historical understanding among cooks.

What do you say to people who criticize your corporate sponsorships, or something like the Dom Pérignon junket you had in the last months of elBulli?
Do you know how Harvard gets their money? [laughs] Telefónica is betting big on the foundation. And as far as the Dom Pérignon dinners, that money went straight to elBulli Foundation. I don't think it's Americans who have written these things.

Well, some, yes.
These things are normal here! Man, we are a private foundation. I am completely willing to accept as much funds as we need on a yearly basis to keep it going. It doesn't mean that they have me in their pocket. With an endowment — we're not talking Harvard here, since theirs I think is $30 billion or something — we'll be able to make sure that anyone can come, no matter how poor they are; we'll be giving out lots of scholarships. Like any other institution, the more funds we have, the more we can do.

And as far as those dinners, I had never done something like that before in the history of elBulli until this last season. But you know what? I have all the right to do it. I'm the guy who is paying the bills at the end of the month. The foundation can surely be criticized if there is something iffy, but it's very difficult to criticize someone on a business level.

I want to talk about how often you use the word "creativity."
It's a pretentious, horrible word, man.

Yes, but you use it a lot. Why?
I use it so that we can dialogue with people. For me, it just means making things. There's also an aspect of it that has to do with exploring limits. The way I look at many of the things I do, it's just different forms of exploration: The Family Meal book comes from an interest in the question of why don't we eat better in this simple context. At Tickets, it's investigating what contemporary tapas are. At 41 Degrees, it's exploring what the ideal place might be to relax and have a drink. But at elBulli, it's better to say that it's more about the avant-garde than it is about creativity.

Tell me.
That we've been doing this for years and years, and it's still polemical.

Everyone asks me what the next avant-garde is, and I honestly think that we need to wait twenty years. If not, it's just a fad, a trend. We'll see what it is. No one knows what it is. There was la Nouvelle Cuisine, there was the Spanish avant-garde, and now, so many chefs have passed through elBulli that most of the influential restaurants of the world have been touched by the restaurant in the past in some way. 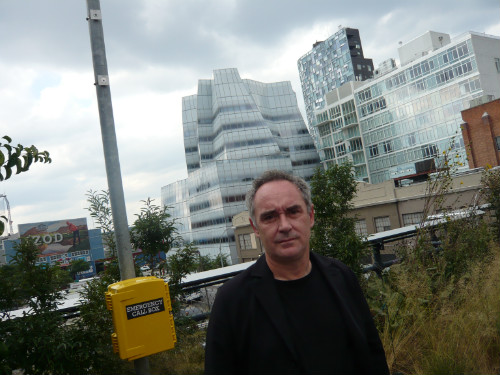 That brings me to something I wanted to ask you about, your disciples.
I don't like the word "disciples." elBulli isn't me. elBulli is the people who have eaten there, the people that have passed through the kitchen, and the people that have written about it. Every person has inserted their little bit of sand, their way of understanding the world, in that place so that it could exist. So they're not disciples or sons — if they are anything, they're brothers. They bet on it.

But what do you think about this new rush to anoint the next big chef, the next big movement?
It's normal. But we have to leave Roca, Grant, Bottura, Andrés, and René alone so that they can have fun and create. It will be very hard for a phenomenon like elBulli to pop up again very soon. What some people overlook is that the great revolution — these chefs have all been involved in it already. Up until 1994, when this movement was born, all of the creativity in cooking was in France. But now, the rules of the game have changed. It's in God knows how many places. The question is, what is this new movement, this thing that we all had a hand in making?

Can you speak more about that?
I have the Escoffier book, which is just wonderful. It has about four or five thousand recipes. Do you know how many recipes have been developed in the high-end kitchens of the world in the last two decades? Hundreds of thousands.

So it's completely atomized now, you're saying?
I have to emphasize that it started with the Nouvelle Cuisine, but that was less global. But with congresses, the internet, that spirit spread so fast and touched basically the whole world.

I think that with what we are discussing, the underlying issue is understanding history. It would make processing what's going on easier. How many people know the career trajectory of Michel Bras? Not too many. So when someone hears about natural cuisine being avant-garde, it's a little funny, since Bras was talking about a relationship with nature back in 1980. Saying that doesn't diminish natural cuisine, it's just that people who don't know tend to look at things in an incomplete way.

Your point, in a nutshell?
That there's so much information that there is disinformation. And also, that people don't study enough. There are few places where you can go and be taught about Michel Bras in an academic way, and about what Robuchon and Ducasse really signify. Are there any books that really give you a great perspective into American cooking in the last 40 years? Who talks about Girardet? What about Nobu?! Before him, how many recipes in the west incorporated soy sauce, much less yuzu? He touched thousands and thousands of restaurants.

With that sort of training, it would be a lot easier to reflect on what's happening now, and it would make a lot of cooks have a different vision of things. We've achieved a lot, but we still have some ways to go. We haven't really had the mechanisms to have this information. It's amazing that some great chefs have gaps in knowledge that would be unheard of in other disciplines. If we can't put the past — and the present — in some order, we won't be able to figure out the future.

Last question. Going back to your visit to Peru, your role as Spanish ambassador, and the closing of the restaurant, do you still consider yourself a chef?
I have for quite some time been involved in social issues and have been able to do some fun and I think effective projects. But I think that chefs need to realize what they can and can't achieve. They need to avoid cheap populism.

[The Phaidon rep catches up to us, points us to the closest exit. Time's up, and Adrià is slightly more rushed]

What are some things that can't be achieved?
One thing that comes to mind is that we're not going to be able to help kids' meals in schools. The amount of money needed is astounding. There are other things, too.

And what about things that can be done?
We can help in general information and awareness, which can be really influential. Also in the ecological and sustainable issue. In health; at Alicia, we just had a very, very successful blood donor campaign.

But make no mistake, I'm a cook.