Share All sharing options for: Wine's Spookiest Villains: An Introduction to Fatal Flaws 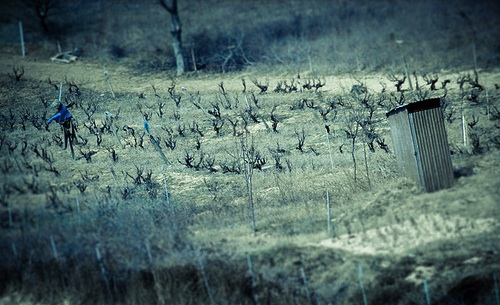 Wine is living; and by virtue of being alive, it's imperfect. While some flaws, dare we say, improve wine — for example, Brettanomyces (or, more affectionately, "Brett") at low levels adds an intriguing feral gaminess and VA at low levels can actually give some lift to a wine — other flaws result in more tragic fates.

So let's preface this whole thing by agreeing that our primary goal is simply enjoyment. Flaws — as spooky as acetaldehyde might sound — are only flaws if they detract from your personal enjoyment. But, since we're all reasonable, we understand that shunning the need for perfection doesn't mean accepting, with open arms, volatile imperfections.

If, for example, your Aussie Shiraz smells like burnt rubber or your Barolo is carbonated, understanding the causes of such disasters will help ensure that the trauma won't have you swearing off Barolo for good. So, for your back pocket and in the spirit of Halloween: an introduction to wine's spookiest villains.

The dreaded, soul-sucking cork taint. This is one of few wine flaws that is always, without a doubt, a complete defect. That smell of dank basement, moldy, dirty ski socks, and rotting cardboard — that's cork taint. It's a smell you've probably encountered before — perhaps even at the library, eating an apple, or hugging a friend. That's because TCA (Trichloroanisole) exists all over the place and it doesn't always taint the wine from the cork, but through it.

There are two main types of oxidation in wine. One is the favorable, slow oxidation of flavonoid phenols found in the skins, seeds, and stems. This process breeds complexity and rounds out the youthful edges on a structured wine. It's why we wine people are singing the praises of aged this and that. Good wine gets better with age. The other is oxidation of ethanol during fermentation, which can lead to excessive acetaldehyde. When this happens the wine may appear bright and youthful, but smells nutty and musty and has a dull, flabby quality on the palate. The body has been nabbed and all that's left is an emotionless shell of its former self.

This is one of the more common flaws we get to encounter given that it is not something that occurs before bottling, but after. Wine is a living thing and when it is bottled, say, unfined or unfiltered, dormant yeast will be bottled with the wine. If the wine is also bottled with even the tiniest bit of residual sugar, those zombie yeasts can wake up from the dead and metabolize the sugar, resulting in an unwanted secondary fermentation. Bacteria can also cannibalize malic acid or alcohol, resulting in the same thing, but no need to get too gory. The result: sour, effervescent wine.

VA (Volatile Acidity) is one of those "flaws" in wine that can actually add to its aromatic complexity at low levels. But when it reaches a certain threshold (which is different for everyone, really), it gives the wine a sweet and sour, vinegar smell and taste.

This is another one of the most common issues one might encounter in bottled wine. The first is caused by the excessive use of sulphur dioxide in the winemaking process. Small amounts of SO2 are created during fermentation, but in addition to this naturally occurring process winemakers add SO2 to wine at various stages of its life, from right when the fruit arrives in the cellar to right before bottling. The overuse of SO2 as a preservative and antioxidant is one of the most common modern winemaking abuses. In bottled wine it often smells like a burnt match, accompanied by a tingling burning sensation.

Reduction (which is often confused with high levels of SO2) on the other hand, results from a process whereby compounds may lose oxygen atoms during fermentation or ageing. Since fermentation is an anaerobic process, a number of reduced compounds, like hydrogen sulfide (rotten eggs, death) and mercaptans (burnt match, burnt rubber, rotting veggies) can be produced in the process.

Both are not permanent villains as they tend to blow off with considerable aeration, they're still stinky enough to disperse a crowd.