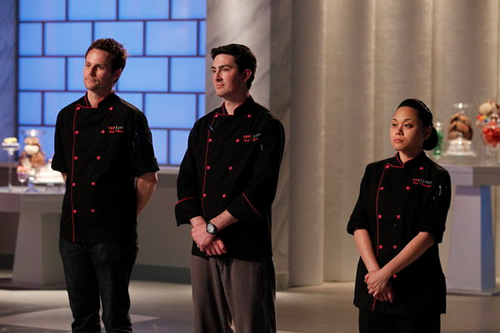 Spoiler alert: Chris won. If that’s all you need to know, feel free to stop now. If you’re twiddling your thumbs on this gloomy day and just absolutely need to read something, here ya go: 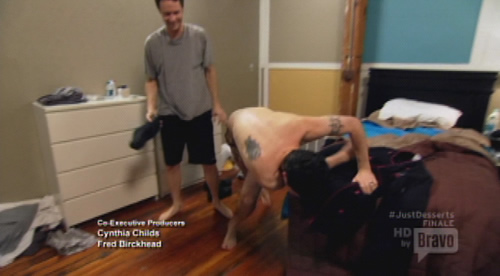 The last three contestants start off the episode doing exactly what we expected they’d be doing: Chris and Matthew are wrestling around with each other in their underwear. And Sally, well, just walks around.

The boys continuously reiterate the need to win the “Title of Top Chef” for their families – each is in it for their wife and child. Matthew drops an odd comment that he needs the $100,000 (provided by KitchenAid in case you didn’t pick that tidbit up) to prove how good of a chef he is. Sally makes us even more sad than she normally does by saying how winning would validate all the people she walked over and all the relationships she ditched all for the purpose of advancing her career. They’re all peculiar sentiments, especially when strung together, and they do nothing to draw us in.

Throughout the episode we’re hoping that Matthew will pull out an upset. Call us romantics, but he’s painted as the underdog throughout the episode and we like seeing underdogs win. All of contestants talk about their advantages or disadvantages and for the most part it boils down to this: both Sally and Chris have competed in these kinds of things (national and international pastry competitions) before and Matthew is “just a dessert chef at a restaurant”. To add a further jab at her booted cast mates (and local bakers around the country), Sally points out that she’s better than all of that because she doesn’t bake for the “common palate” and if you want a cupcake from her you are SOL.

But enough of our philosophical tangent – on with the challenge! 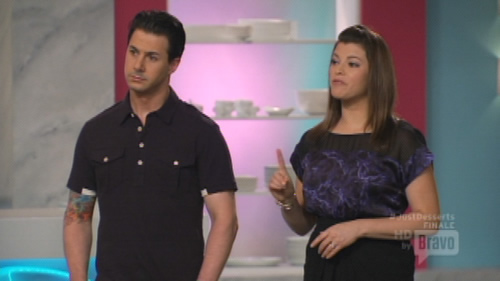 The final challenge is issued by Gail and Johnny. It isn’t that off from what we typically get from Top Chef finales: make a display table which includes the following:

On top of that, they then have to serve a plated dessert to the judges inspired by a loved one. Everyone gets a tad emotional talking about their inspiration for their plated dessert (moms, children, siblings) and this gets us thinking: will we see a repeat of the Top Chef All-Stars episode in which everyone’s mom or spouse showed up, reducing chefs to teary-eyed co-dependents? We need something to kick this episode up a notch. 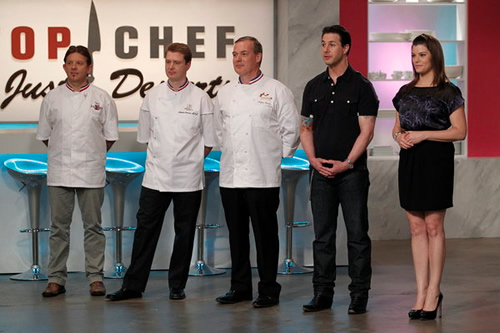 Alas, no surprise family members. Instead, we get three white French guys. Jacques Torres (“Mister Chocolate”), Sebastien Cannone, and Stephane Treand come out. Most viewers undoubtedly only know who Mister Chocolate is, but the contestants sure know who all three are — they’re MOFs, motherfuckers!!

Before you say, “huh?” visit the Wikipedia page for MOF here.

Essentially it’s a title bestowed by the French government every four years to those considered a master of their craft. Looking through the list of crafts covered (and coveted) by the recognition we see a slew of stuff that fascinates us — dentalworks, aesthetic body hygiene, and bras, corsets and lingerie are just a few of the other offerings — but don’t get your hopes up in ever winning since they really only give it to their fellow Frenchmen.

The three MOFs are onsite throughout their first day, acting as advisers and mentors for the finalists. They’ll also be joining in the final tasting the next day. They seem to relish their roles as advisers: they walk around with their arms crossed with stern looks on their faces. Eventually they seem to get bored and don’t know what to do with themselves. The mood lightens, and Sebastian starts helping out — zesting limes, slicing up mango, doing dishes.

[Side note: Again the strange Bravo-Food Network crossover (noticed last week with guest judge Iron Chef Cat Cora getting the opportunity to name drop Iron Chef over and over again) continues with continuous ads running for the new season of the Next Iron Chef.] 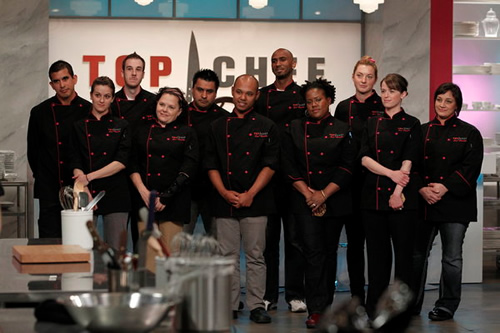 So do we get the family visits today? Nope. Instead of the opportunity for cheap water works, all the “fired” chefs return as a pool of potential sous chefs. Each finalist will get two assistants, the first is a random pick.

Sally draws Vanarin and is clearly displeased, then chooses Orlando. Duh! He’s the king of monstrous chocolate show pieces and for the next 35 minutes many people on the show will comment on her decision to hand over the reins of making her showpiece to Orlando, even going so far as to call it Orlando’s over and over again. 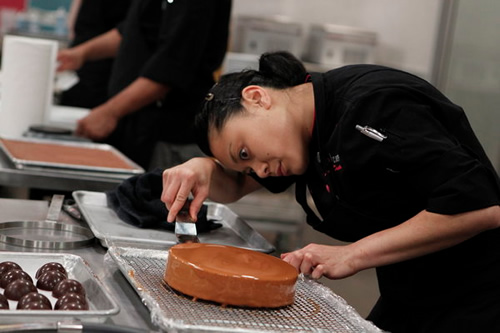 Her display table will also include a great-sounding bread with bacon, sauteed onions, and cheese. Her entremet cake ends up looking fabulous even though she has to remake it since she used the wrong pan inserts (DOH!) and beautiful looking bonbons. Her plated dessert will utilize coffee (for her sister, a caffeine addict) and cashews (for her mom, who has a nut for a daughter).

With Megan and Carlos alongside, Matt makes bonbons containing key lime and speculoos. Speculoos seems to be a new thing for most of the “cast,” which is odd since the Wafels & Dinges truck here in NYC has been serving it, to great results, for years. Come to our shop, we’ll fill you full of this addictive cookie spread (/End plug). Also on the menu is his cake and a loaf of focaccia (DOUG: I so want to eat that.) 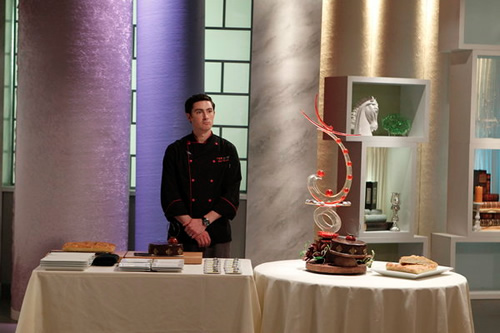 For his showpiece, Matt decides to go the sugar route instead of chocolate. He’s going big or going home — taking on something he’s never done before. We’ll admit for a first time sugar showpiece it’s infinitely better than anything we could’ve attempted so kudos for that. Johnny though, being a sourpuss all episode long, goes off on his decision to try something outside the box when so much is on the line. We feel he would’ve gone off on Matt regardless, telling him he was playing it safe by doing a chocolate showpiece.

His plated dessert is inspired by his wife (and her love of chocolate chip cookies) and his daughter’s apparent love of throwing shit all over the place.

And Chris? Well, Chris works really hard with Rebecca and Amanda assisting. He outright tells them they’ll be doing a lot of standing around for the next ten hours. 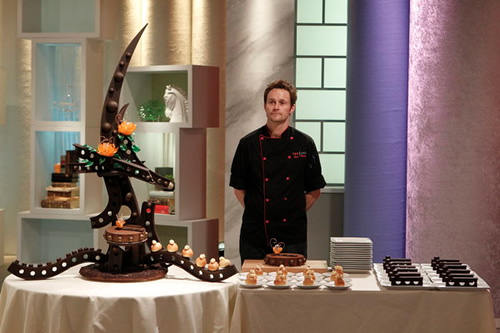 Industrial is his theme and he carries an I-beam motif through everything — his showpiece, the vessel for serving his coffee caramel bonbon, a sheet of paper for no apparent reason on his plated dessert. He too has a great looking cake, but Johnny is irked that one of his brioches fell off the showpiece. Oh and that the maple bacon butter seemed to get more of Chris’ focus than the brioche. Um, hello? We’ll gladly sop up that combination any day of the week! 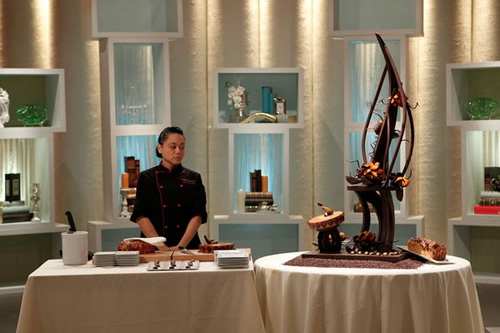 No worries, he quickly gets back to berating Sally for using Orlando to make her showpiece — seemingly ignoring the fact that it was wholly within her right to do that (they’re the ones that gave them two sous chefs in the first place!) and a very smart move on her part as a team leader, assessing her needs and abilities, and dolling out tasks accordingly.

Come to think of it, the bread challenge was a great addition to the finale. We wish that kind of diversity was throughout the whole season – not just crammed into the final episode. 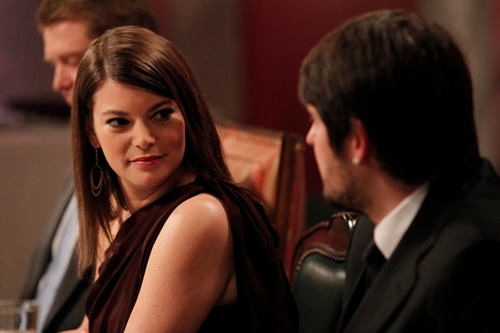 After reviewing the display tables and showpieces and critiquing the bread, bonbons, and cake it’s time for the plated desserts. 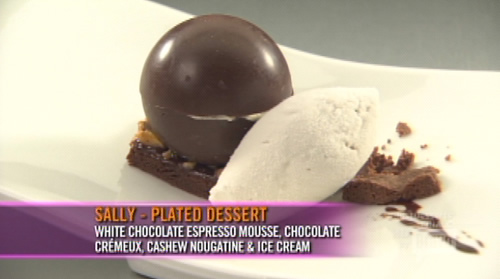 Sally has run short on time, so her big chocolate spheres are left unsealed with an exposed seam. The diners dig the taste (big time), but their unfinished qualities are noted. 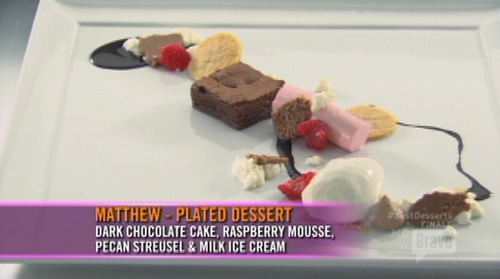 As mentioned, Matthew’s plated dessert is a weird, scattered trail of random stuff that no one seems to know what to do with. 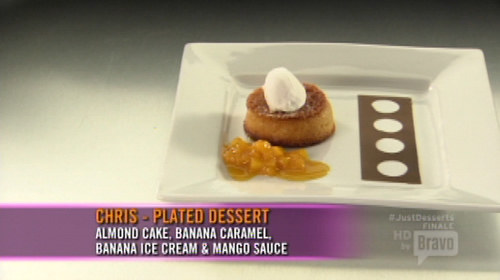 Chris has the most simple, yet beautiful, plate, and it sounds pretty terrific. It seemed to surprise everyone that he went a bit more rustic (and non-chocolate) in his final offering. 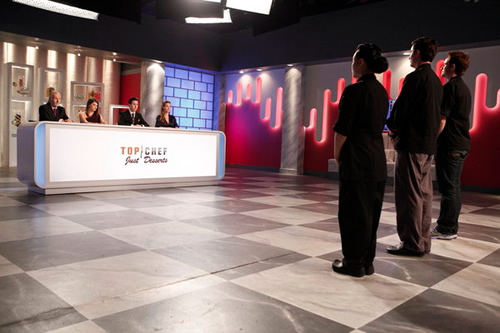 Johnny looks a bit put-out the whole time. He has obviously had a bug up his ass about something this whole time and takes it out on Sally (over Orlando’s showpiece, natch) and Matthew (just to be a contrarian). He’s obviously in Chris’ court.

The other judge’s aren’t so quick to write Sally off and defend her decisions and the taste of everything she presented.

One thing they can all agree on is Matthew — he’s clearly coming in third and isn’t even a factor when they take all the tastings course by course. For more insight in what Matt experienced in the finale (as well as all season long) check out this interview with Matt here.

The way the discussion is edited, you get the sense that Sally will be the winner. She’s clearly the favorite from a taste perspective. However, with all the other contestants back on hand to celebrate, it’s superstar Chris who wins. We get some more tears, awkward reactions from those booted before, and a bizarre champagne facial. No wonder we had nightmares last night.

It’s done. We’re going to take our whisks and beat it. Big Gay out.