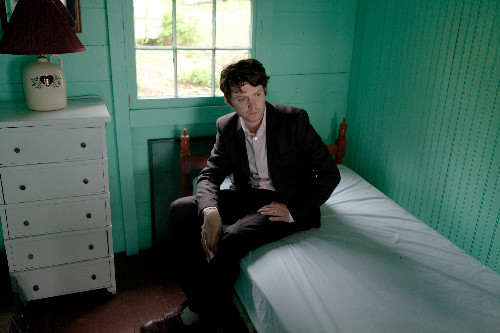 Zach Condon, sitting in a room, thinking about chile.

When Zach Condon of the group Beirut got on the phone for an interview last week, he didn't want to talk about his band or about "The Rip Tide," his first album in four years. He didn't even want to talk about restaurants in Brooklyn, where he now lives. He wanted to talk New Mexico chile. What follows is the transcript of an eleven-minute conversation spent discussing the ukelele man's obsession with his home state's "best-kept secret," a pepper that goes with anything and makes even the most nostalgic and hip musicians batshit enthusiastic.

What do you get there?
What I love about the place is that you barely have to decide. You can basically pick ten items off the menu and share. I love a restaurant that tells you what they do best. But yeah, I actually wanted to use this as a platform to promote northern New Mexican food.

Go ahead.
Well, we go to New Mexico twice a year. We just got back from the chile roast. It's the end of the season right now, and we brought back about twelve pounds of green chile.

What makes it so special?
Here's the thing: there's a very specific type of chile that only exists, quite literally, basically between Albuquerque and a little bit north of Santa Fe. You can't find it anywhere else in the world, let alone the southwest, and it always gets overshadowed with, you know, like Austin bragging about their fucking breakfast tacos like it was the biggest invention of the century and that kind of thing. And of course, Tex-Mex has completely drowned out any and all talk of real Mexican food and especially northern New Mexican food [takes a breath, laughs]. It's such a shame that it has been so ignored and looked over.

Can you describe the chile?
It's actually vegetarian, except for if they put lard in the roux. So, imagine this finely diced pepper, I guess. It has an official name that no one knows. South of Albuquerque they grow green chile, and north of Santa Fe, they grow red chile. They are very distinct: red is very smokey, and green is just very savory. It's a sauce mixed in with cheese, basically. [Condon sent over this link, which shows several dishes using the chile]

When do you eat it?
Basically every meal — breakfast, lunch, and dinner — is smothered with green or red chile. There's no meat in it. If you can imagine, it's nothing like Tex-Mex. You almost have to ignore everything you know about beans, tomato, and meat — or whatever they make other kinds of chile with. You roast these chiles that only grow in northern New Mexico, you chop them up, and you smother breakfast, lunch, and dinner with them: breakfast burritos, chile rellenos, huevos rancheros, you name it. They pile it high. I consider it to be the curry of the southwest, to an extent, just to give you an idea of the consistency. Highly, highly addictive. Actually, it's been proven addictive because of the endorphins.

You are obsessed.
This is my complete and utter obsession. We take the van to New Mexico at least once a year, especially during September, which is chile roasting season.

How does that work?
Basically they set up shop in parking lots all around Santa Fe and Albuquerque, and you can literally follow your nose. So you drive around, you smell roasted chile, and you pull over if you like what you smell. They throw these things on a gas burner, they spin it around for ten minutes, and then throw it in a bag. Everyone is there, from grandmothers to restaurants.

Do you eat it in restaurants, as well, or just make it at home?
In New Mexico it is in every restaurant. They put it on pizza, they put it on burgers. But I can't find it elsewhere, so I make it for myself.

How long will this most recent stock last you?
Twelve pounds, between my friends and me, will last about two or three months. Basically everyone gets together and we do these giant, giant crockpots of it and for the next month will eat it with everything.

What are some of your favorite things to make with it?
My favorite is chile relleno, which is beer-battered, fried poblano chiles with cheese inside and refried beans. And of course, the secret ingredient is the chile. It's funny, there isn't much variation but it doesn't matter, because it's awesome. But it seems to be overshadowed by the people around us, who scream louder about their food.

There seems to be a measure of resentment.
There is, to an extent. What happens is that people who visit New Mexico are never introduced to it, because it's such a well-kept secret; when they go to restaurants, they'll see something like fajitas, which they are familiar with, and order that. But it doesn't come with the chile.

Do you take the stuff on the road with you?
You can't. It takes a lot of time to prepare. You have to peel the skins, dice it — a pretty intense process. By the end, your eyes and hands are burning, and you're coughing because it's in the air.

How did you get so into it?
Goading from my parents. It's like a rite of passage in New Mexico. You reach a certain age, and they expect you to start topping your meals with more and more chile. You get some weird looks if you avoid it. Every home has their own recipe.

Do you think you can spread the gospel?
That's what I'm hoping. We were in Portland the other day, and there's members of the Shins who live there. But they're originally from Albuquerque, and one of the guys opened up a New Mexican restaurant, and he imports Hatch green chile up there. We hit a place in Colorado that did a desperate attempt at it but didn't quite make it. That's the thing, even in Denver they still can't do it right or even really know what it is.

And, finally, do you ever tire of it?
I eat myself sick on it when I am in New Mexico. I refuse to have any other meal in Santa Fe, because I feel that the time would be wasted otherwise. I've downed three burritos in one day before dinner. It's the kind of place where you eat until you make yourself sick and you puke so that you can keep eating it. It's ridiculous. I actually try to prepare before we go and expand my stomach.