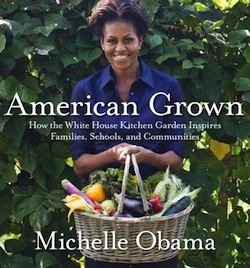 As announced previously, Michelle Obama's gardening book/cookbook will be released April 10 by Crown Publishing (pre-order from the publisher), and as of yesterday it has a title and a cover. American Grown will explain Obama's motivations for planting a vegetable garden at the White House — the first since Eleanor Roosevelt's Victory Garden during WWII — and will include recipes and gardening tips.

It will be released at the same time as a digital version of the book. (Alas, fewer details are available on that.) Mrs. Obama will donate her proceeds from both to a yet-to-be-named charity. Below, a larger image of the cover as well as a press release. 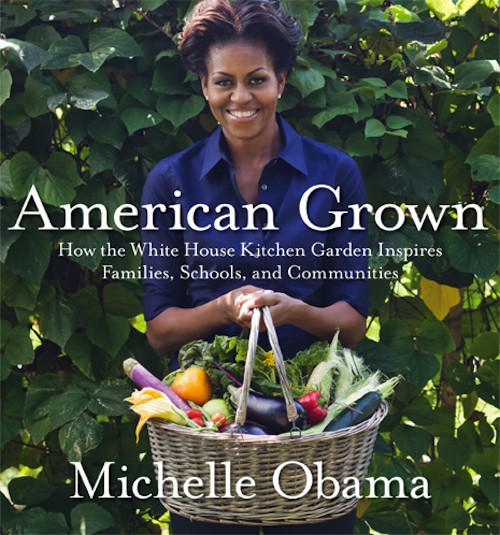 The book, Mrs. Obama’s first, will be issued simultaneously in print and digital editions. The print edition will be a gorgeously illustrated four-color hardcover that includes stunning photographs of the White House garden and Mrs. Obama throughout the seasons, as well as other community and school gardens from around the country. Mrs. Obama accepted no advance for the book and will donate all net or after-tax author proceeds to a charity or charities to be named later. Random House, Inc. will also make a donation to an appropriate charity to be named later.

The title and publication date were announced by Maya Mavjee, President and Publisher of the Crown Publishing Group. The book jacket art was also unveiled today and is available at www.crownpublishing.com.

Through telling the story of the White House kitchen garden, Mrs. Obama will explore in American Grown how increased access to healthy, affordable food can promote better eating habits and improve health of families and communities across America. Mrs. Obama will describe how her daughters Sasha and Malia were catalysts for change in her own family’s eating behavior, which inspired Mrs. Obama to plant an edible garden on the South Lawn – the first since Eleanor Roosevelt’s “Victory Garden” planted during World War II. The book will be inspirational and instructive and will provide ideas and resources for readers to get involved in the movement to create community, school, and urban gardens, support local farmers’ markets, and make small lifestyle changes to achieve big health results.

Since entering the White House, Mrs. Obama has emerged as a passionate advocate for healthful eating and exercise. In February 2010 she launched Let’s Move!, a nationwide initiative to address the epidemic of childhood obesity by empowering parents and caregivers with information, improving food quality in schools, increasing access to healthy, affordable food, and encouraging increased physical activity.

The book will speak to these issues which Mrs. Obama has strongly advocated for and will also include practical ideas, recipes, resources and tips on how to begin a garden of any size, anywhere.

“American Grown is the perfect title for a book in which the First Lady will celebrate the benefits of American community, school, and urban gardens and of healthy, nutritious food for our nation’s families and communities,” said Maya Mavjee.

The parent company of Random House, Inc. is Bertelsmann AG.