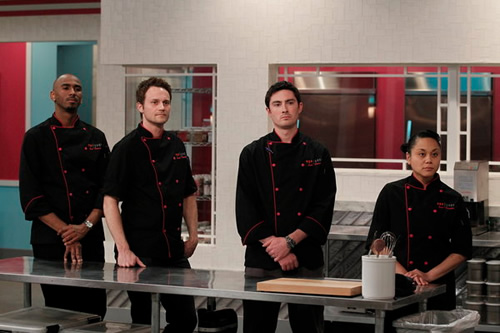 Breath easier: we’re down to the the final two episodes. Our national nightmare is nearly at an end.

Before we can begin, we need time to remember our last fallen hero. At breakfast in the loft, our remaining contestants honor Papi (aka Carlos) with Cap’n Crunch cereal. And with that ceremonial pour, everything goes down the drain. 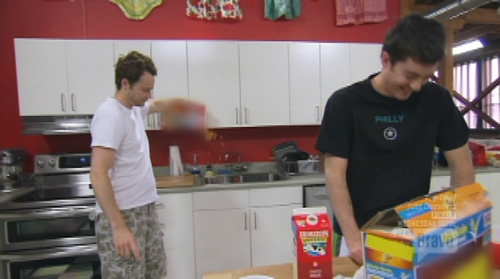 (Interesting side note – the contestants can talk about Cap’n Crunch by name but can’t actually show it? The box is blurred.)

Once we’re finished with memory lane, the last four suit up and head out. When they get to the Top Chef kitchen, Gail drops the news that they have no need for a Quickfire and are skipping right to the Elimination Challenge. The contestants are misled to believe they are creating desserts based on the countries of their choosing (from a selection of little flags), but what they really have to do is create a dessert that looks just like a savory dish based on their country of choice. 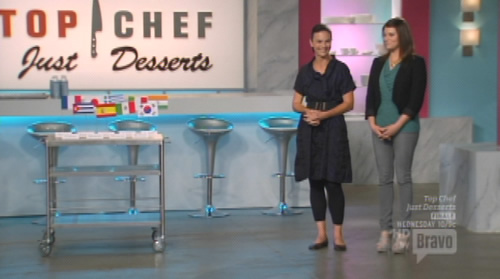 Funny — this is exactly what got Papi eliminated in the previous episode, when he made a dessert that looked like a burger, fries, and a shake. The top three will move on to the finale and one will be sent packing. To inspire us we get to see shots of things like buffalo wings that are actually made out of dark chocolate and fondant. Hmmm. That isn’t really boosting our confidence. 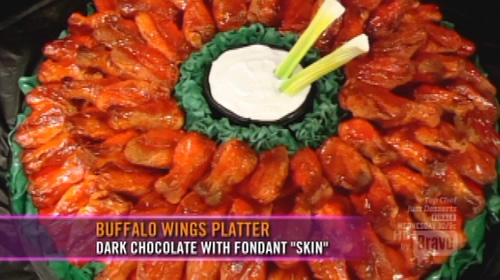 While Suzanne Goin (from LA’s Lucques) is on hand to issue the challenge, we’re repeatedly reminded that “Iron Chef Cat Cora” is the guest judge. Indeed she gets a lot of quotes and screen time and repeatedly we get references to Iron Chef. What network are we watching again? How much was paid for Bravo to turn their penultimate episode of the season into a Food Network infomercial?

After the challenge is issued, we get a lot of “quality time” with each of the contestants in an apparent attempt to make us care about these people. Unfortunately there’s absolutely nothing that can be said to do that. You can’t paint these people as rude or asses or self-proclaimed bitches for eight episodes and suddenly, because they’re the only ones left, try to get us to care about them. No amount of childhood photos will win us back. 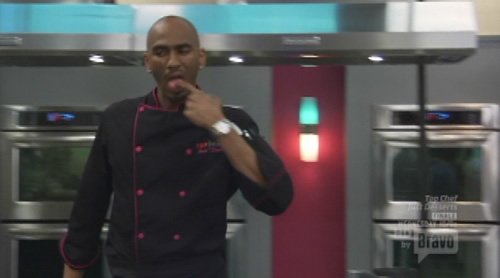 Taking them on personality alone, the only one we care about is Matthew, who has never said a bad thing about anyone the entire season. (And, because we have never actually TASTED anything they made on the show what more can we go on to root for our favorites?) All the chefs are getting along far too well. Orlando has been humbled, Sally doesn’t have other women around to make her insecure, and we have seen that she both folds her clothes AND makes her bed. The bromance between Chris and Matt is still in full swing. There’s no longer conflict among the cast, which is nice — they are all acting like adults. But it sure doesn’t leave us much to rip on.

At a certain point Chris starts taking about his passion and upbringing over a montage of photos. About half-way through it we realize our eyes have started to glaze over — even sitting on the sofa at home — and we’ve completely spaced out over half of what he said. We also get to hear about Orlando coming out to his parents, Sally being a dick to everyone in her life to advance her career, and Matthew’s delinquent behavior growing up.

Sally chooses Cuba as her country and immediately regrets her decision. She spends half the first day of cooking unsure of what to do, making two dishes simultaneously before deciding on a Cuban sandwich after Johnny’s visit. Sally seems downtrodden and hopeless, and at this point our money was on Sally getting her walking papers.

Matthew gets Italian and immediately thinks manicotti. For Spain, Orlando goes with paella. For his French dish, Chris goes with Beef Wellington which turns into a discussion with Johnny over the actual origin of the dish. Just Google “beef wellington history” and you’ll get plenty of information on its history. 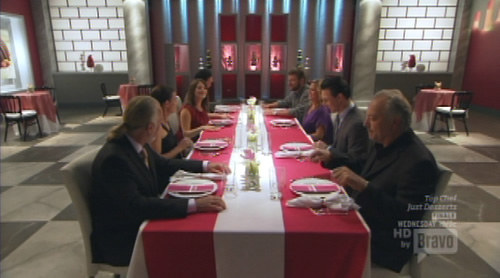 After serving to the judges, we get an interlude devoted to the beauty that is “Iron Chef Cat Cora.” Sally calls ICCC a hot mama and Matthew goes off even more on her looks. For not the first time this season he tells us he loves his wife. Poor Matthew, he really needs to get laid. ICCC’s hair extensions ARE looking pretty good, though. Okay, enough about ICCC. 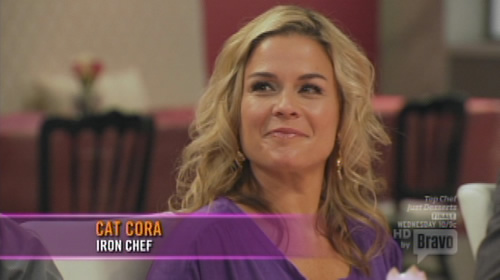 Sally’s Cuban sandwich is awfully impressive looking, especially for being so indecisive for most of the challenge. Cream cheese and pineapple makes us think of things our grandmothers made with Jell-O and canned fruit cocktail (heavy syrup, of course). We gag a bit at the thought of the combination, but the judges mustn’t have had such a grandmother and thus no such association — so they dig it okay. 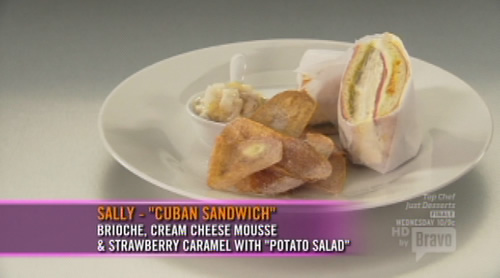 Chris’ Beef Wellington looks awfully good too — especially since he ended up with actual puff pastry. Funny enough, we see Johnny look down and bring up his phone’s Wiki app while eating the dessert to verify whether or not Beef Wellington is an English or French dish. And we know that because we were reading the exact same thing on Wikipedia at the exact same time. 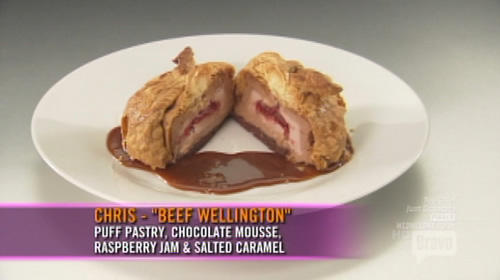 Orlando’s paella looks amateurish. While the presentation in a pan helps, he is dinged for sloppy rice prep and not going far enough with his concept. 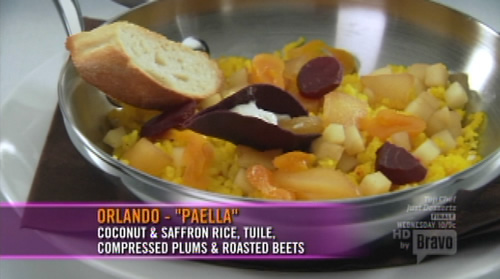 Matthew’s manicotti looks like, well, manicotti, and gets high marks for appearance. Unfortunately they find the taste and texture to be one note and no one actually wants to finish his dessert. 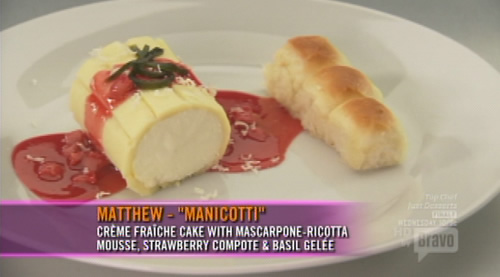 Like clockwork, when ICCC announces Sally as the winner of the challenge we get a shot of Chris’ raised eyebrows. She’s the first one moving on to the finale. Fortunately for Chris, he doesn’t have long to wait to find out he also moved on. 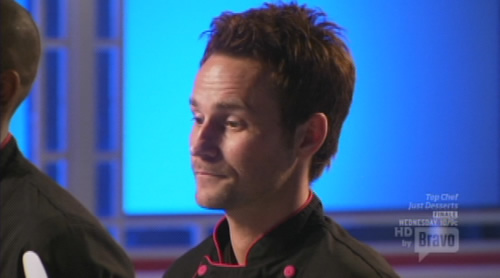 Which leaves us with Orlando and Matthew left standing — will we get vindication for Orlando’s self-proclaimed bitchiness all season and watch him go home? Will the producers pull a Project Runway on us and bring both along to the finale (something we’re pretty sure Top Chef has done too)? Or will we actually get the show’s ‘bad boy’ making it all the way to the end by knocking out the last good guy?

Tension is mounting as we get shots of everyone’s stoic face. And from somewhere in the crowd we hear the chanting begin. Hesitant at first. But the repressed masses have found their voice. They are ready for a change.

The humbled Orlando bawls, and is no longer loathsome. Of all the times to get booted from the competition, there is no doubt that making it all the way through — but falling just short of the finale — must sting the most for him. Ugh! 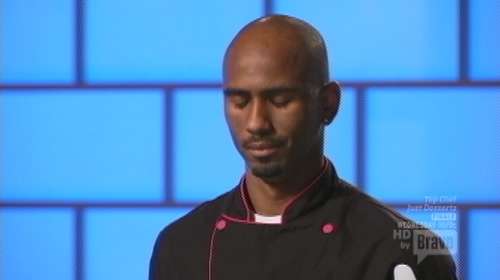