Mayer Hawthorne Likes Everything With Spaghetti

Share All sharing options for: Mayer Hawthorne Likes Everything With Spaghetti 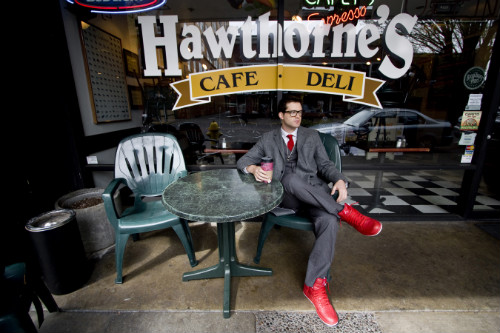 Fresh off an appearance on Conan on Monday and just over a week after the release of his new album "How Do You Do," neo-soul phenomenon / smooth bespectacled dork Mayer Hawthorne got on the phone to chat about how much he loves eating out. From chili dogs and burgers in his native Michigan to late-night meals at L.A. classic Dan Tana's, the guy is obsessed to the point where he claims food might eclipse music in importance while he's on tour.

Ready to talk food and restaurants?
I am at the Cracker Barrel restaurant right now, paying for the food that I am about to eat.

What did you get?
I got the Old Country Breakfast. It's like eggs, hash brown casserole, biscuits, and all that good stuff.

Have you had dinner anywhere recently that stands out?
Let me take my phone out, since I take photos of all my food. We were just in L.A., so I got my Umami Burger, which is one of my favorites.

What do you order there?
It's all about The Hatch Burger for me. Five types of green chilis and their house American cheese.

You're based in L.A., so what are some other spots you like in that area?
L.A. is full of them. My new favorite sit-down spot is this place called Dan Tana's.

Oh yeah, the old-school place on Santa Monica.
I love that spot, man! I'm obsessed with it right now. It's been there forever.

And what do you like there?
It's all about the chicken parmigiana. Everything comes with spaghetti there, which is the best part about it.

Any other places?
The Apple Pan is the shit. That is the best banana cream pie in the world. Where else? Oh shit, Tacos Leo is great. That's my favorite taco truck out there. You know, L.A. is Mexico. It's basically Mexico, so the Mexican food is as good as it gets. Paco's Tacos on Centinela is also the shit.

How about favorites when you're on the road or traveling?
One of the ones that I always try to hit when I'm on tour is the Loveless Café in Nashville. There are so many. That spot is amazing. It's just the greatest southern, homestyle comfort food. They make their own jam there. Amazing kinds of jam and biscuits. It's one of those real gems of the south.

I love Indian food. I like all kinds of curries. Whenever I'm in New York, I'm really looking forward to hitting Milon, which is part of that crazy little Indian complex in the East Village. The place has all the crazy chili pepper Christmas lights. There's four different Indian restaurants that are all in the same place — two upstairs, two downstairs. That spot is off the chain. It's just super fun. The dudes that work there are all hilarious. The pappadam is really on point, all the curries are really, really good, and the mango chutney is fantastic.

A lot of bands talk about how crappy the eating is on the road. Doesn't sound like that's the case for you.
That's really what touring is all about for me. If you're not eating well on the road, then you're messing up [laughs]. For me, it's almost more about the food than it is about the music.

So it's just an excuse to hit your favorite restaurants?
Exactly.

What are they known for?
Chili dogs. We call them "Coney Dogs." Whenever I go to Detroit, it's a race to see how many places I can go to in the few days that I am there.

There's a ridiculous breakfast spot called the North Side Grill. They make these unbelievable scrambles, and they serve everything with Clancy's Fancy Hot Sauce, which is the illest; it's made right in Ann Arbor.

You were recently on "Live From Daryl's House." I hear the catering he sets up is insane.
Yeah, they had amazing food there, for sure. They roasted a pig the day that I was there. We did a bourbon tasting there. A rep from Jim Beam was there, and we did a crazy sampling. Daryl's definitely all about his food — a man after my own heart.

Do you care about music in restaurants or do you tune out?
Man, that's a good question. I've never been asked that. I mean, I'm a musician so I notice the music everywhere, definitely. Apple Pan used to have a jukebox, which was awesome. Anywhere that has a jukebox is always a good call.

There was a spot in Ann Arbor that isn't there anymore. It was called Back Room Pizza. They used to play thrashing death metal at like ridiculously loud volumes, so you could barely talk in there. Raging death metal. I used to love that shit.

Any last words?
I could talk about food forever, so this is the best interview I've done in a long time.