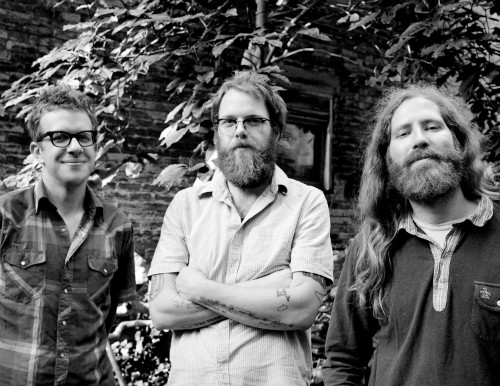 The North Carolina band Megafaun are known and praised for their particular psych-folk, and their new self-titled album, released late last month, is getting raves. In addition to calling it their "most rewarding LP yet," Pitchfork describes how "they're still reliably surprising, their sleepily shapeshifting folk-rock quietly but confidently winding its way through the annals of American music." A few months earlier, Rolling Stone deemed them a band to watch.

Earlier this morning, I had a chance to talk to lead man Brad Cook about his eating habits, and he and the band don't mess around when it comes to food. They plan tours around restaurant visits, love the food of David Chang and Ashley Christensen, and cook plenty — from simple chili to Thomas Keller recipes.

So, we're supposed to talk food and restaurants.
This is right in my wheelhouse, man.

What did you have for dinner last night?
The tour ended in San Diego last night, and simultaneously our van transmission died right outside of San Diego. So yesterday we grilled out at a friend's house and made all kinds of stuff. We made chicken wings, curry potato salad, some beer brats that we stewed for five hours. It was typical picnic material.

Before that, also in San Diego, we went to a sushi place called Harney. Phenomenal.

Is it traditional sushi?
Pretty hip, kind of. I refer to it as "stunt rolls." They had one called "The Flaming Lip" that had sriracha, jalapeños, and a non-traditional sauce on top.

You're based in North Carolina. Where do you like to eat out there?
We cook at home a lot, but we have one of the best chefs in America in our area. Her name is Ashley Christensen. She runs a place which is my favorite restaurant in America: Poole's Diner. She just opened two more places, one of which is Beasley's Chicken and Honey — just fried chicken and waffles with very select southern sides done really, really well. Really clean. She's pretty regional and farm-to-table, using resources from a 200-mile radius of where we live. She was just on Iron Chef recently. Just awesome.

What do you like about Poole's?
She's not a classically-trained chef, so she just has an amazing intuition into technique and selection and simplicity. It's mind-blowing. The most famous thing on the menu there is the macaroni and cheese, and she does a lot with heirloom tomatoes and beets.

What do you like to cook at home?
At home, my girlfriend and I try new things a lot. We have Thomas Keller's "Ad Hoc At Home," which we use plenty. It has wonderful explanations on how to make complicated things more simply. But we change it up a lot. I love making breakfast when we have bands staying over or there are friends in town. The most recent thing we made before tour was that our bass player Nick made a crazy good smoked chipotle chili with a chicken tortilla stew.

How about memorable meals in your travels?
On this trip, we went to Momofuku Noodle Bar in New York a couple of times. The steamed pork buns are obviously pretty incredible, as well as a brussels sprouts salad and a spicy ramen dish. In Seattle, we went to Paseo, which is like this Mediterranean/Cuban sandwich shop right on the Sound. They had a spicy scallop sandwich that was incredible. Probably some of the best sandwiches I've had in my life.

Any show-stopping meals abroad?
We played a show in Pisa, in Italy. They took us to this old, old restaurant that had maybe been around for four-hundred years. A family-owned place. Ten courses of some of the best food I've ever had in my life.

What did you eat?
The dish that stands out the most had rabbit — it was the first time I ever tried rabbit. It was a rabbit gnocchi.

I think there are lots of parallels between chefs and musicians in terms of energy and outlook and vibe. We have a lot of friends that cook at restaurants. So I'll love being at a place that's doing baller food and playing the new National record. Anything kind of current or contemporary lets me know that the place is being run by people who don't take themselves too seriously.

Any last words?
There are bands that probably choose landmarks or nature in terms of how to see the world on their own when they're on tour, but food is the one luxury we try to seek out when we are going around the country. There's this sense of comfort when you come back to a place you really know and trust. There are places we've gone to maybe ten times.

What are some of those?
The single most eaten-at restaurant for our band is Kuma's Corner in Chicago. I don't think we've missed Kuma's in five years. This time, we did Kuma's the night we got into town and Hot Doug's the next morning. We kind of loaded up on gourmet meat pretty hard.