Share All sharing options for: Diners, Drive-Ins, and Disasters 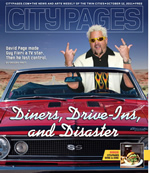 Don't miss this story in Minneapolis' City Pages about David Page, the producer of Diners, Drive-ins and Dives that "made Guy Fieri a star." Following the lawsuit (now settled) against the Food Network for dropping his production company, Page shares tons of venom for Fieri: "You have to protect Guy from all of his poop jokes," Page said. "When cutting the show, you had to tell the editors to watch Guy's eye line, because it's always on breasts." Fieri is accused of many crazy things, including being "weirded out" by gay people and shafting Page on money from the bestselling DDD books. Update: a spokesman for Fieri gave Eater a comment. [City Pages]