Share All sharing options for: Top Chef Just Desserts, Episode 8: At the Carnival 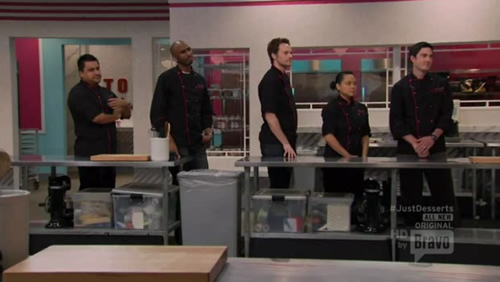 We’re down to five chefs milling (and later drinking) around the apartment. Sally seems quite pleased to be the last female contestant, and they guys are... there. Let’s just skip it all and get over to the Quickfire, okay? 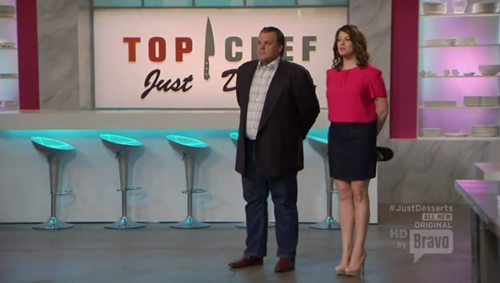 Hello there, guest judge Francois Payard. How are you? I hope you’re half as well as your macarons, which are as delicious as anything can possibly be. The remaining contestants seem to be visibly shaking in their boots with him in the kitchen. Gail (her hair is wavy and sassy today — perfect macaron hair [?]) issues the challenge: “Bake us a pie with one hand tied behind your back,” and says to “channel your inner Rebecca.” Dammit, don’t remind us that Rebecca is gone. 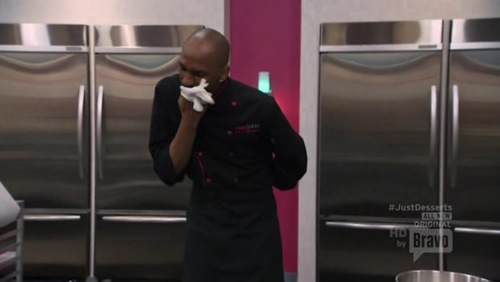 The chefs get off to a spastic start, knocking into crap and sawing open water bottles with serrated knives. It’s a bit gross to watch Orlando stretching on a latex glove using his mouth. Doesn’t getting your lips onto the exposed side sort of defeat the reasons you might be putting a glove on? Eww. 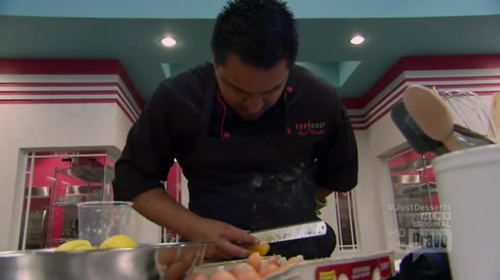 Everyone makes a huge god-damned mess, one that any self-respecting mother would be horrified to see their child making on TV. Although watching Carlos zest a lemon with his stomach sure wasn’t something we would’ve imagined seeing at the start of the show — nor would we imagine seeing him (along with Orlando and Matthew) later in the episode during a drinking game all own up to having been in three-ways. Wha-what?!

While trying to slice plums with one hand, Sally informs us that “the French love tart things” so she’s going to impress Payard through that stereotyped love. Matthew explains that rhubarb is “essentially tart” and does the same.

- Orlando’s mixed berry pie with meringue is very pretty and apparently tasty - it lands him in the top two.
- Matthew’s tastes... Oops! He used the illegal hand and gets disqualified, so it doesn’t matter.
- Chris whipped up a banana cream pie that sounded overloaded with banana, but actually got dinged for not being “banana-y” enough. Cue surprised eyebrows. Cue Chris landing in the bottom. Cue even more surprised eyebrows — this time with musical accompaniment.
- Sally also ends up in the bottom, so she decides to do the intelligent thing and mock Payard’s accent in the confessional. Yeah, that’ll go over well if and when you ever do bump into him again after the TV show.

But it’s Papi that wins again, collecting another $5000 for his raspberry lemon meringue pie.

So far Carlos has been knocking it out of the park during Quickfires, but staggering during the Elimination Challenge. If you have any hope that things change this episode then put those dreams to bed. Although we do get thrown a few curveballs during the Quickfire when we see nostalgic shots of Matthew as a kid and a little Sally wearing a giant toque. But alas, those are just red herrings dropped by magical elves (ahem!) to take our minds off the inevitable and hope that maybe we’ll actually see something we can’t predict happen.

The challenge: elevate a carnival dessert for a party with 150 guests. The kicker: the party’s host is Dana Cowin, editor-in-chief of Food & Wine magazine. The curveball: they only get three hours to cook - the shortest amount of time so far this season. 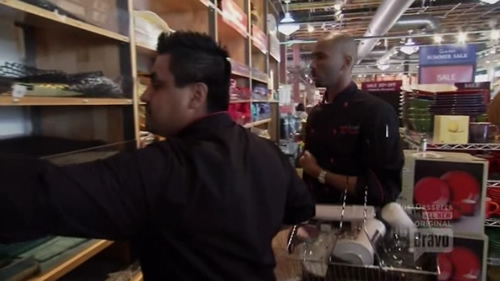 Before they can begin, we them running through Sur La Table spending free cash to help enhance their carnival theme. Chris (who already gave in to the product placement gods earlier this season) kneels to them again and calls SLT a “wonderland!” We watch them traipsing willy-nilly through aisles made of Metro Shelving and all we can think about are those poor souls that had to assemble those shelves.

Back in the kitchen they’re just as frantic as they were when they had one hand tied behind their back. At some point during their three-hour whirlwind Johnny makes an appearance to offer up advice and guidance. Once again everything he says makes perfect sense, and once again most of it falls on deaf ears. 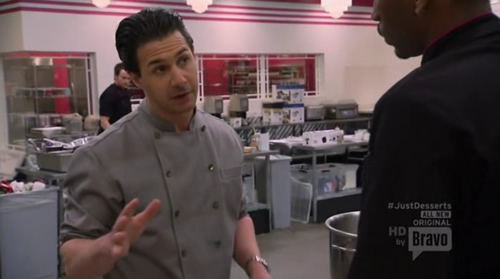 - Chris is once again making ice cream with the Pacojets and we get flashbacks to his gummy ice cream at the water park. In addition to that we get funnel cakes and agar (seaweed) gelee. Hm, are those surprised eyebrows we see in the horizon?
- Sally seems to be doing her ode to corn, whipping up everything she can come up with made out of corn for the judges except ethanol. Vroom vroom!
- Matthew makes mini fried apple pies.
- Orlando does yet another play/take/twist/homage, this time to the candy apple. His play on it somehow involved a layered cake and chocolate mousse. We get “WTF?” looks from Johnny as Orlando describes this, but he goes forward with it anyway. So much for learning a thing or two from your previous mistakes (coughrootbeerfloatcough!)
- Carlos makes burger, fries, and a shake. What you ask? See below.

During the carnival we’re upset: there are no 800lb prizing winning pigs, no geeks biting the heads off chickens, no rickety rides, no lecherous carnies and no cotton candy. On top of that? No judges in costumes! Pheh!
? 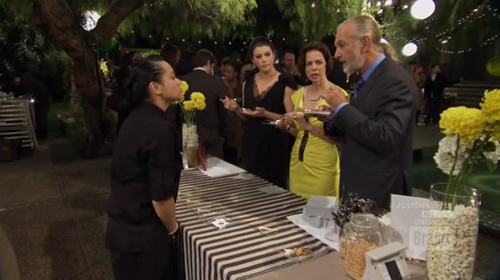 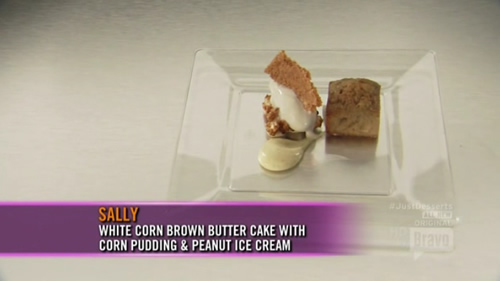 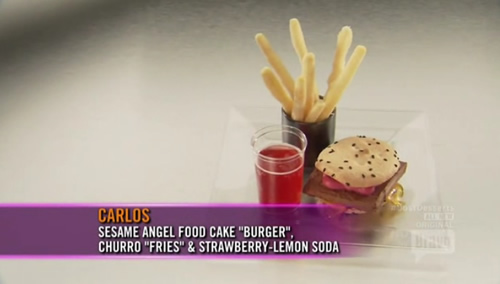 Carlos’ burger, fries, and soda? The “burger” is angel food cake, and the “fries” are churros. Food-that-looks-like-other-food is a dangerous game to play — the burger is a little disturbing (it looks like a toy version of a hunk of foie gras on a poppy bagel) but the churros are damned cute as fries. Johnny and Francois seem to dig it, but the guests note that the churros were cold. 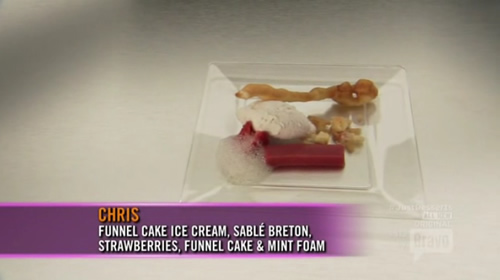 Chris concocts a Funnel Cake Ice Cream, Sable Breton, Strawberries, Funnel Cake and Mint Foam. It looks like a pile of junk, really- and the judges seem bored by all of the overactive components. It’s hot, it’s cold, it’s fried, it’s frozen. It slices and dices and juliennes, but if you put a quarter in it doesn’t vibrate- so why bother? 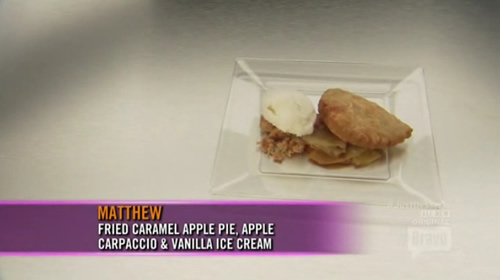 Matthew does his fried Caramel Apple Pie, Apple Carpaccio & Vanilla Ice Cream. It’s not the prettiest plate, but the intention is certainly direct and reasonable. Not much said by judges, but they loved the acidic fresh apple paired with the fried pie. 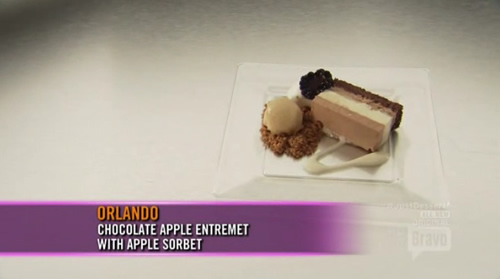 Orlando has made a Chocolate Apple Entremet with Apple Sorbet and lots of other words. It looks fairly nice, but the judges (and other diners) note that it’s not clearly inspired by candy apple as Orlando claims.

In the end, three things we excepted to happen all along actually did:

1. Orlando didn’t win anything. Again.
2. Chris gets in a few more deer in the headlights moments. (Perhaps a spokesperson gig for 1800-CONTACTS is in the works?)
3. And, saddest of all, Carlos was sent packing 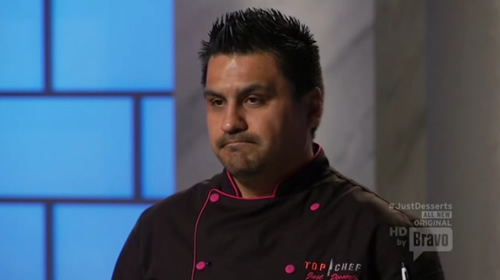 Chin up, papi! You walk away with a bunch of cash and a lot of heart and we’ll always have the moment you owned up to that three-way (ding!). And.... SCENE.