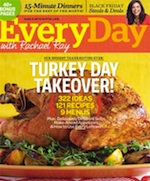 Meredith Corporation announced today that it reached an "agreement in principle with author and television personality Rachael Ray" to buy Every Day with Rachael Ray magazine from the Reader’s Digest Association. Reader's Digest cited "limits on its agreement with Ms. Ray that prevented it from expanding the brand much beyond print."[Eaterwire, Ad Age]