Top Chef All-Stars Episode Five: "Everyone Sucked and Everything Sucked"

Share All sharing options for: Top Chef All-Stars Episode Five: "Everyone Sucked and Everything Sucked" 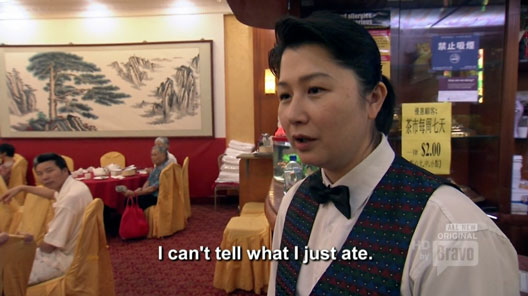 "Mendelsohn out." Those were the very gross words Chef Spike left us with before darting out the back door. He's gone, and we kick off the 100th episode of Top Chef, and the first of 2011, with chefs gossiping about the the events of last episode. Did Angelo sabotage Spike's dish? Probably not. He's just a spaz and can't help futzing, as my dad would say. Antonia says he has chef's Tourette's. Well, then, I wish he swore more? I hope he doesn't punch my second grade teacher in the stomach and then yell "In-school suspension sucks!" like the only other person with Tourette's I've ever known did. Everybody, correctly, remains suspicious of Jamie and her non-cooking. Blais says she's like an octopus, you never see her. What? Is that a phrase? I mean, I literally never see any fish. "Jamie's like a minnow, in that I live in a city and would never ever run across her or it." 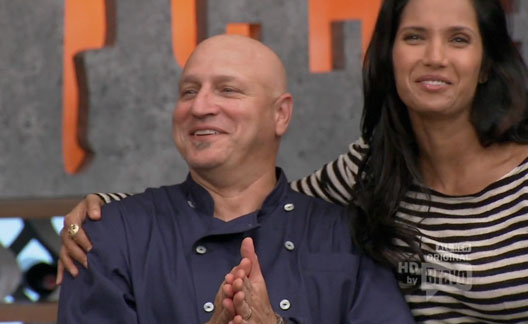 This week's Quickfire is all about speed and also Tom. Tom is in the kitchen! What a historical moment! (If your history book is called "Just Kidding: The Opposite.") (What a terrible name for a history book?) Tom will cook a dish, very quickly, and whoever can make the best dish in that same amount of time wins immunity and a brand new hybrid automobile. Tom gets going, and his mise-en-place is tremendous. The chefs marvel at how each move is synchronized with the next move. Like the move where he dumps fish garbage on Padma's feet.

Tom leaves everybody only eight minutes and thirty-seven seconds to cook. That is not much time, and they are nervous. It is an insane mad rush in the kitchen for ingredients. The only one smart enough to avoid the scramble is Marcel, who runs over and takes Tom's unused bass. I do not like Marcel, but even I was impressed by this. Carla was a little quick on the starting gun.

Dale tries to get egg noodles together, but his dish is nothing. Angelo, despite being instructed specifically not to make a crudo dish, makes a crudo dish. Jamie puts exactly one clam on her plate. (Her other failure is a really terrible joke she tries to make about being fast in bed. Cool? Shut up.)

But I honestly thought everyone would fall on their butts on this one. Blais said he couldn't even pull off making his daughter a PB&J in the morning in eight minutes. But aside from the previously mentioned messes, everybody does a surprisingly impressive job in so little time. Tom's favorites are Isabella, Blais ,and Marcel. Marcel would really like a car. He does not get one.

This week's Elimination Challenge is a lot of food for a lot of people. The chefs have to work together and run a dim sum lunch rush at Chinatown's Grand Harmony. Um, that will be very hard? Fabio, who acts like he's never even seen a picture of a Chinese person, calls it his Nightmare on Elm Street. Don't fall asleep, Fabio! When you micronap is when Chinese Freddy invades your dreams and makes you cook dumplings.

The chefs head back to One Brooklyn Bridge Park to plan. Mike gets to drive his new Prius. Marcel, who was ALL UP in the confessional this episode, makes a very annoying and long fist-pumping joke about Mike in the car. Shame on Marcel for saying it, and shame on the show for including it.

As they plan, Mike offers to expedite, as he has immunity. Jamie again specifically avoids responsibility, and she lets Casey and Carla handle table service. But she also wants to do two dishes? She is the slowest in the kitchen, but she apparently feels a morsel of human emotion and decides to try and make up for her non-performance the last few weeks.

Dale takes ice cubes in his white wine, and Mike Isabella accurately calls him a little girl. There was a lightweight kid in my hall freshman year of college and we used to joke that his drink of choice was half a Miller Lite poured over a pint glass full of crushed ice. It was called a Randy Killer. (His name was Randy.) (I was very funny and well-liked.)

After finishing off his iced wine, Dale has no time for funny business and hanging out. He heads upstairs because he's not there to make friends but to look at pictures of his girlfriend. I am totally on board with that, but it's kind of really intense to keep the pictures of your lady friend in your KNIFE CASE? I know you are a chef, but knife cases are already a little creepy, and pictures of your girlfriend in there look like the sort of thing that later ends up as evidence. 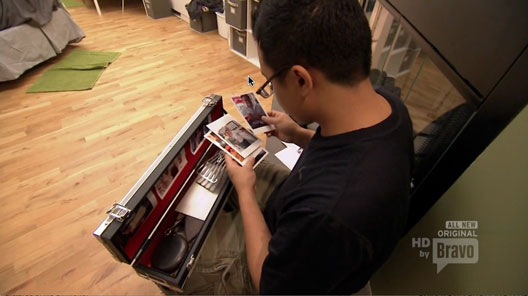 There is also some weirdness that goes on with Antonia getting jalapeno in her eye then Tiffani F. putting a bra on it and then all the guys running out because they are afraid of bras. The girls can't believe the guys can't handle the bra talk, but it seems more that all the ladies were being very weird and unlikable and drunk and that is as good a reason to leave the room as any.

During the weekly Shop-Time, the chefs struggle at a Chinatown grocery store. Everything is in Chinese! They are not Chinese! Imagine how Chinese people must feel everywhere else? Deal with it. Fabio is horrified by the turtles in the aquarium. He has a pet turtle, and he is very attached to it. Um, sure. We all take our turtles for walks on leashes. Every one of us. 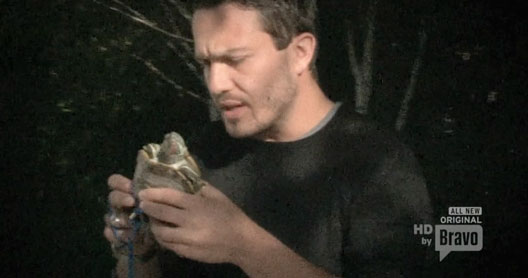 The chefs begin cooking in the Grand Harmony kitchen, and it's a mess in there. There is no grill, and one of the ovens doesn't go above 300 degrees. It is already clear these guys are going to make slop of today's challenge. Antonia is helping with Jamie's dish, and also Casey's dish, and three people are out on the floor, and all the locals look very, very hungry. Casey thinks she will impress everyone with her mega butchering skills, which is why she chose chicken feet. Yeah those will be so good when you cook them your way. 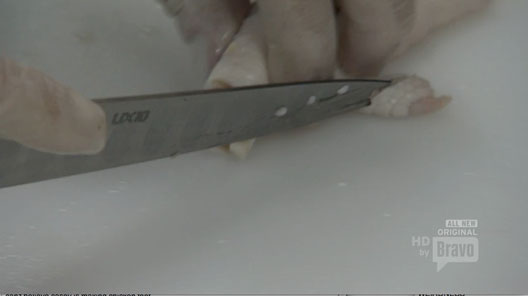 Our judges, including Susur Lee, get their food. But no one else seems to. The diners are angry, confused, and most of all hungry. They reach out and grab at food violently, but they are not entirely happy with what they get. One calls it Caucasian dim sum. It seems there is a revolt coming, and Tom has to go down into the kitchen and yell at everybody. "This is slow sum." These chefs are being terrible bozos. No one is cooking quickly, or putting dishes down. They are making four at a time and then just wandering around. Dale polishes his shoes at one point. What is going on?

Great job, nobody. The chefs all realize they made a mess of things. Dale doesn't expect there to be a winner at all. Casey, Antonia, Carla, Jamie, and Tre are all called in. They are the bottom. Antonia got a bit of a raw deal, as she helped out with Jamie's long beans, that Jamie then overcooked, and Antonia's shrimp toasts were pretty solid. Tre's dessert was "insipid" and Carla's spring rolls had zero flavor. But Casey's chicken feet? Eesh. Inedible. As hungry as the diners were, they left the feet on the plates. And her egg pancake was like lead. Woof.

Tiffany D., Angelo, Dale, and Fabio all make it to the top. Fabio's over the moon. His short ribs magically came together, and he jokes he expected to be eliminated even before the service. But the winner, bouncing back from his poor performance in the Quickfire, and showing off his extensive background working at dim sum, is Dale. He made very good-looking sticky rice. 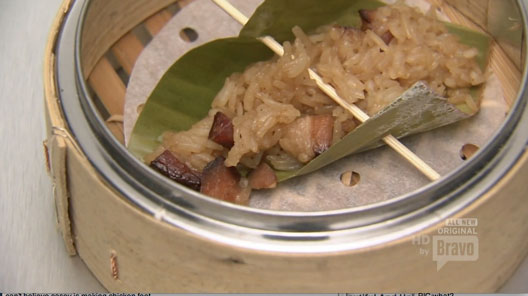 The bottoms are called back. Padma delivers the bad news: Casey. Casey is very surprised! She expected Jamie. So did everybody, including Jamie. Jamie realizes she is very lucky, and we all realize those chicken feet were disgusting.